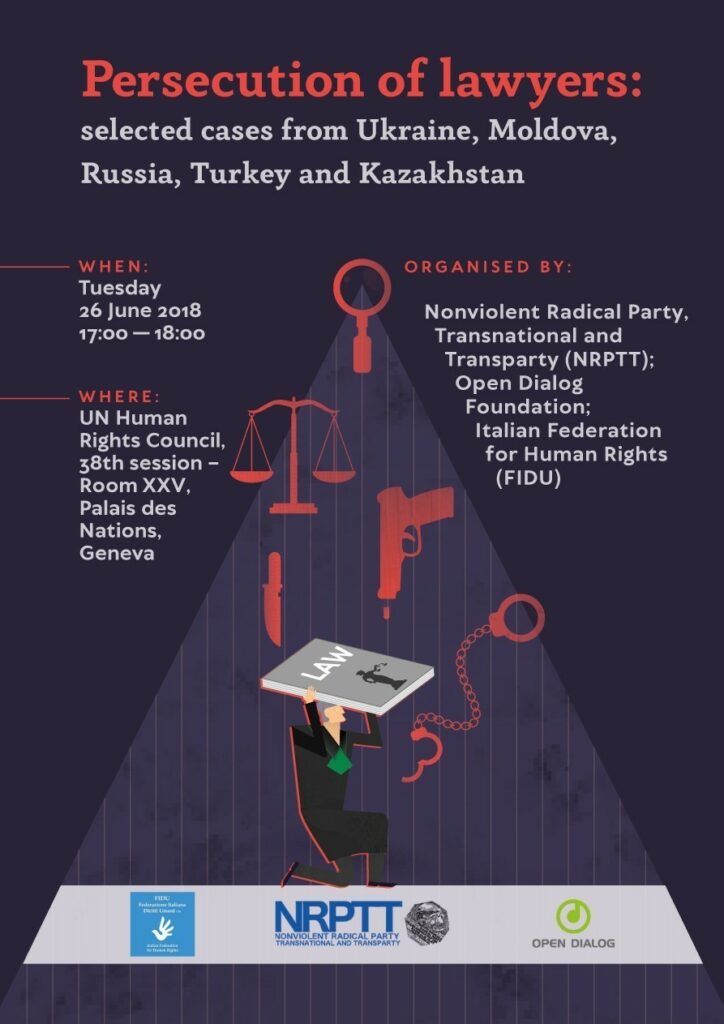 The Open Dialog Foundation and the Italian Federation for Human Rights, with the valued support of the Nonviolent Radical Party, Transnational and Transparty, are pleased to announce the holding of the third event concerning the persecution of lawyers and international instruments for their protection, which will take place on 26 June 2018 at 17:00 in room XXV at the United Nations Palace in Geneva, within the framework of the 38th Human Rights Council.

The lives and ability to practice of lawyers across many countries are often undermined. Lawyers become victims of murder or attempted assassinations, they are targeted with criminal prosecution, and are subjected to beatings, threats, pressure on relatives, illegal searches, surveillance, attempts to withhold licenses of attorneys, and slanderous media campaigns. The need to protect lawyers across countries has also become a priority for the Parliamentary Assembly of the Council of Europe, where, in January 2018, members voted in favour of drafting a European Convention on the Profession of Lawyers.

The persecution of lawyers represents a matter of concern especially in those countries where lawyers who engage in cases of political prosecution become targets of harsh pressures in return. Examples of such episodes from Moldova, Russia, Ukraine, Kazakhstan and Turkey will be presented.

Undoubtedly, the safety of the profession of lawyer is an important prerequisite for strengthening the rule of law and legality in all countries of the post-Soviet region and all the UN member states. Lawyers must be able to practice without fear of reprisals for their actions. It is important that the UN ensure that rules set out in the Basic Principles on the Role of Lawyers be effectively enforced and encourage the adoption of further regional and international agreements on the issue.

This event will be an opportunity to hear testimonies and discuss specific cases and further actions with:

– Mrs Domnica Manole, Moldovan judge of the Appellate Chamber of Chisinau, being prosecuted for refusing to bow to pressure exerted by oligarch Vladimir Plahotniuc to implement a politically motivated decision;

– Mrs Gaini Yerimbetova, mother of Iskander Yerimbetov, a Kazakhstani political prisoner, whose sister Botagoz Jardemalie is a lawyer and political refugee. While in detention, Yerimbetov has been tortured and severely mistreated;

– Mr Mehmet Kasap, a lawyer from Turkey who represents the Arrested Lawyers initiative, a group of Turkish lawyers forced to live in exile as a consequence of the government’s crackdown on human rights defenders and lawyers;

– Mr Patrick Henry, lawyer and Chairperson of the Human Rights committee of the Council of Bars and Law Societies of Europe (CCBE);

– Mr Dmitry Sotnikov, a Russian lawyer known for his work on the politically motivated cases of Ukrainian activist Aleksandr Kostenko, Evgeny Kurakin and Natalia Lutovinova. Sotnikov also defended Vitaliy Buntov, who was a victim of torture and won his case against Russia in the ECHR.

The event will be moderated by: Mrs Lyudmyla Kozlovska, President of the Open Dialog Foundation.