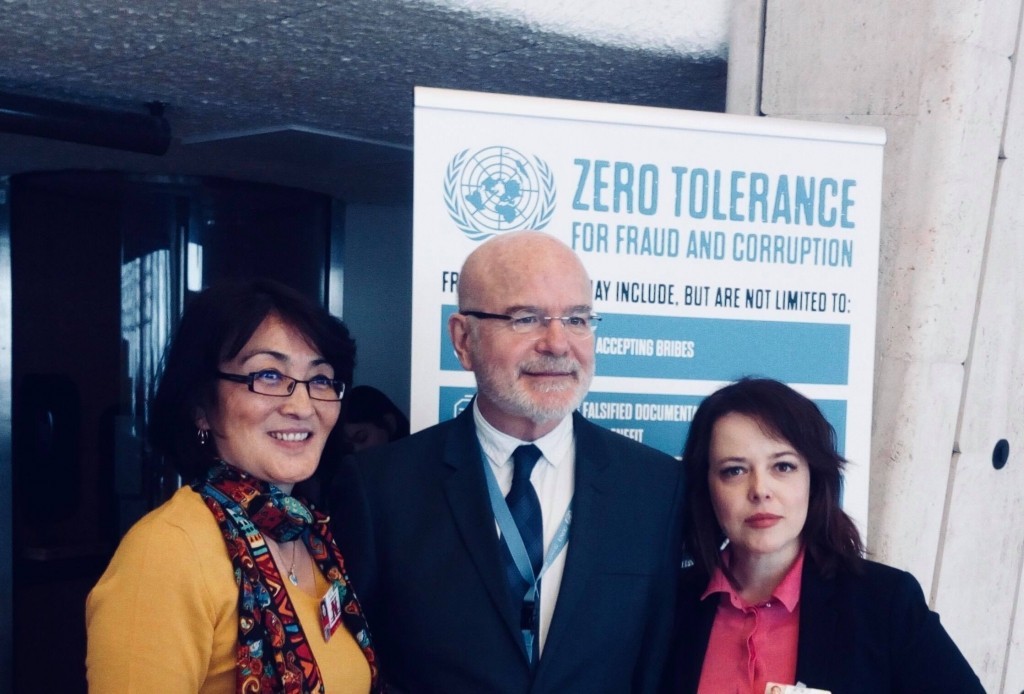 Between 1 and 2 March, 2018, a delegation of defenders from the Open Dialog Foundation met in Geneva on the occasion of the 37th session of the UN Human Rights Council. The protection of endangered lawyers in the post-Soviet region was raised as a topic during individual meetings with Permanent Representations to the United Nations from across Europe and North America and UN human rights bodies.

In attendance with Paola Gaffurini, Advocacy Officer for the Open Dialog Foundation, were two human rights activists, Bakhytzhan Toregozhina and Ana Ursachi, from Kazakhstan and Moldova, respectively. During individual meetings, they highlighted the risks and obstacles that many lawyers encounter in practising the legal profession in non-democratic countries, such as Russia, Moldova, Kazakhstan and Azerbaijan.

Justice advocates had the opportunity to raise a number of cases of persecuted lawyers that are of serious concern to the post-Soviet region. For example, Toregozhina warned about the possible dangers of the draft law On legal practice and assistance, which was submitted by the government of the Republic of Kazakhstan in January 2018 and recently criticised by the UN Special Rapporteur on the Independence of Judges and Lawyers, Mr. Diego García-Sayán. The aforementioned draft law would, indeed, undermine the independence of the Bar Association and would see the participation of executive bodies grow in disciplinary proceedings against attorneys, as well as in attestation commissions.

Similarly, in Russia and Azerbaijan, lawyers that engaged in defending political prisoners have been subjected to threats, intimidations and illegitimate interference from state authorities. In Russia, attorneys of the so-called “hostages of the Kremlin”, Ukrainian citizens unlawfully detained on the territory of the Russian Federation or illegally-occupied Crimea, are subjected to pressures, disciplinary measures and attempts to withhold their license to practise. Examples include, among others, Emil Kurbedinov, Edem Semedlyaev, Nikolay Polozov, Mark Feigin, and Dmitriy Sotnikov).

Likewise, in Azerbaijan, over the last years, political prisoners have been systematically deprived of their rights of defence and episodes of lawyers being expelled from the Bar Association have become more frequent (e.g. attacks were organised against Namizad Safarov, Khalid Bagirov, Elchin Namazov, Alaif Gasanov, Yalchin Imanov, Fakhryaddin Mehtiyev and Elchin Sadykhov). Alarming figures in Azerbaijan show that there are at least 161 political prisoners in the country, and no more than 5-6 lawyers ready to defend them.

Ursachi reported that in the Republic of Moldova judges and lawyers face criminal charges for their legitimate work and have become the targets of attacks and smear campaigns by government authorities. Ursachi, a self-exiled lawyer, recalled her personal case and those of her colleagues that are still working in the country – she mentioned in particular the Moldovan attorney Eduard Rudenco, who replaced Ursachi in many high-profile corruption cases allegedly involving an influential oligarch and politician, Vladimir Plahotniuc. She also recounted the cases of judges Dorin Munteanu and Domnica Manole, who have been punished because of their critical and independent actions against the lack of rule of law in the country.

The mission will be followed up in June 2018 during the next 38th Human Rights Council session and will gather additional voices in order to ensure the safety and the normal performance of the legal profession in the post-Soviet region.