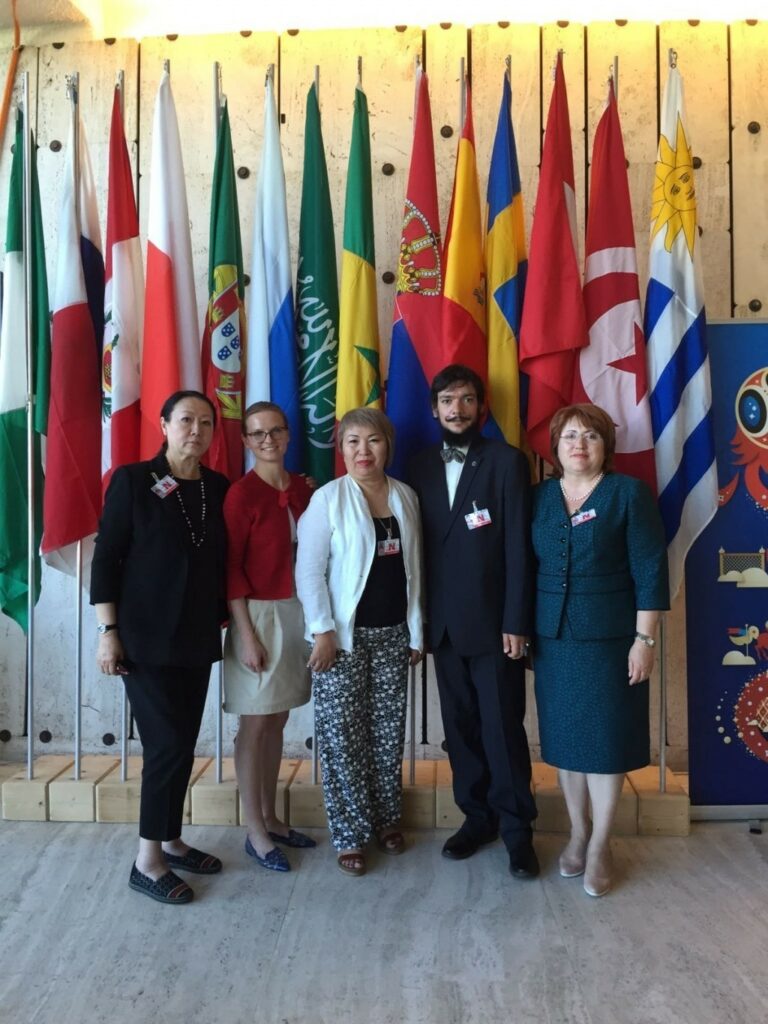 Between the 25 and 27 June, 2018, a delegation of lawyers, a judge and human rights defenders from Moldova, Russia, Kazakhstan, Italy, Belgium and Turkey, led by the Open Dialog Foundation, participated in the 38th session of the United Nations Human Rights Council in Geneva.

On this occasion, a side-event was organised by ODF and the Italian Federation for Human Rights, with the support of the Nonviolent Radical Party and the Transnational and Transparty, on the topic of the persecution of lawyers.

The speakers contributed their firsthand information explaining the hard conditions that lawyers in their countries have to face in order to exercise their profession.

Mrs Manole explained how she became the victim of political persecution which led to her dismissal as a judge. Mrs Manole was punished for standing strong against pressures exerted by oligarch Vladimir Plahotniuc to implement a politically motivated decision, when in 2016 she recognised as illegal the Electoral Commission’s decision to deny holding a referendum on amendments to the Constitution. “For two years I have been intimidated by prosecutors and courts, which carry out all types of strategies that they consider procedural, but in fact, by the way the cases have been unfolding for two years already, I declare to you that I am subject to endless and unfair procedures. One feels the obvious interference of a political factor, dissatisfied with the fact that I took a judicial decision to initiate a constitutional referendum. Thus, political forces oppose possible judicial decisions which can be taken by judges on governance issues of the state,” she said.

Mr Sotnikov, a Russian lawyer known for his work on the politically motivated cases of Ukrainian activists Aleksandr Kostenko, Evgeny Kurakin and Natalia Lutovinova and for his defence of Vitaliy Buntov, underlined how, in Russia, “lawyers and other persons attempting to provide independent legal assistance to accused persons in criminal cases are subject to all kinds of obstacles”. Sotnikov voiced his deep concern about the lack of independence of the Judiciary in his country, which undermines the ability of lawyers to practise freely, since judges can significantly influence and exert pressure on the work of a lawyer by referring them to the Bar association. Moreover, he mentioned some examples of lawyers who have been disqualified or removed from cases purely as a result of the judges’ complaints and he highlighted that in Russia there is a strong need to rehabilitate not only the right to be defended, but especially the right to defend, properly and independently.

Mrs Yerimbetova spoke on behalf of her daughter and son – respectively, Ms Botagoz Jardemalie, a lawyer and political refugee in Belgium, and Mr Iskander Yerimbetov, currently detained in Kazakhstan as a hostage under fabricated criminal charges. Mrs Yerimbetova talked about the mistreatment and torture to which her son has been subjected purely for the purpose of exerting pressure on her daughter, who has worked as a lawyer for Mr Mukhtar Ablyazov, a political opponent and considered as the number one enemy of the President of Kazakhstan. She stressed the fact that “only thanks to publicity, thanks to the intervention of international organizations and European politicians, the UN Special Rapporteur on Torture, was the torture stopped. However, despite our many complaints, there was no inquiry into the torture.” Moreover, she recounted her own experience of the recent wave of repression against protesters, showing how Kazakhstani authorities brutally react to peaceful civil actions: “On 10 May, my husband and I came out to a peaceful protest action in Kazakhstan. Our demands were simple: no to torture, freedom for political prisoners. People came out with these demands in all the large cities of Kazakhstan. The authorities brutally dispersed this protest. All of the participants were apprehended. My husband and I too. Because in Kazakhstan you do not have the right to say ‘No to torture!  Freedom for political prisoners!’”

Mrs Zhuaspayeva, a lawyer who has engaged in many politically sensitive cases in Kazakhstan since the tragic massacre of Zhanaozen in 2011, brought her own testimony about some of the most significant cases in Kazakhstan. Among others, she mentioned the case of poet and blogger Kenzhebek Abishev, whom she defends, who became one the first victims of the recent crackdown on supporters of the opposition movement Democratic Choice of Kazakhstan (DCK). In a time when many in Kazakhstan can be detained, arrested and prosecuted for simply posting or even just browsing DCK-linked material or web pages (which are considered extremist acts) her client Abishev and activist Almat Zhumagulov were the victims of a fabricated case, in which it is alleged that they were involved in a jihadist anti-government conspiracy. She pointed out that in her country harsh pressures are exerted not only on lawyers but also on clients, who are often asked to avoid cooperating with certain defenders.

Mr Stango, who during his career has worked extensively on Kazakhstan, shared his comments concerning his recent visits to the country, with Polish MP Mr Swiecicki in May, and with Italian Senator Mr Roberto Rampi in June, during which he had the opportunity to attempt to create a dialogue with representatives of local and national authorities and to meet and hear the testimonies of civil society activists and some political prisoners. Stango confirmed that the possibility to exert one’s rights to “freedom of expression and peaceful demonstration is very difficult, almost never allowed. […] When people are just showing up with some posters and demanding normal civil rights they can be stopped, harassed, arrested, jailed and sometimes prosecuted.” Mr Stango also commented on the decision to ban the Democratic Choice of Kazakhstan movement as an “extremist” organisation, stressing that the meaning of this adjective is not clear enough and can easily lead to arbitrary decisions of law enforcement agencies to consider and declare as extremist anyone who expresses some inconvenient ideas. On this account, he condemned the unnecessary brutal force deployed by the police during the peaceful protests occurred throughout the country on May 10, against tortures and political prosecutions, and June 23, for the reform. Referring to the conditions of detention of political prisoners, he said that “the principle of presumption of innocence is not fully respected and implemented in Kazakhstan […] when it comes to some accusations that have political implications”. In this regard, two examples are particularly meaningful: the case of Mr Mukhtar Dzhakishev, whom Mr Stango was not allowed to visit, a situation that raises doubts about the already serious health conditions of the prisoner; the case of Mr Yerimbetov, whom Mr Stango was able to meet and whose trial he observed during his last mission, but whose case, as the President of FIDU recalled, is being treated without complying to the law. Indeed, Mr Yerimbetov’s pre-trial detention has been unduly prolonged and several worrying and politically-biased irregularities in his unfair trial have been reported by him and by other international and national observers.

Mr Kasap spoke on behalf of the Arrested Lawyers Initiative, a group of Turkish lawyers forced to live in exile as a consequence of the government’s crackdown on human rights defenders and lawyers. In his speech he pointed out that, in Turkey, since after the failed coup attempt, “lawyers are targeted mostly on the basis of their clients’ profiles. The Justice Ministry can reach all lawyers’ clients information through the National Judiciary Network Project and pass this data to Intelligence Police, who in turn analyse such data and choose their targets. This crackdown has been going on relentlessly and it creates a chilling effect on the rights to a fair trial and access to legal counsel.” He also illustrated how lawyers are continuously targeted by criminal proceedings based on terrorist charges and expressed his deep worry about the lack of action by the national and local bar association to defend their colleagues.

Mr Henry, on behalf of the CCBE, illustrated the organisation’s long-standing position in defence of the defenders, mentioning some of the lawyers for whom they have intervened in the past months, such as Russian Mr Valentin Karelin and Ukrainian Ms Iryna Nozdrovska, and Kazakh Ms Botagoz Jardemalie. “All the names I have quoted are lawyer’s names. They are human rights defenders. They work alongside men and women from around the world, giving them the strength to stand upright,” he said, underlining the fundamental importance that the independence of lawyers plays in guaranteeing democracy and the rule of law.

During the mission, the delegates met with different representatives of national delegations to the UN, to bring to their attention the above-mentioned cases, as well as other urgent issues related to the shrinking space for civil society in these countries. The urgent case of opposition blogger Mr Muratbek Tungishbayev, whose extradition from Kyrgyzstan to Kazakhstan was decided and executed in these very days despite the many appeals, was also brought up during the meetings. Moreover, among the recommendations delivered by this mission was the promotion of the adoption of the Global Magnitsky Act as an effective tool allowing human rights abusers to be targeted individually by severe sanctions.

Additionally, on Monday 25, 2018, Mrs Kozlovska spoke about the cases of two women lawyers under politically motivated prosecution, Moldovan Ms Ana Ursachi and Kazakhstani Ms Botagoz Jardemalie, during the oral statements at the 14th meeting of the UN Working Group on Transnational Corporations and Special Rapporteur on Independence of Judges and Lawyers.