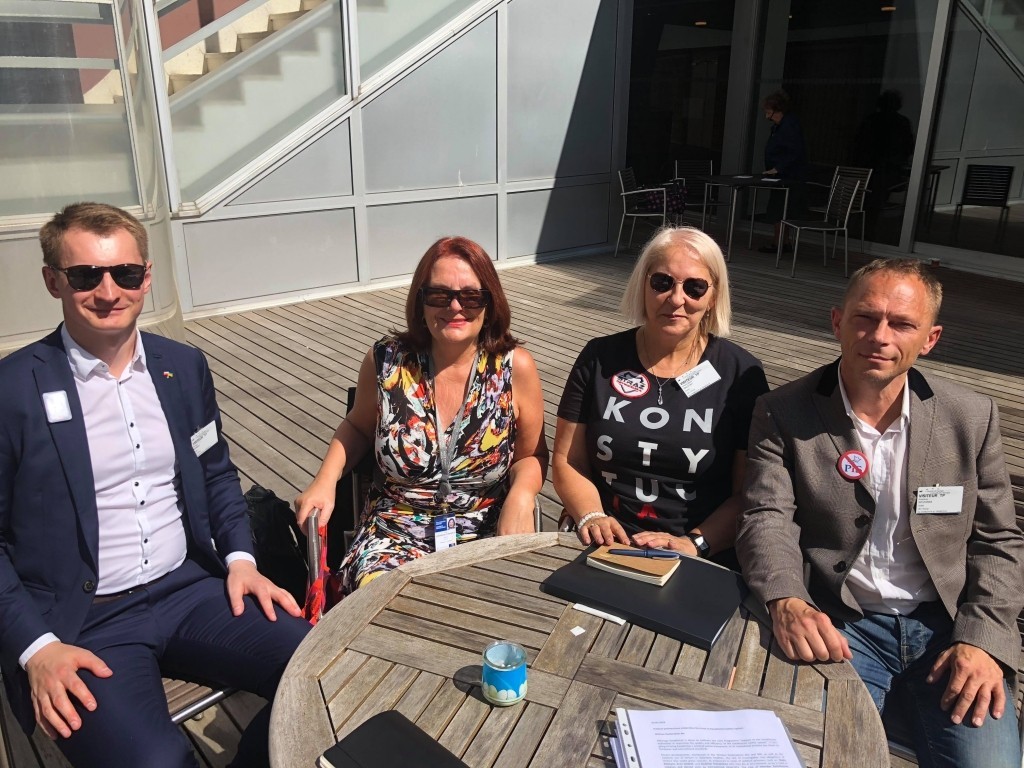 On the occasion of the summer session of the Parliamentary Assembly of the Council of Europe (PACE), a delegation of civil society activists from Poland and the Open Dialog Foundation (ODF) held a series of bilateral meetings with PACE Members and Permanent Representations to the Organisation.

During the session, representatives of the delegation voiced serious concerns over the dismantling of the judiciary and the breaching of the rule of law in Poland, as well as violations of the right to peaceful assembly and unlawful imprisonments in the Republic of Kazakhstan.

Poland’s unconstitutional rollback of democratic institutions and citizens’ rights have been addressed by Mr Bartosz Kramek, Head of the Foundation Board of ODF and Polish street activists Mr Arkadiusz Szczurek and Ms Julie Walecka. Since July 2017, they have been  actively involved in the organisation of anti-government protests against the crackdown on the independence of the judiciary and have taken part in numerous civil society organisations, such as OSA Committee (Citizens Solidarity in Action), Obywatele RP (Citizens of the Republic of Poland), Civil Guards, ODnowa (New Civil Democracy) and OKO Club (Open Citizens’ Club).

Confronting the issue of the assault on the judiciary, there were lawmakers from different national delegations, such as the UK, France, Iceland, Sweden, Netherlands and Germany, and Permanent Representations. In particular, member states of the EU were invited to act in defense of the rule of law in Poland, to halt the move by the PiS government to subjugate the courts to its executive control and to prevent the enactment of a new law on the Polish Supreme Court, which would dismiss around 40% of the judges and appoint new ones.

The delegates stressed the need to back the infringement procedure that the European Commission launched against the law relating to Poland’s Supreme Court before the EU Court of Justice, and the need for the Council to hold a vote on the Commission’s proposal to invoke the Article 7 procedure against Warsaw. The law is expected to enter into force in early July with irreversible consequences for the independence of the judiciary and the rise of illiberal democracies within the European Union. Therefore, the ODF urged parliamentarians of the EU member states to maintain a common front with the Council and the European Commission, in order to prevent a swing towards authoritarianism at the heart of the EU.

Mr Kramek, Ms Walecka and Mr Szczurek gave concrete examples of how the Polish authorities are using more and more forms of unconstitutional pressure on civil society, non-governmental organisations (such as the Open Dialog Foundation and Free Citizens of the Republic of Poland) and representatives of the judiciary. They explained that such pressures is taking the form of appropriating independent courts for political purposes, persecution of civic circles for anti-government activities and silencing media that publicising information inconvenient to the ruling elite.

Since the beginning of major protests in Poland, the Foundation has been the promoter of a motion for a resolution entitled “Civil liberties in Poland, Ukraine and the Republic of Moldova must be preserved”, condemning the shrinking space for civil society in the three aforementioned countries. Hopefully, the motion will be considered within the framework of a report under preparation by the PACE Monitoring Committee “The functioning of democratic institutions in Poland”.

Ms Paola Gaffurini, Advocacy Officer for the ODF, informed PACE Members and European diplomats in regards to the most pressing cases of human rights abuses in the Republic of Kazakhstan. On this occasion, the Foundation commented on the results of the Joint Programme “Support to the Kazakhstani authorities in improving the quality and efficiency of the Kazakhstani justice system”, highlighting the worrying deficiencies in Kazakhstan’s criminal justice.

In particularly, ODF brought to the attention of the Council of Europe the systemic use of torture in detention facilities and the impunity of human rights abusers. Individual cases of political prisoners were also raised, such as those of Maks Bokayev, Aron Atabek, Mukhtar Dzhakishev, Iskander Yerimbetov and the recently extradited blogger Muratbek Tungishbayev.

Concerns were voiced over ongoing violation of the right to peaceful assembly and the episodes of 10 May and 23 June that resulted in the persecution of more than 140 protesters demanding free education, the release of political prisoners and cessation of torture. In response to the appeal, 22 PACE members signed a written declaration “Political prosecutions undermine the trust in the Kazakhstani justice system”. A detailed description could be found here.