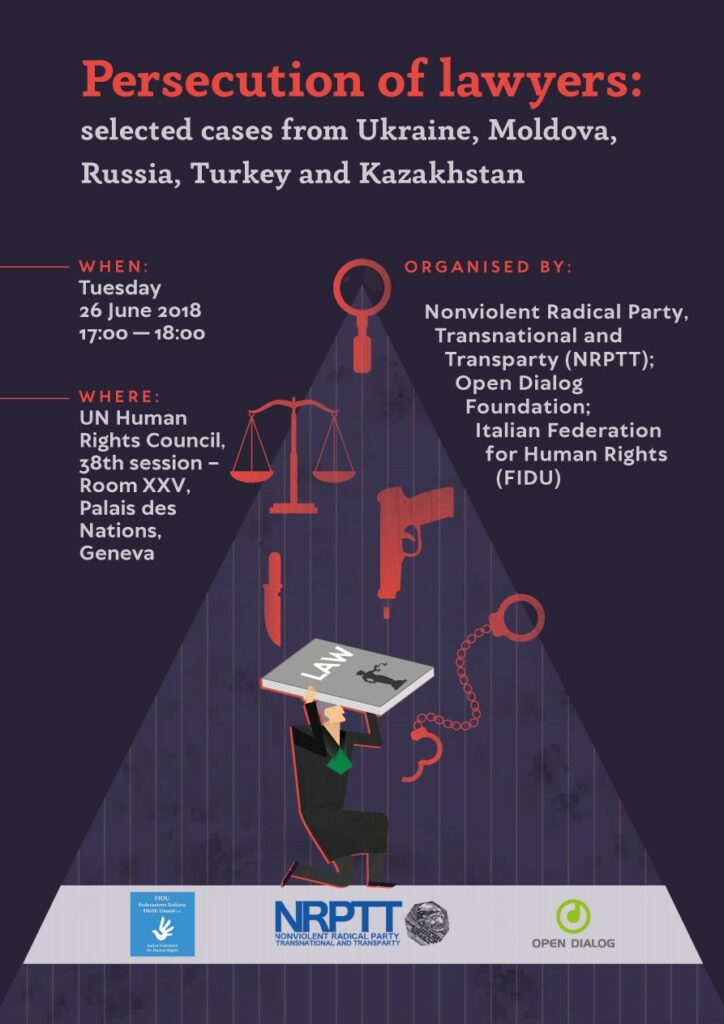 Invitation to a press conference: “In defense of civil liberties. Testimonies from Russia, Moldova and Kazakhstan”

On Thursday 19 July 2018, the Open Dialog Foundation (ODF) and the Italian Federation for Human Rights (FIDU), together with the Italian Senator Mr Roberto Rampi, will host a press conference entitled “In defense of civil liberties. Testimonies from Russia, Moldova and Kazakhstan”. The event will take place at the premises of the Italian Senate, room “Caduti di Nassirya”, from 14.30 to 15.30 and will see the participation of human rights activists and lawmakers.

Senator Rampi and Mr Stango, President of FIDU, will present their recommendations on the protection of the fundamental freedoms of peaceful demonstrators and political prisoners in Kazakhstan, after having visited the country between 16 and 21 June 2018. The meeting will be an opportunity to listen to the testimonies gathered by Senator Rampi and Mr Stango following several meetings with representatives of civil society, government authorities and political detainees. Another pressing theme of the debate will be the persecution of lawyers involved in the defense of politically motivated cases and the restrictive measures undertaken by the Kazakh government to reduce the independent space of the legal profession.

In Moldova, a decision by a Supreme Court to invalidate the results of a mayoral election in Chisinau that was won by the opposition candidate Andrei Năstase sparked harsh criticisms from the European Union and several ambassadors to the country. In recent weeks, protests have inflamed the capital with the request to restore the rule of law and the legitimate vote of Moldovan citizens. Also under attack are those judges, lawyers and pro-reform activists critical of the ruling elite and oligarchic interests.

Similarly, in Russia, lawyers who choose to fight for the rights of political prisoners are subjected to constant pressure, administrative sanctions and smear campaigns with the aim of intimidating and censoring dissenting voices. As raised by numerous international organisations and NGOs, the situation of Ukrainian political prisoners being unjustly held in the Russian Federation and illegally occupied Crimea is particularly serious.

The event will be moderated and presided over by Senator Rampi. Among the speakers who will present their testimonies, there will be:

Lyudmyla Kozlovska: President of the Open Dialog Foundation, a human rights organisation active in the defense of political prisoners, lawyers and judges persecuted on political grounds in the region of the former USSR;

Igor Kotelyanets: brother of Evgeny Panov, Ukrainian political prisoner detained in the town of Simferopol in the Crimean Peninsula, territory illegally occupied by the Russian Federation.