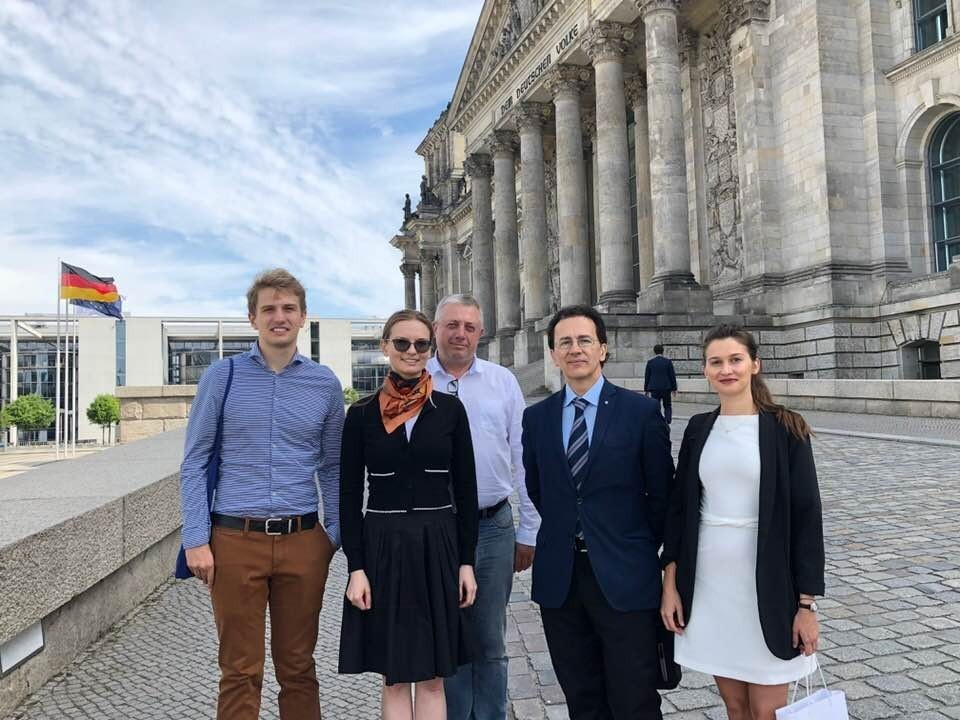 On the occasion of the Annual Session of the OSCE Parliamentary Assembly held in Berlin between 7 and 11 July 2018, a delegation of human rights and civil activists led by ODF presented their reports and made their appeals to members of different national delegations. The delegation was composed of Mr Alexei Tulbure from Moldova, Mr Antonio Stango representing the Italian Federation for Human Rights and Mrs Lyudmyla Kozlovska representing the Open Dialog Foundation.

On a three-day mission from 9 to 11 July, they met with different representatives of national delegations from the OSCE Parliamentary Assembly, as well as with German representatives and local civil society organisations.

Mr Tulbure, former Permanent Representative of Moldova to the UN and Council of Europe and Head of the delegation to the OSCE PA, and currently a leader of civil anti-corruption activism in the country, expressed his concerns about the latest developments in the country. In particular, he mentioned as a major example the recent nullification of the mayoral election in Chisinau, which led to a harsh reaction by the EU and the freezing of macro-financial assistance to the country. Tulbure provided an overview of the most pressing issues concerning the state of democracy in Moldova: he underlined how of the Plahotniuc-led Democratic Party handled its low popularity by passing a controversial electoral reform, characterised by gerrymandering (in spite of the recommendations of the Venice Commission) which will be used in the forthcoming elections next fall. He warned interlocutors about the existence of a de facto captured-state and the fundamental contradictions in the apparent pro-European stance of the Democratic Party, made self-evident in the Chisinau election by the way the political force showed it is willing to treat electoral results for the sake of maintaining power. While warning that general corruption and buying of votes, rather than formal irregularities, will represent the main challenge in the holding of elections, Mr Tulbure called on the OSCE to be the guardian of democracy in Moldova and make all efforts necessary to ensure that the next elections be held according to international standards.

Mrs Kozlovska drew attention to individual cases of political persecution in the country that have been reported by ODF, including the case of judge Mrs Domnica Manole. Mrs Manole was deprived of her role for daring to make an independent decision on the holding of a referendum rather than bowing to political pressures, her case thus representing an example of the tight grip politics holds on the judiciary in Moldova.

On Kazakhstan, Mrs Kozlovska presented the worsening situation of civil freedoms and human rights in her country. Held by an authoritarian leader for almost three decades, the country is committed to international standards with regards to the protection of fundamental freedoms, civil and political rights, as well as human rights, but does not abide by its obligations. Lately, the trend towards political repression has been growing, especially in the wake of hard-line oppression of the peaceful political opposition movement Democratic Choice of Kazakhstan (DCK), which was banned as extremist last March. Mrs Kozlovska explained how peaceful protesters are regularly harassed, detained and arrested on the streets purely for calling for an end to politically motivated prosecutions, ill-treatment and torture in detention, as was the case in the May 10–11 protests around the country, on the occasion of the visit of European Parliament’s delegation for the PCC. Similarly, she recalled the events of last June 23, when again law enforcement cracked down violently on citizens calling for the right to free education, and explained that any minor form of support or simple approval of the DCK movement and its activities can be punished with long prison terms. The case of political prisoner Mr Mukhtar Dzhakishev was also presented. Due to mistreatment and extremely poor health Mr Dzhakishev has been declared disabled and is still being kept from receiving any visits by external delegations. Mrs Kozlovska called on political representatives to ask for amnesty for Mr Dzhakishev. She talked about the case of Mr Iskander Yerimbetov, who is being kept as a hostage by the regime, has been severely mistreated and is currently being denied the right to a fair trial, all in retaliation for the activity of his sister Botagoz Jardemalie, a lawyer who was granted political asylum by Belgium and who has been a legal consultant to oppositionist Mukhtar Ablyazov.

Mrs Kozlovska drew attention to the case of Botagoz Jardemalie as an example of an endangered lawyer, which is a warning on the general situation of the region’s lawyers and judges, whose independence and ability to practice and defend must be protected.

Mr Stango, who recently concluded two human rights monitoring missions in Kazakhstan (one in April with Mr Martin Swiecicki and another in June with Italian Senator Roberto Rampi), presented the findings of his missions and he too warned about the worrisome shrinking of civil liberties such as the freedom of expression, assembly and association in the country. He underlined the importance of establishing a positive and constructive dialogue with authorities in order to make sure that, in exchange for the full implementation of the economic agreements in place between European countries and Kazakhstan in the framework of the EPCA, they be willing to fully comply with their commitments in terms of rule of law, human rights and democratic standards. Mr Stango expressed his concern over the trial of Mr Yerimbetov, which is flawed and does not comply with the standards of a fair and independent trial, and reiterated that during his visit to political prisoners in the country, he was not allowed to visit Mr Dzhakishev. Concerning the issue of political repression, Mr Stango confirmed that the freedom of association is non-existent for political purposes that are potentially critical to – or perceived as such by – the ruling authorities. Similarly, peaceful gatherings and demonstrations are treated as a threat and brutally repressed.

Moreover, Mrs Kozlovska presented the new complaints received by the Foundation from individuals who have been harassed by the authorities, illegally detained and subjected to criminal proceedings in the aftermath of the latest protests organised by the DCK. More than 150 cases have been recorded thus far.

The case of extradited Kazakhstani blogger Muratbek Tungishbayev was also brought up during the meetings, underlying the importance of monitoring his case in order to make sure that Tungishbayev does not become another victim of political persecution, and that he is provided fair treatment and a fair trial.

The delegation called on the OSCE PA to monitor individual cases and protect human rights defenders and lawyers to ensure the independence of the judiciary in Moldova and Kazakhstan, and to seriously consider the adoption of the Global Magnitsky Act at the national level to stop the impunity of those responsible for human rights abuses.

At the end of the Annual Session, the OSCE PA successfully adopted the Berlin declaration. The Foundation welcomes the inclusion of the issue of the protection of lawyers and human rights defenders in it, as well as the reform of INTERPOL and the commitment to eradicate torture and inhumane treatment – all subjects that the Foundation has followed closely and advocated for in recent years.