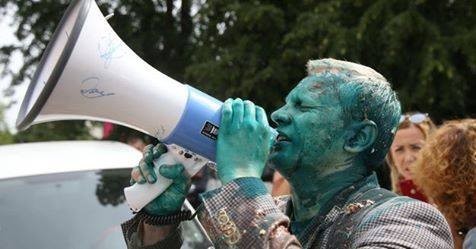 Ukrainian civil society members published an open letter, addressing the Ukrainian authorities and law enforcement agencies, calling to end the attacks on the Anti–Corruption Action Center and its head Vitaliy Shabunin. Open Dialog Foundation is joining the appeals to end the impunity,  to abolish discriminatory legislation and to cease the persecution of anti-corruption activists on trumped-up charges.

Office of the United Nations High Commissioner for Human Rights

On July 17, 2018, Vitaliy Shabunin, the Head of the Board of the Anti-Corruption Action Center (ANTAC), was attacked once again. The attack took place during a rally for dismissal of anti-corruption prosecutor Nazar Kholodnytsky near the Specialized Anti-Corruption Prosecutor’s Office (SAPO). The activists demanded to dismiss the official because the SAPO had closed the so-called “case of backpacks”, involving Oleksandr Avakov, the son of Ukrainian interior minister Arsen Avakov, and ex-deputy interior minister Serhiy Chebotar.

During the rally, the young men wearing military uniform attacked Vitaliy Shabunin and splashed him with brilliant green paint, which resulted in chemical eye burn. The police officers, who were present at the rally, did not take the necessary measures to prevent the attack and to ensure the safety of the participants in the peaceful assembly.

As a reminder, it is not the first case of persecution of Vitaly Shabunin and the Anti-Corruption Action Center, which he leads. Over the recent few years, the Ukrainian authorities, primarily the Prosecutor General’s Office and the Security Service of Ukraine, have been holding a large-scale campaign against activist Shabunin, using various forms and methods of pressure – spying, wiretapping, discrediting campaigns and trumped-up criminal cases.

In particular, the ACAC was the defendant in a criminal case initiated by investigators of the Prosecutor General’s Office over alleged embezzlement of funds allocated by the governments of the U.S. and the European countries for the prosecutor’s office reforms. Within the framework of this case, on March 22, 2016, the Pechersk District Court in Kyiv granted the Prosecutor General’s Office the right to seize the property and documents of the ACAC. Later, the case was closed, but financial information and personal data of the activists obtained during the investigation were subsequently used in the discrediting campaign.

On April 9, 2017, the house, where Vitaliy Shabunin lives, was picketed to exert pressure and discredit him. The Security Service of Ukraine was involved in the organization of the picket.

On May 11, 2017, employee of the ACAC Oleksandra Ustinova said that she and her house were spied on by the persons, who shot a film to discredit her at the order of the Security Service of Ukraine.

On June 7, 2017, six people summoned Vitaliy Shabunin to a military registration and enlistment office, although the activist had been recognized as unfit for military service for health reasons back in 2000. The next day, when Shabunin came to the office, he was attacked and hit by tear gas cartridge.

On June 9, 2017, the investigative directorate of the Fiscal Service of Kyiv instituted the criminal proceedings against the leaders of the NGO “Anti-Corruption Action Center” over alleged tax evasion on the request of Ukrainian lawmaker Pavlo Pynzenyk.

Another criminal case was instituted against Vitaliy Shabunin himself as a result of the incident that had taken place on June 8 near the military registration and enlistment office. The activist was served with charges of “threats or violence against a journalist“. More than thirty human rights organizations said there had been signs of political bias in the actions of law-enforcers who investigated the case.

Later, the Boryspil District Prosecutor’s Office opened a criminal case against member of the board of the ACAC Oleksandra Ustinova on charges of interfering with journalistic activities.

In addition, anti-corruption activists have become the target of a number of discrediting campaigns that have been taking place over the last few years. The mudslinging campaign against the activists (particularly, against ACAC members Vitaliy Shabunin, Oleksandra Ustinova and others) was launched in the media, websites of online media outlets of dubious reputation and in social media. Foreign lobbying companies were also hired to discredit the activists.

The Ukrainian authorities have still not abolished the infamous legislation on electronic declaration for anti-corruption activists, which was criticized by the Venice Commission. It is also a matter of concern.

The attack on Vitaliy Shabunin and a series of attacks on other activists, who resist corruption and organized crime, which in most cases remain unpunished, discrediting campaigns against activists in the media and social networks, trumped-up and politically motivated criminal cases, and the deterioration of the legislative framework in the field of freedom of association in Ukraine is an extremely disturbing trend. This testifies to the systematic and multidimensional crackdown of the authorities on the civil society that consistently and uncompromisingly resists corruption. In November 2017, about fifty NGOs from Europe and the United States made a statement in support of protection of the anti-corruption activists in Ukraine.

We once again emphasize that the efforts of the activists, who resist corruption and organized crime, are critically important for the implementation of democratic changes in Ukraine, for reforms on path of the European integration, in particular, for the launch of the new anti-corruption bodies, the introduction of the electronic declaration of property of Ukrainian public servants as well as effective investigation into corruption crimes and bringing perpetrators to justice.

In this regard, we call on the law enforcement agencies:

–       to ensure a quick, complete and impartial investigation into the attack on head of the board of the Anti–Corruption Action Center Vitaliy Shabunin, to bring the perpetrators to justice, to take all the necessary measures to prevent new attacks;

–       to immediately stop the politically motivated prosecution of Vitaly Shabunin, Oleksandra Ustinova and the Anti–Corruption Action Center and refrain from further prosecution;

–       to ensure the safety of members of peaceful assemblies;

–       to examine the constitutional motions over unconstitutionality of electronic declarations for public activists, submitted by the Ukrainian Parliament Commissioner for Human Rights as well as a group of lawmakers;

–       to abolish the legal norms on e-declarations for anti-corruption activists; to refrain from adopting new legislative acts that could toughen the activity of NGOs;

–       to get the probe into the attack on Vitaliy Shabunin under personal control; to create a system of rapid response to the cases of persecution of civic activists at the Office of the Ukrainian Parliament Commissioner for Human Rights;

–       to condemn openly the cases of physical violence and discrediting campaigns against anti-corruption activists and NGOs;

–       to exert pressure on Ukrainian authorities in order to improve the overall situation regarding the activities of anti-corruption activists and NGOs in Ukraine, in particular, regarding the effective investigation into attacks and the avoidance of impunity, the abolition of discriminatory legislation and the cessation of persecution of anti-corruption activists on trumped-up charges.