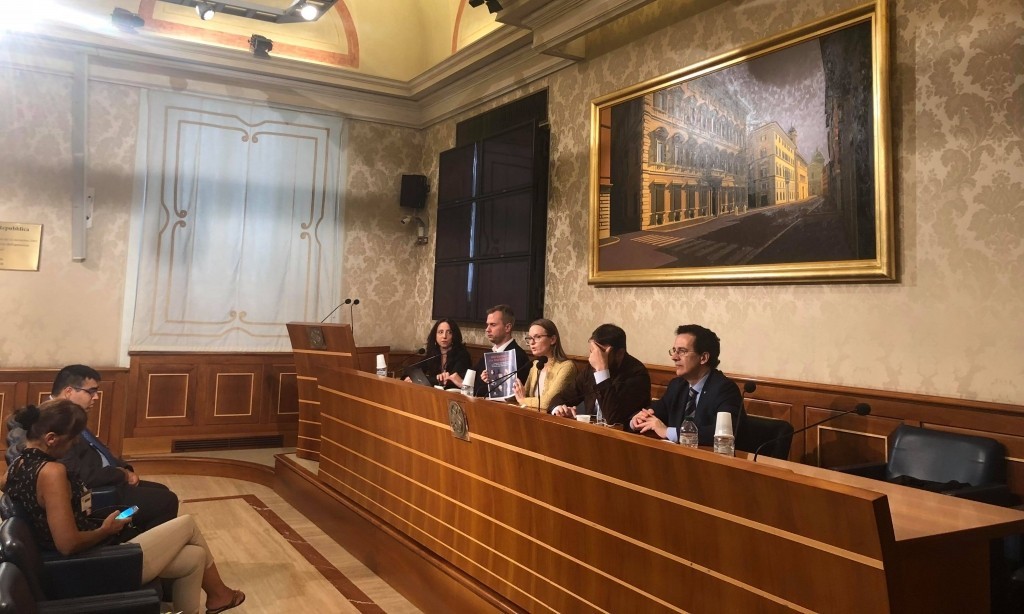 Between Wednesday 18 and Thursday 19 July, 2018 in Rome a delegation of human rights defenders of the Open Dialog Foundation (ODF) and the Italian Federation for Human Rights (FIDU) took part in a series of meetings and seminars with Italian lawmakers, journalists and members of Italian National Forensics Council (CNF). Among them, Senators Roberto Rampi, Alessandro Alfieri, Mr. Gianni Pittella (Democratic Party) and Mr. Riccardo Magi (+Europa).

On Thursday 19 July, 2018, Italian Senator Rampi, together with ODF and FIDU, hosted a press conference at the premises of the Italian Senate entitled “In defense of civil liberties. Testimonies from Russia, Moldova and Kazakhstan”.

Mr. Rampi, who presided over the event, opened the conference on the human rights mission he conducted on behalf of the Italian Senate to Kazakhstan with Mr. Stango. The Senator reiterated how the quality of life of every human being in the world is central and how countries that do not respect the rule of law are dangerous to other countries, including in the light of today’s trend towards progressively restricting civil liberties and the rule of law. He continued his speech by saying he was particularly involved in the mission and struck by the stories he had heard in the three cities of the country he had visited. There, he met with hundreds of activists and from those meetings he acknowledged that in Kazakhstan, a person who peacefully expresses his rights, not only political or civil rights but also social, can be detained and searched by the police.

Senator Rampi explained that in the country there are widespread violations of individual freedoms and even more striking cases, such as those of: M. Dzhakishev, I. Yerimbetov, K. Abishev, A. Zhumagulov and A. Nurzhaubay. In Kazakhstan, the senator visited two political prisoners, K. Abishev and A. Zhumagulov, who were unlawfully convicted on serious and totally fabricated charges. He pointed out that he was not allowed to meet with the detainee I. Yerimbetov, who is the brother of human rights defender and lawyer Botagoz Jardemalie and a political prisoner who has been subjected to torture and beatings by other inmates upon the direct orders of officers of the National Security Committee of the Republic of Kazakhstan. However, Mr. Stango was able to observe Yerimbetov’s trial. Senator Rampi shared with concern the observation of Mr. Stango that the rule of law had been superseded by a discretionary assessment by the judge. Moreover, Senator Rampi recalled that it was not possible to visit M. Dzhakishev (an even more serious case), explaining that the Kazakhstani authorities had prevented the visit on the grounds that the detainee is aware of state secrets and cannot therefore receive foreign delegations.

During his presentation, the Italian lawmaker called upon the Kazakhstani authorities to respect its international obligations and urged Italy’s Parliament to ratify the Enhanced Partnership and Cooperation Agreement (EPCA) as long Kazakhstan fully respects human rights conditions.

The floor passed to Mr. Antonio Stango, who participated in several human rights missions to Kazakhstan that were initiated by national parliaments of the EU, and who stressed the need for full implementation of the EPCA and international treaties signed and ratified by Kazakhstan. During the mission on behalf of the Italian Senate, Mr. Stango and Senator Rapmi met with the Deputy Prosecutor General and Deputy Minister of the Interior, who pointed out that Kazakhstan had signed the International Convention against Torture and its Optional Protocol, which sets up a system of monitoring committees in the different regions of the country, supervised by an independent national body whose purpose is to monitor the conditions of detainees but which has many limits. Moreover, he recalled that Kazakhstan has ratified the International Covenant on Civil and Political Rights and highlighted the fact that according to its article 7, the State has the duty to conduct detailed investigations with respect to cases of torture.

At the event, Mr. Stango reported numerous concerns, starting from the fact that the investigations into allegations of torture against the detainee I. Yerimbetov have been closed and the inmates responsible for beating him now have access to his cell. He said that such actions represent a clear act of intimidation towards the detainee, who is awaiting for his sentence to be determined and it is unacceptable that Kazakhstan has not placed cameras in the detention facility. He also added that during the trial, representatives of the prosecution were wearing uniforms and that the judge recognised that the period of pre-trial detention of I. Yerimbetov exceeded the maximum terms permitted by law in regards to the first charge, but when it came to the second charge, he decided to arbitrary apply detention measures convenient to the authorities.

Mr. Stango also presented the situation of civil liberties in Kazakhstan, in particular the persecution of activists, bloggers and peaceful demonstrators linked to the recently-banned opposition movement “Democratic Choice of Kazakhstan” (DCK). Such repressive actions are perpetrated by the Kazakhstani authorities in the name of the fight against extremist organisations. He underlined how the definition of an “extremist organisation” is absent in the Kazakhstani legal order and therefore sensitive to manipulations and interpretations by law enforcement agencies and judicial authorities.

Mr. Igor Kotelianets told the audience the dramatic events that led to the incarceration and torture of his brother and activist, Mr. Evgeny Panov, by the Russian authorities. As explained by Mr. Kotelianets, Mr. Panov is one of 70 Ukrainian citizens imprisoned on the territory of the Russian Federation or the Crimean Peninsula since the beginning of the Russian–Ukrainian conflict. Among these detainees there are people who have been recognised as political prisoners by various international organisations, such as Freedom House, Center for Civil Liberties, Amnesty International, Memorial and many others. Among them, there are three prisoners, namely Oleg Sentsov, Volodyyr Balukh, Oleksandr Shumkov, who have been on hunger strike for several months already to demand the release of all Ukrainian hostages.

He also stressed the importance of the role of detainees’ lawyers and reiterated that legal assistance is an essential bridge of communication for a family to ascertain the conditions of a prisoner. Furthermore, he said that lawyers play a crucial role in gathering the evidence required to file appeals at the various international courts.

Finally, he called upon Italian lawmakers to support any initiatives in defence of the so-called “hostages of the Kremlin”, to protect relatives in the detention facilities by publicising the abuses committed by Russian officials and to adopt the “Global Magnitsky Act” at the national level.

Senator Rampi added that an open letter will be initiated on the occasion of Mr. Putin’s invitation to Italian Prime Minister Mr. Giuseppe Conte to visit Russia, underlying the need to speak out on human rights issues.

During the seminar, Ms. Lyudmyla Kozlovska pointed out that currently in Kazakhstan there are more than 150 cases of politically motivated prosecutions against peaceful demonstrators and underlined that the persecution of M. Tungishbayev, Z. Akhmetova, A. Dzhumayev and A. Nurzhaubay continue.

She also presented the results of the latest report published by the Foundation containing more than 94 cases of lawyers involved in the defence of political prisoners and political cases who have been subjected to threats, administrative sanctions, pressure and defamatory campaigns. In particular, Ms. Kozlovska denounced the obstacles faced by legal representatives in countries such as Russia, Kazakhstan, Turkey, Moldova or in the territory of occupied Crimea simply because they legitimately defended the interests of their clients.

On this particular occasion, she focused her intervention on the situation in Moldova, where the Foundation reported 21 cases of politically motivated prosecutions against those who had criticised Vladimir Plahotniuc, an influential oligarch who has captured all the political and judicial spheres in the country. Besides the urgency for the EU to strengthen the mechanisms of macro-financial conditionality to Moldova in the framework of the Association Agreement, Ms. Kozlovska emphasised the need for the Italian Parliament to adopt the “Global Magnitsky Act”, an effective deterrent and a sanctioning tool against officers responsible for violations of human rights and corruption scandals. The act takes its name from the Russian lawyer Sergei Magnitsky, who died in prison for investigating an alleged tax fraud linked to the Kremlin. She announced that twenty Moldovan NGOs had already signed a petition to call for the adoption of such a law by national parliaments; meanwhile, Senator Rampi said he was ready to host an event on the matter at the Italian Senate, during the autumn season.

At the event, questions from the audience, particularly from a correspondent of Radio Svoboda and representatives of the Embassy of Ukraine to Italy, raised concerns over nine Italian MEPs responsible for having voted against a resolution of the EP calling for the release of Ukrainian political prisoner and film director, Mr. Oleg Sentsov.

The relevance of the issue prompted the intervention of lawyers present among the public, such as Mr. Carlo Forte, on the initiatives planned at international level on the defence of the defenders, and Mr. Roberto Giovene di Girasole, who recalled the activities and the role of the International Observatory of Attorneys in Danger (OIAD) in the protection of the legal profession. Mr. Caia concluded the debate by underlining the importance of publicly raising the issue of safeguarding lawyers in danger.