Search
The Open Dialogue FoundationExternal SourcesMarcin Święcicki, Member of the Polish Sejm, issued a parliamentary question concerning the removal of Lyudmyla Kozlovska from the territory of the EU to the Polish Prime Minister

“I have filed a parliamentary question with the Prime Minister regarding the prohibition of entry into the Schengen Area issued in the case of Lyudmyla Kozlovska ” – this is what Marcin Święcicki Member of the Polish Sejm posted on his Facebook profile on 22 August, 2018, where he also shared the content of such an inquiry. Among others, Święcicki calls for an explanation why the Polish government has imposed such sanctions upon ODF President not giving her any chance to defend herself.

The reason why Lyudmyla Kozlovska’s name was entered into SIS was a negative opinion issued by the Counterintelligence Division of the Internal Security Agency concerning the sources of financing of the Open Dialog Foundation, Apart from enumerating the Foundation’s achievements in the area of defending human rights in post-Soviet countries, Marcin Święcicki also argues that an assault on the ODF is a success of Russian and Kazakhstani authorities, because the Foundation has been taking efforts in order to focus the UE’s attention upon political persecution in those countries.

In consideration of the above, I would like to ask you, Mr Prime Minister, to respond to the following questions:

1. Are prohibitions of entry into the Schengen area also issued in the case of executive members of any other organisations if the Polish authorities happen to have doubts regarding their finances?

2. Has the Internal Security Agency ever requested that the ODF explain the doubts they might have as regards its financing sources?

3. Does the use of such extraordinary measures against someone who has been actively involved in defending human rights in the post-Soviet region go well with Poland’s reputation as a country famous for its rich history of civil strikes against the authoritarian regime?

4. Why has someone who has done so much to defend human rights in the post-Soviet region been subjected to such sanctions without being notified about their actual rationale, particularly since this makes it impossible to take steps to defend oneself, file appeals or request clarification? – asked Święcicki. 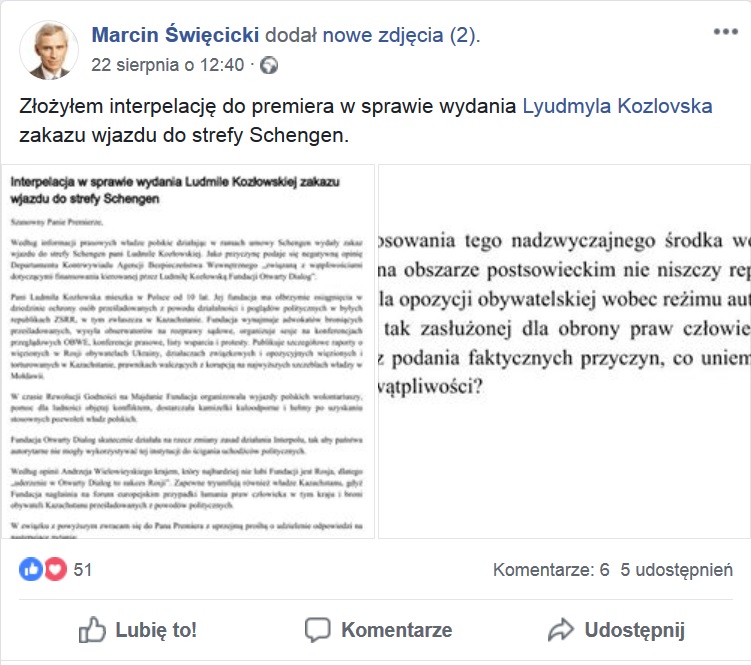