25 September 2012 | Author: Editor service
Table of contents:
Testimonies of defendants A. Aminov and S. SapargaliTestimonies of witnessesPremature announcement of guiltThe comments of the observers and the Kazakh public figures

The trial in the case of the oppositionists enters its final stage – closing arguments.  The state prosecution has prematurely announced Vladimir Kozlov guilty of committing all the criminal offences under the stated articles and asked the court to sentence the opposition leader to 9 years’ imprisonment with confiscation of property.

Testimonies of defendants A. Aminov and S. Sapargali

On the 13th of September, 2012, at the trial of the oppositionists, one of the defendants, the leader of the strike movement Akzhanat Aminov, was questioned. During the cross-examination, he read his testimony from a sheet of paper and admitted his guilt in the organisation of the beginning of the strike of the Zhanaozen oil workers.

It should be noted that the evidence of Akzhanat Aminov directly reproduced the official version of the state prosecution, which was announced at the trial during the closing arguments on the 24th of September, 2012:

–  A. Aminov established an organised criminal group of oil workers and he carried out strikes and hunger strikes.  When asked by lawyer AleKsey Plugov, whether A. Aminov can remember who passed Kozlov’s instructions, and what exactly was passed by this person, whether these instructions were fulfilled, and how they were fulfilled, the defendant replied, “I received no instructions from Kozlov…” When asked by attorney Ardak Batiyeva, what the organised criminal group was into and what roles the members of this group had, A. Aminov replied: “I can not specifically say … As I have already said, they were told to give interviews, to hand out newspapers and organise meetings”;

–  After that, he “came into contact with the organised criminal group of Ablyazov and Kozlov”, and the contact was made through activist of the “Alga!” party Ayzhangul Amirova (an excerpt from the testimony of A. Aminov): “A member of the “Alga!” party, Ayzhangul Amirova, was also a member of the staff. She established contact with members of the staff, as instructed by Kozlov. She conveyed all our conversations to Kozlov. Amirova distributed the newspapers: “Golos Respubliki” (“The Voice of the Republic”) and the ‘Pravda Kazakhstana” (The truth of Kazakhstan’) in the square. Also, Amirov distributed tents to keep the workers in the square”;

–  After Kozlov’s arrival to Zhanaozen, Aminov “completed the establishment of the criminal group” (an excerpt from the testimony of A. Aminov):”I have heard that in the spring Kozlov came to Zhanaozen and met with oil workers. I knew that he was from the “Alga!” and they were well-connected with the “K-plus”, “Respublika”, “Vzglyad”. So I decided to ally with the “Alga” party, Kozlov and these media. After that, all oil workers started to watch the “K-plus”, read the “Respublika”, the “Pravda Kazakhstana”, they have adopted radical views against the government”.

As a result, Akzhanat Aminov has assumed the role of a bridge between the striking oil workers and the organised criminal group of Ablyazov and Kozlov: “My goal was to set the workers against the employer, to foment the protest and instill anger in the workers, and, subsequently, to compel them to strike. My actions and instructions played a big role in the organisation of the strike in May 2011 … I consider myself guilty as of May, 2011.”

The leader of the “Khalyk Maidany” public movement, Serik Sapargali pleaded partial guilt, saying that his words and actions could have served as one of the causes of the December tragedy in Zhanaozen: “I went to Zhanaozen to help people. Only at the end of November, 2011, did I realise that the actions and demands of the strikers went beyond the legal field. I am truly sorry and I admit my guilt in the part that my words and actions could have led to the events of December 2011 in Zhanaozen”. Obviously, the defence of Serik Sapargali relies on the possibility of his exemption from criminal responsibility under Article 65 of the CC (“due to his active repentance”). Earlier, on the basis of this article, other persons involved in the case “of ‘inciting social hatred” – Bolat Atabayev, Zhanbolat Mamay and Anzhangul Amirova have been released. 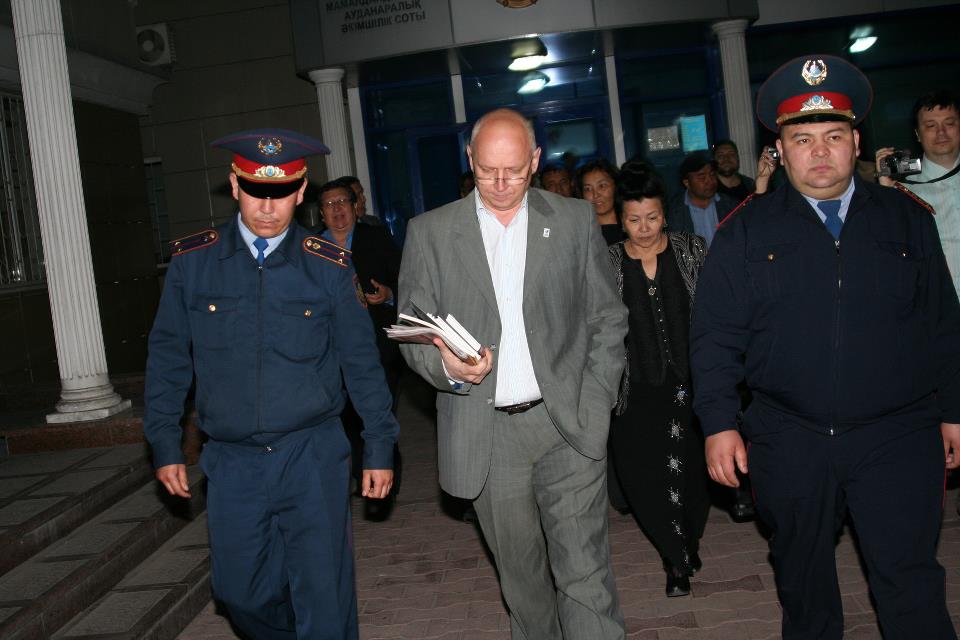 witnessess’ testimonies. The Open Dialog Foundation would like to draw the attention of the international community to the fact of fundamental changes in the testimonies of people who are participating in the case, which resulted in their transfer to the category of witnesses. In particular, some of the witnesses (e.g. Estay Karashaev) in their testimonies contradicted what they had said before. Others (Kikbayya Yeshmanov) retracted their earlier statements. But some witnesses (B. Nurymbetov and A. Aytkulov) built their testimony not on facts but on their assessment, immediately putting the blame on the defendants.

Recent events in the Mangistau Court also give reason to assume the possible fabrication of witnesses’ testimonies by the prosecution.

21.09.2012 Vladimir Kozlov and the attorneys demanded the exclusion from the case file of the testimonies of the witnesses Chalaev and Karashayev who failed to appear in court. When prosecutors read out the testimony, both texts proved to be almost identical in the sections where witnesses were talking about Vladimir Kozlov’s activity. The ddefendant suggested that prosecutors had fabricated evidence. Still,  the judge Berdybek Myrzabekov denied the motion.

On the 19th of September, 2012, in the court, the testimony of Roza Tuletayeva, the activist of the Zhanaozen movement, whose sentence was reduced from 7 years’ imprisonment to 5 years in exchange for testifying against the oppposition leaders. In the text, read out by the prosecutors, Tuletayeva is saying that Sapargali was calling on the oil workers to overthrow the government.  On the 21st of September, 2012, Serik Sapargali asked the judge to exclude this testimony from the case file, because it is not true, as Tuletayeva met Sapargali in the detention facility and she said that she had been forced to commit perjury. But the judge rejected this petition, because, according to the prosecution case, the conversation between Tuletayeva and Sapargali in the detention facility was of a private nature. Investigative actions on reports of the exertion of pressure on the family members, as well as the torture of Roza Tuletayeva by the NSC members have not been conducted, neither have they been considered by the court, as with the previous trial of 37 oil workers.

During the closing arguments, Vladimir Kozlov has repeatedly emphasised the fact that the testimony of many of the witnesses of the prosecution were based on rumours – many could not explain where they got the information which was written in their statements.

On the 19th of September, 2012, at the trial, an independent expert from Russia, Dmitriy Starostin   (a psychologist, who works in the “Bureau of Independent Expertise”, Moscow), made a statement.  The expert said that approximately 30 videos and 20 text items have been analysed.

The expert came to the following conclusions:

In violation of the principle of the presumption of innocence, on the 24th of September, 2012, prosecutor Emirgali Zhanayev  told the court that “Vladimir Kozlov’s guilt had been proven completely during the trial”, and a number of independent media in Kazakhstan (“K-plus”, “Stan-TV”, “Respublika”) were referred to as “the media controlled by Mukhtar Ablyazov.” The prosecutor also stated that the “Alga!” opposition party was financially supported directly by Mukhtar Ablyazov”.

According to the public prosecution, Ablyazov’s organised criminal group, which launched its activity in Zhanaozen in 2011, had the following structure:

Finally, the prosecutor Emirgali Zhanayev stated that the actions of Ablyazov’s organised criminal group “for the first time in the history of Kazakhstan led to the long-lasting strike that ended with the events of December 2011 in Zhanaozen.” Also unexpected was the statement made by the prosecutor that “MEPs, publicly voiced the calls for the seizure of power and undermining of the power” in Kazakhstan.

Addressing the judge, the prosecutor demanded that the defandants be sentenced to terms of imprisonment, since they are “socially dangerous people”:

The comments of the observers and the Kazakh public figures

International observers are concerned over the political nature of the case and the numerous serious violations of fair trial standards. Western journalists claim that the main reason for the trial of Kozlov is the fact that his work is dangerous for the autocratic regime of Nazarbayev.

The reason for Vladimir Kozlov’s oppression by the Kazakh authorities was stated by Yermukhamet Yertysbayev, Nursultan Nazarbayev’s adviser, who commented on the trial of the oppositionists for  the media: “We have an article on ‘inciting social discord’ in the Constitution.  Ablyazov wrote letters to oil workers, where Kozlov, and the members of the ‘Alga’ party addressed the oil workers with the words: “Look, your salary amounts to 200 thousand tenge, while at the same time the managers earn 100-150 thousand dollars”. This was the incitement of social hatred”.

On the 24th of September, 2012, member of the Polish Sejm, Marcin Święcicki during the monitoring of the trial of the oppositionists in Aktau stated that he was shocked by the prosecutor’s classification of members of the European Parliament as criminals. In the interview given to the K+,  Mr. Święcicki said: “As for the words “break down” and “dump” that the prosecutor quoted as the evidence of an attempt to overthrow the constitutional order, I  should say that every day in the Polish Parliament I hear phrases like: “Let’s overthrow this government”, “Let’s dump this government”.  “These are commonutterances of political debate. I hear it every day from our opposition and cannot see anything special in them. In order to violently overthrow the constitutional order, you need to collect weapons, collect the military workers, but I could not see any such deeds proven in the material evidence of the prosecution”.

The Open Dialog Foundation hereby calls on the OSCE and the EU to closely monitor the judicial process and to send official observation missions to Kazakhstan in order to monitor the independence of trials of the oppositionists.