Search
The Open Dialogue FoundationExternal SourcesMaia Sandu after meeting with Poland’s ambassador: Warsaw authorities are not interfering in the political struggle in Chisinau

The embassy of Poland is upsetthat the decision of a Polish institution in relation to the non-governmental organization Open Dialog Foundation is being used against the opposition in Chisinau.

At least that is what Maia Sandu is writing after meeting with Polish ambassador Bartłomiej Zdaniuk, reports unimedia.info. 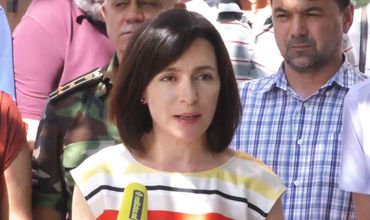 “Yesterday upon the invitation of the ambassador of the Polish Republic [sic] in the Republic of Moldova Mr. Bartłomiej Zdaniuk we discussed the defamation campaign begun by the Democratic Party against pro-European opposition parties. Mister ambassador expressed regret in connection with the fact that the decision of a Polish institution in relation to the non-governmental organization Open Dialog Foundation is being used against the opposition from Chisinau and underscored that the Polish authorities have nothing in common with this defamation campaign and, in particular, that the decision does not have anything in common with the espionage about which some mass information media from Chisinau are insistently speaking. Mister ambassador noted that the Warsaw authorities are not interfering in the political struggle in Chisinau and do not want for their internal decisions to be used for such aims.

“The campaign to manipulate DPM exhibitors is worthy of contempt. They have broken into our electronic mail and are ‘proud’ of their deed, having published an invitation to a European Parliament that had been received by us. If they have already sneaked like thieves into our mail, I do not understand why they did not make public the official invitation received from Ms. Anna Fotyga, a Polish deputy to the Europarliament and chair of the European Parliament subcommittee on security and defence, to participate in a discussion of the situation in the Republic of Moldova organized by representatives of several parliamentary groups in conjunction with the Open Dialog Foundation headed by Lyudmila Kozlovska. They did not publish this invitation because it is complicated, even for manipulators from the DPM, to accuse the chair of the European Parliament’s Committee [sic] on Security and Defence, as well as other distinguished members of this institution, of espionage to the benefit of Russia”, – writes Sandu on her page in Facebook.