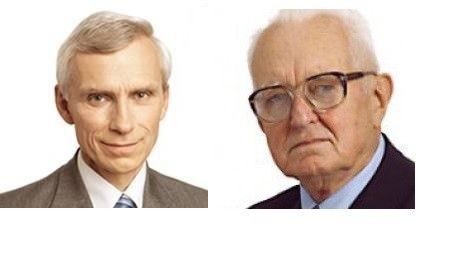 Is the expulsion of the head of the Open Dialog Foundation from the EU at the request of Poland a victory for the Russian services, for the ODF having gotten under their skin? That’s what Andrzej Wielowieyski and Marcin Święcicki think. They disagree with Katarzyna Pełczyńska-Nałęcz, who does not come to a conclusion about the ODF’s affiliations, but criticises the disastrous actions of the Polish services and the “on the Russian agent” method.

In defence of Lyudmyla Kozlovska, the president of the Open Dialog Foundation expelled from Poland and the EU, two well-known pro-democracy politicians write to OKO.press. They take issue with the argument presented by Katarzyna Pełczyńska-Nałęcz, who took a critical position on the methods used by the Polish services, but also drew attention to the “controversial connections and roots of the ODF”.

Pełczyńska-Nałęcz: We need to defend principles, not the Open Dialog Foundation.

“This event caused great controversy. On one side (mainly right-wing), accusations appeared against the ODF. On the other, there were accusations that the authorities were acting anti-democratically,” wrote Katarzyna Pełczyńska-Nałęcz, an expert in international politics, former deputy minister in the Ministry of Foreign Affairs, former Polish ambassador in Moscow and currently the director of forumIdei, a think tank at the Stefan Batory Foundation. She also argued that the pro-democratic circles in Poland are facing a very important dilemma: the choice between defending the freedom of non-governmental organisations and solidarity with their own state in the face of a possible threat from the Russia – “a big brother”. […] Muteness in the ODF case is also not an option. The method for the “Russian agent” may have other uses. From seemingly obvious cases, you can quickly go to any other.”

“The ODF’s controversial connections have been written and spoken about for years (well before the PiS government).  It is safe to say that in this area there is no other organisation surrounded by a climate of suspicion and ambiguity. Apart from Polish publications, information about the ambiguous activities of the Open Dialog have also appeared in Moldova and Ukraine,” wrote Pełczyńska-Nałęcz.

On the question of what pro-democracy organisations should do, she writes, “Demand that Poland be credible with its allies, that the special services of EU countries will receive convincing information that the expulsion of Lyudmyla Kozlovska is not a political matter but counteracting a real security threat to the Polish state.”

Wielowieyski and Święcicki: Great success of the services of Russia and Kazakhstan?

Andrzej Wielowieyski is a catholic activist and an activist for the democratic opposition in the Polish People’s Republic, a participant of the Round Table, MP, senator, deputy speaker of the Senate, and authority in matters of civil society. He is also a member of the Board of the Open Dialog Foundation.

Marcin Święcicki, MP from the PO list, is a coordinator of Polish experts on local government reform in Ukraine. He participated in the Round Table, but on the opposite side, as a member of the Polish United Workers’ Party Central Committee. He was the minister of foreign trade in the government of Tadeusz Mazowiecki, then president of Warsaw. Recently, he was the co-author of the report on the state of human rights in Kazakhstan (May 2018).

Both accuse Pełczyńska-Nałęcz of underestimating the achievements of the ODF in the defence of “people prosecuted and exterminated by the authoritarian rulers of Russia, Kazakhstan or the Moldovan oligarchs”, and suggest that suspicions about unclear connections and funding have been cast by the secret services of these countries on the ODF President to discredit her and make her work impossible.

Here is the full text of their polemics.

Deportation of Lyudmyla Kozlovska – a great success of the services of Russia and Kazakhstan? Marcin Święcicki and Andrzej Wielowieyski correspond with Katarzyna Pełczyńska-Nałęcz

In her text “Special services have failed” Katarzyna Pełczyńska-Nałęcz on one hand rightly criticises the Polish services for the way they led to the expulsion of Lyudmyla Kozlovska, head of the Open Dialog Foundation (ODF), from the European Union, but on the other, she claims that the Foundation should not be defended.

There are two big gaps in the reasoning of Pani Pełczyńska-Nałęcz.

First of all, she does not say anything about the huge achievements of the ODF, which did a great deal in the defence of people prosecuted and exterminated by the services of Putin, Nazarbayev, Yanukovych and Plahotniuc (these last three being two Moldovan super-giants and a media mogul and leader of the ruling party who has corrupted almost the entire state apparatus of the country ).

Second of all, these achievements may be the reason that the Kazakh and Russian services have had enough of this Foundation and are doing their best to discredit Mrs Kozlovska and the ODF.

It’s about ODF activities like hiring lawyers, observing missions on political processes, initiating magazine articles in defence of persecuted people, numerous reports and bulletins informing not only about problems with human rights, but also the people responsible for them, supporting Majdan and Ukraine in the war with Russia, lobbying in the European Parliament and making efforts to extend personal sanctions (including encompassing Putin with them), etc., etc.

We confirm what Andrzej Wielowieyski, a member of the ODF Board, wrote in his article in “Rzeczpospolita” about the very positive and concrete activity of the ODF, including changes that, as a result of lobbying by them and others have been introduced into Interpol’s procedures to prevent the institution from being used to extradite political refugees. This really upset the dictators in the East.

The revenge of Plahotniuc

The author writes that the Moldovan media carried information about the “ambiguous actions” of the ODF. It did not take into account that the ODF defends about 20 attorneys, judges, activists and journalists in Moldova, revealing the embezzlement of Vladimir Plahotniuc who, in revenge, does what he can (and he can do a lot) to deprive them of freedom and discredit Lyudmyla Kozlovska.

The ill-conceived operation of our services resulted in Plahotniuc getting a lot of support. Who, if not the Russian and Kazakh services, produces and publishes false recordings from intimate scenes in a hotel room, or photographs of a Russian passport issued in absentia in Mrs Kozlovska’s name after the invasion of the Crimea. Incidentally, Russian citizenship was also imposed on Oleh Sencow among others).

The Ukrainians are defending her

In turn, a false document presenting an alleged investigation conducted against Lyudmyla Kozlovska by the General Prosecutor’s Office of Ukraine was denied by the representative of the institution itself. Eleven non-governmental Ukrainian organisations called for the defence of Lyudmyla Kozlovska.

The Kazakh service is capable of many things in the fight against Ablyazov.

[Mukhtar Ablyazov is a Kazakh oligarch, a billionaire who quarrelled with Kazakh’s President Nazarbayev and is being pursued by Kazakhstan throughout Europe for prosecution. Ablyazov was involved in the defense of ODF. Reports on financing ODF by him are not confirmed – OKO.press]

For example, the Kazakh service paid the best lobbyists and detective companies and it was able to deport Ablyazov’s wife and his young daughter on a private plane from Italy to Kazakhstan in less than 2 days. For half a year, the Italians repented and finally clawed the kidnapped back.

The latter received huge budgets to search for and follow throughout Europe not only Ablyazov himself, but also a number of people associated with him. To this day, people who do not want to testify against Ablyazov are imprisoned and being tortured in Kazakhstan, which is publicised by the ODF and other human rights organisations.

At the request of Russia, France arrested Ablyazov (allegedly collaborating with the Russian services, according to various pseudoexperts), and after three years of detention, acknowledging the political motivation behind his persecution, finally did not extradite him.

Pełczyńska-Nałęcz demands that in the name of their credibility towards their allies, the special services of the EU countries “should receive convincing information that the expulsion of Lyudmyla Kozlovska is not a political matter, but counteracting a real threat to the Polish state”.

And if such information simply is not there, perhaps it would be necessary to write that in such a case the services should apologise to Mrs Kozlovska and withdraw the ban on entry to the Schengen area? We would like to point out that the ban was not issued when the analysis of some materials and information was completed, but exactly on the day when Lyudmyla Kozlovska’s permit for temporary residence in Poland expired.

Apart from “financial doubts”, no other reasons for expulsion were given. If our services have doubts about the finances of the organisation, they should explain the matter with the interested parties, and not harangue across half of Europe. Besides, the authorities have already carried out financial controls on the ODF. At that time they had no objections or doubts, which appeared only after Kramek’s article.

It is worth defending the Open Dialog Foundation, because our impression is that precisely the services of Russia and Kazakhstan, and Vladimir Plahotniuc are most interested that the anti-reliance and pro-European activities of the ODF Foundation should be stopped. And the fact that Bartosz Kramek unnecessarily wrote what he wrote is a completely different story.