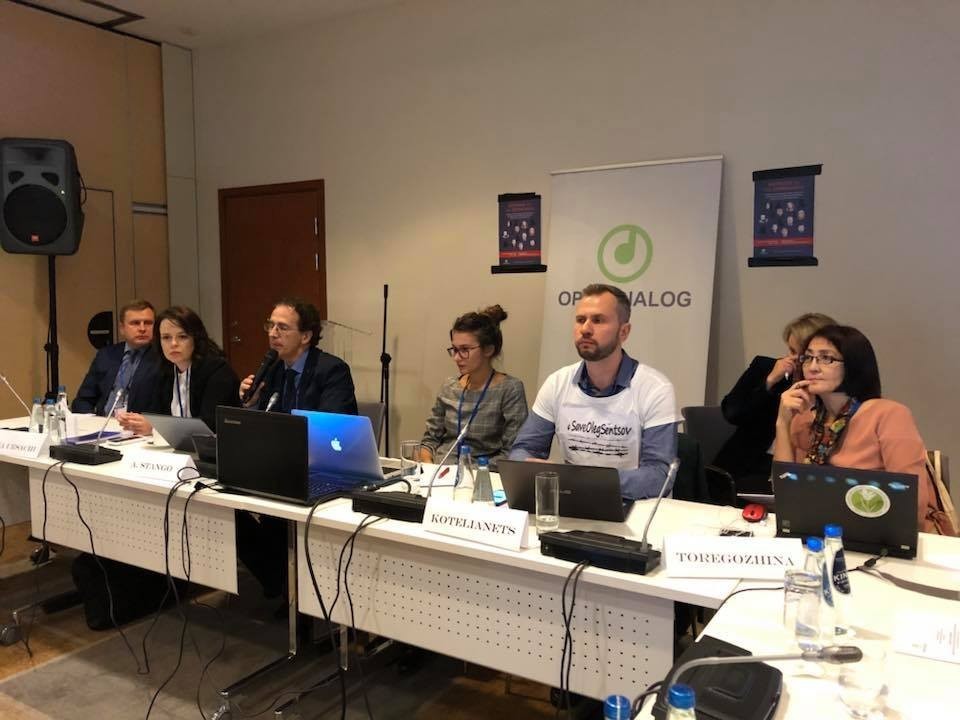 Between Tuesday 11 and Wednesday 12 September 2018, the ODF conducted an advocacy mission in Warsaw at the OSCE Human Dimension Implementation Meeting, a forum aimed at providing a platform for dialogue between NGOs and the representatives of OSCE Member States, in order to evaluate the status of the human dimension, one of the three core founding dimensions of the OSCE.

During the two-day participation, ODF took part in Working Session 2 Freedom of the Media, Working Session 4 Rule of Law I – including independence of judiciary – and Working Session 5 Rule of Law II –prevention of arbitrary arrest, detention or exile, prevention of torture; protection of human rights in the fight against terrorism. At the plenary sessions, ODF brought to the table the cases of violations of human rights in the post-Soviet area, focusing in particular on cases of torture, politically motivated persecution and arbitrary detentions in Kazakhstan, the persecution of lawyers, the threats to the rule of law in Moldova and in the whole region of former Soviet countries.

Moreover, on Tuesday 11 September 2018, the ODF organised a side-event entitled “Defence for the Defenders: Lawyers and attorneys under attack for participation in politically motivated cases in the post-Soviet area and Turkey”.

Guests made contributions presenting the results of fact-finding missions, recounting their own stories and testimonies and providing recommendations.

Antonio Stango, President of the Italian Federation for Human Rights (FIDU), highlighted the main results of the three missions he participated in during the past few months in Kazakhstan, all conducted together with representatives of different European parliamentarians. Stango reported on the observation of trials, where irregularities and signs of politically motivated prosecution were found in the case of Iskander Yerimbetov.

In particular, Stango mentioned that “Mr Yerimbetov had originally been accused of an economic crime for which the pre-trial detention could not be longer than 6 months. Six months passed, the trial did not start and he remained in prison. The reason provided was that, in the meantime, he was accused of another crime – fraud – for which there is, however, no provision for pre-trial detention. When the lawyers filed a motion during the hearing, asking the judge to set Yerimbetov free because the law did not provide for any possibility to keep him in prison before sentencing, the judge simply decided to keep him in prison, considering the case serious enough, although the law did not provide for this”. Stango also underlined the lack of free access to hearings that should be public, and the breach of the principle of presumption of innocence, which is carried out through the fabrication of charges and evidence spread in defamation and disinformation campaigns, and puts the judiciary under undue pressure from the state apparatus.

Stango has also recently visited Moldova in a joint mission with ODF, which found several cases of violations of the right to defence and in particular of the right of the defendant to choose their own lawyer. Stango pointed out that in many cases “police officers, investigators or the prosecutor often ask the prisoners to refuse their chosen lawyer and choose a lawyer suggested by the authorities”. Moreover, in Moldova “there are judges who are persecuted for political reasons, because they want to exercise their profession independently”. “There are also judges that have been discriminated against and who are persecuted by other judges, depending on their opinions and refusal to sentence some people who are on a political opposition front against the government, or better to say the system of power”, he added. The whole system of the judiciary in Moldova is not independent at all, he concluded.

Ana Ursachi, persecuted lawyer from Moldova and currently asylum seeker in Poland, recounted her personal story. In her country, she was subjected to a huge smear campaign, spread by the media under the control of oligarch Vlad Plahotniuc. “This campaign was aimed at discrediting not only me as a lawyer but the whole activity of attorneys. The result was that many lawyers gave up defending individuals under prosecution for political reasons”. She mentioned the cases of persecuted judge Domnica Manole and the recent outrageous deportation of six Turkish lawyers from Moldova, stating that these are all signs of the rule of law being endangered in the country.

The persecution of lawyers who work for political prisoners is a serious problem in Ukraine as well, as explained by Igor Kotelianets, who chairs the Ukrainian public organisation “Association of relatives of political prisoners of the Kremlin” and is the brother of the Ukrainian political prisoner Yevgeny Panov, who is being illegally held by Russia in occupied Crimea. Speaking on behalf of relatives of hostages of the Kremlin, he underlined that “lawyers who try to protect Ukrainian political prisoners from Russian arbitrariness are our only way of communicating with the Kremlin prisoners. Thanks to lawyers who work for political prisoners in the occupied Crimea and Russia, we know that our relatives are alive, we know where they are”. However, he stressed, “lawyers are also under pressure from the Russian authorities.  The Russian authorities used administrative arrest for a post in a social network as a way of pressuring the Crimean lawyer Emil Kurbedinov, who was sentenced to a 10-day administrative arrest for posting on a social network, and a search was carried out in his house as well as in the office”.

Kotelianets called on OSCE member countries to provide continuous support in activities aimed at the release of political prisoners and to insist on personal sanctions against Russian officials involved in fabricating cases against Ukrainian political prisoners.

Andrii Chernousov, leading expert at the Kharkiv Institute for Social Research, shared the findings of his recent mission of research in Kazakhstan. He warned about the independence of lawyers and the judiciary, pointing out the “serious threat to independence and guarantees of advocacy” that was posed by “the Law of the Republic of Kazakhstan on Advocacy and Legal Assistance, adopted on July 5, 2013, and coming into force on July 15, 2018”, which was adopted while he was in the country. Chernousov listed some concrete worrying examples from the text of the law such as, “at the request of anti-corruption bodies, the lawyer is obliged to disclose information that is classified as covered by client privilege (Article 37, paragraph 4); the composition and powers of the Qualification and Attestation Commissions of lawyers are approved by the Ministry of Justice, which clearly contradicts the principle of the procedural independence of lawyers (Article 39); lawyers file, equipment, telephones, etc., can be seized on grounds that are not described in the law (paragraph 5 of Article 35)”.

Bakhytzhan Toregozhina, head of the social foundation “Ar Rukh Hak”, reiterated how hard it is to find lawyers who are willing to engage in defending victims of political prosecution and torture, given the many pressures they are subjected to. She mentioned the cases of Yerimbetov, Ablovas Dzhumayev, Almat Zhumagulov and Kenzhebek Abishev as examples of the difficulty for political prisoners to freely access justice and choose their own lawyer. Furthermore, she expressed her regret for “the most significant and principal part of the comments and recommendations of international organisations and experts have not been reflected in the text of the Law on Advocacy and Legal Assistance  and therefore the reform is incompatible with international standards and the basic principles of the organisation of activities advocacy, and do not comply with Kazakhstan’s international obligations, in particular under the International Covenant on Civil and Political Rights and the UN Basic Principles on the Role of Lawyers”. As a conclusion, she called for “all recommendations of international bodies with regards to the independence of the judiciary and Bar Associations to be promoted further and implemented.

Finally, exiled Turkish lawyer Mehmet Kasap sent a video to ODF to voice his concern on behalf of the Arrested Lawyers Initiative, which seeks protection and justice for those lawyers who became victims of the harsh political prosecution that commenced after the failed coup attempt in Turkey. “After the state of emergency was declared, a mass arrest campaign against Turkish lawyers started the same day. Since then, 581 lawyers have been arrested, 1500 lawyers have been taken into custody or are still wanted and, as of today, 169 lawyers have received sentences of between 2 and 14 years. These are not just numbers, but lives,” he stressed. “The lawyers are targeted mostly on the basis of their clients’ profiles”. The rights to a fair trial and access to a lawyer are gravely infringed: in many cases, Kasap recalled, “lawyers who went to police head office to give legal aid to detained lawyers were arrested in turn”.

The persecution of lawyers, together with the decreasing independence of the judicial system, unfortunately represent a worsening trend in many countries who are governed by systems of power that maintain an autocratic stance, in the post-Soviet region and not only, as shown by the alarming case of Turkey. The ODF calls on all OSCE member states to ensure that the independence of the judiciary, as a cornerstone of a democratic system, be provided and implemented. Violation of the basic principles of the rule of law should be investigated thoroughly and individuals responsible for such violations should be included in the list of personal sanctions based on the model of the Magnitsky Global Law.

The full statements of the contributions can be downloaded on the webpage of OSCE HDIM 2018 at the following links:

The live recording of the side-event is available on the Foundation’s Facebook page.