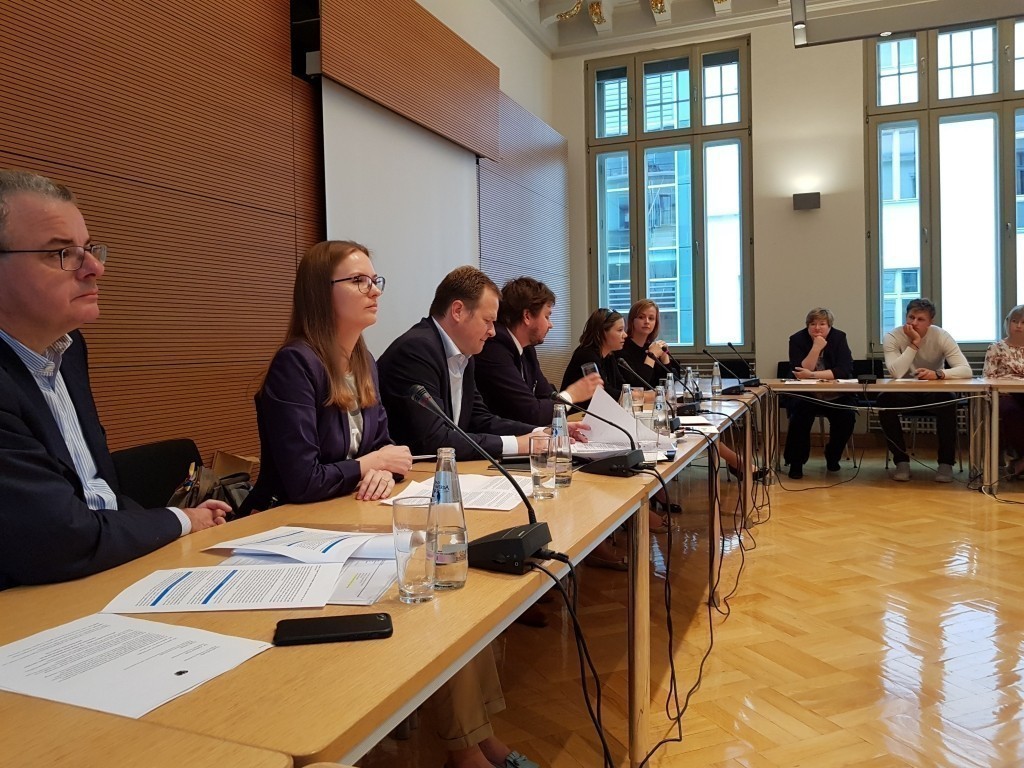 “The populist path towards authoritarianism must be stopped”. Lyudmyla Kozlovska’s speech at the Bundestag

First of all, I would like to express my sincere gratitude to Mr Frank Schwabe MP and Dr Andreas Nick MP for all their support, especially their invitation to speak at the Bundestag on the worrying situation in Poland. I cannot thank you enough for your help; we really appreciate it.

It was a vital step not only for my husband and I. Most importantly, I perceive it as a strong sign of solidarity with all those who struggle for the independence of the judiciary and for European values in Poland.

The Open Dialog Foundation is a non-political, non-governmental organisation, whose activity mainly concerns post-Soviet countries. We work internationally to support social activists, reformers and human rights defenders, as well as oppressed opposition politicians, sponsors of the opposition, independent journalists and people associated with them. Until 2017, we have never formally spoken out on the internal situation in Poland – the same Poland that had been often a role model and inspiration for its eastern neighbours and other post-Soviet states wishing for a democratic transformation. Polish people have shown them great solidarity, with my second homeland being a safe haven for political refugees. Sadly, it is not the case anymore.

We were amongst the thousands of people in Poland protesting in defence of the rule of law in July 2017. My husband’s article on possible civil disobedience actions, published on his personal Facebook account at that time, triggered a wave of repression against our organisation and family. Key ministers of the Polish government publicly discussed measures that should be employed against us and other civil society organisations critical of the state authorities.

We have been accused of intending to provoke a bloody revolution (so-called Maidan) and overthrowing the government in order to achieve the interests of foreign states and other foreign actors: George Soros, the Russians, the Germans, the so-called “Brussels elites”, Ukrainian nationalists, various foreign intelligence services. The state and other right-wing media outlets have been producing new fake news and conspiracy theories about us on a daily basis. This resulted in a massive wave of hate speech and direct threats against us.

The Minister of Foreign Affairs attempted to take over the control of the Foundation requesting the court to appoint his commissioner, replacing our management board. They lost the dispute twice: the court dismissed the motions filed by Witold Waszczykowski and his successor Jacek Czaputowicz, citing the constitutionally-guaranteed freedom of speech and referring to the fact they had not even been able to specify which provisions of the law were allegedly violated by us.

A special fiscal and customs control was initiated on the request of the Minister-Coordinator for Secret Services and the Minister of Foreign Affairs. Despite being prolonged already several times, it has not brought any findings so far. No charges have been brought against me, nor the foundation itself. We feel they persecute me strictly because, as a foreigner, I am an easier target than my husband. It could be also perceived as a means of intimidation, a warning for other foreign nationals living in Poland, especially Ukrainians, as well as for their families, in case they wished to oppose the current government.

Thousands of activists and at least several other NGOs and civic initiatives in Poland have been attacked over the last months as well. The Committee for the Defence of Democracy, the Citizens of the Republic of Poland, women’s rights NGOs and many protesters have found themselves under pressure (including the use of police, surveillance, seizures of documents and computers) over the last months.

The abuse of the SIS platform is just yet another attempt to persecute us. We had not had any problems nor disputes with the Polish authorities earlier, before 2017, so we perceive all those actions clearly as of a political nature, not a coincidence. This was also openly admitted by Mr Waszczykowski recently as he justified the ban claiming we had been conducting anti-state activities by influencing foreign politicians abroad, particularly in Brussels.

Because of the entry ban imposed by the Polish authorities, I was forced to stay in Kyiv for precisely one month – my detention had taken place on the 13th of August and I was expelled the day later. I have not been notified on any factual basis behind my SIS ban – everything has been highly classified, with a part of my case file containing secret information, the disclosure of which would result in serious harm to the state. Officially, I remain a threat to national security in Poland and should be treated as such by all Schengen member states. We are exploiting all possible legal measures but the Polish law deprives me of the right to defend myself. According to prominent lawyers, it is not compliant with the European regulations and the abuse can violate the EU treaties, primarily the principle of sincere cooperation.

I am here thanks to the uncompromising Members of the German Bundestag and delegates to the Parliamentary Assembly of the Council of Europe, our hosts who truly care about the state of the rule of law, civil liberties and human dignity in Europe. Although I do not know what my future will look like, I am very grateful for this opportunity.

However the Polish President, Andrzej Duda, in his latest speech, said that “the EU is an imaginary community which brings little benefits”, we believe that the Polish government must not be allowed to disintegrate the EU from within, taking advantage of the SIS to persecute its critics and abusing the trust between member states as well as the European laws and values it vowed to uphold. The populist path towards authoritarianism must be stopped.