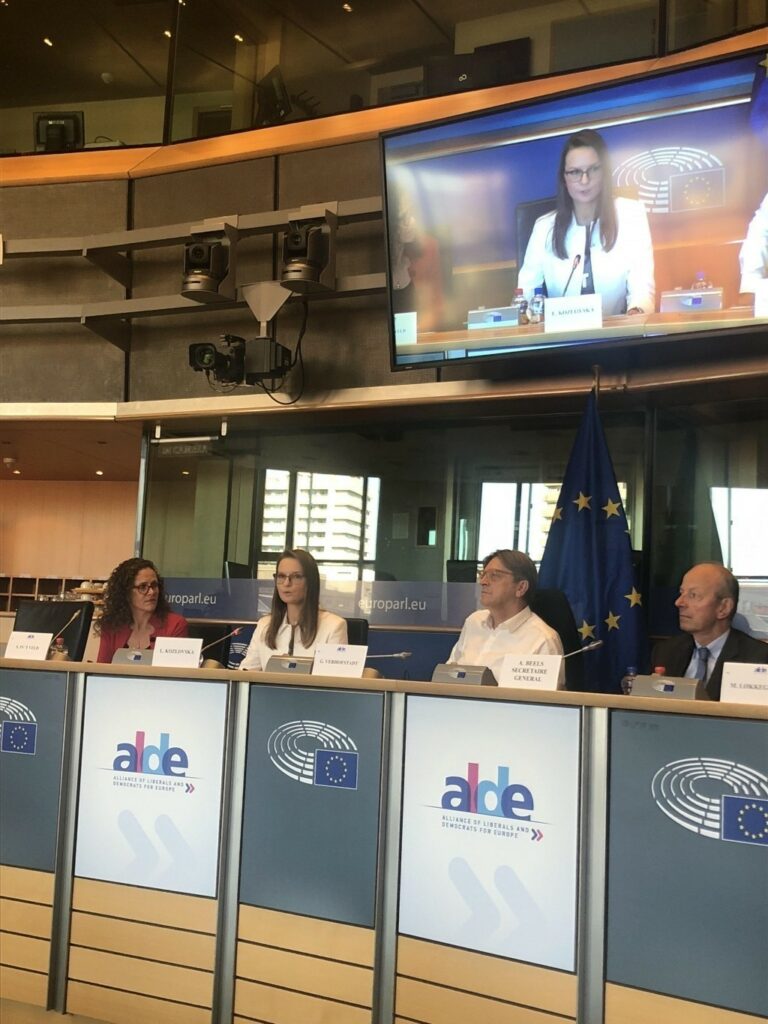 On Wednesday 26 September 2018, Lyudmyla Kozlovska, President of the Open Dialogue Foundation, was invited to the European Parliament, in Brussels, by Guy Verhofstadt, President of the ALDE Group, to deliver her speech on the rule of law and the situation of the civil society in Poland. Read her full intervention below.

First of all, I would like to express my sincere gratitude to President Guy Verhofstadt and all of you, for your support and the invitation that has brought me here, to Brussels and to the European Parliament. I perceive it as a strong sign of your solidarity with all those who struggle for the independence of the judiciary and for European values in Poland.

The Open Dialogue Foundation is a non-political, non-governmental organisation, whose activities focus mainly on post-Soviet countries. We work internationally to support social activists, reformers and human rights defenders, as well as oppressed opposition politicians, sponsors of the opposition, independent journalists and people associated with them. Until 2017, we have never formally spoken out on the internal situation in Poland – the same Poland that had been often a role model and inspiration for its Eastern neighbours and other post-Soviet states struggling for a democratic transformation. Polish people have shown them great solidarity, with my second homeland being a safe haven for political refugees. Sadly, it is not the case anymore – instead of being an inspiration and model to follow, since Law and Justice took power, Poland has been adopting post-Soviet standards of state governance and public life.

As you are well aware, the ruling party, Law & Justice, started dismantling the constitutional order by quickly seizing control of institutions that should always remain independent from the legislative and executive power. But that was just the beginning.

The escalating assault on the rule of law in Poland is not an abstract issue. It has a very direct, human dimension. According to the latest report prepared by Obywatele RP – the Citizens of the Republic of Poland civic movement – there are more than 2,000 ongoing proceedings against peaceful protesters defending the constitution, fighting for women’s rights, or standing up to various radical right-wing and fascist groups in Poland.

Although not comparable in terms of severity, the current harassment and repressions of activists have absolutely no precedent since the fall of communism in 1989. Activists of the Committee for the Defence of Democracy, the Citizens of the Republic of Poland, women’s rights and anti-fascist movements, as well as ordinary citizens voicing their concern, have found themselves under pressure. Over the last months there have been cases of surveillance, seizure of documents or mobile phones and computers taken from NGOs offices. A fellow activist, Justyna Butrymowicz, recently had her hand broken by police officers. Unjustified, excessive use of force advances.

But civic activists are not the only ones subjected to pressure. Judges refusing to accept political influence are facing disciplinary consequences from the hands of newly-appointed court presidents, subordinated to the control of the Minister of Justice and the similarly-dependent National Council of the Judiciary. In most severe cases they even face criminal charges. Judges Dominik Czeszkiewicz, Igor Tuleya and Waldemar Żurek are amongst them. Serious doubts apply to the cases of prosecuted opposition politicians, members of Platforma Obywatelska (the Civic Platform), like MP Stanisław Gawłowski or former senator Józef Pinior.

There is censorship and propaganda in the state-controlled media on a level unseen since communist times. Ivan Shyla, a Belarusian associate of the state-owned Polish TV channel Belsat was fired a few days ago, as he had posted, on his private Facebook page, an official photo showing Donald Trump and his Polish counterpart Andrzej Duda during their recent meeting in the White House. He barely made a comment but was immediately dismissed as the Belsat director, Agnieszka Romaszewska, amongst many others, had perceived the photo as showing the Polish President in negative light.

We were among the thousands of people in Poland protesting in defence of the rule of law in July 2017. My husband’s article on possible civil disobedience actions, published at the time on his personal Facebook account triggered a wave of repression against our organisation and our family. Key ministers of the Polish government publicly discussed measures that should be employed against us and other civil society organisations critical of the state authorities.

We have been accused of intending to provoke a bloody revolution (so-called Maidan) and planning to overthrow the government in order to achieve the interests of foreign states and actors: George Soros, the Russians, the Germans, the so-called “Brussels elites” including one of Poland’s greatest friends in Brussels, Guy Verhofstadt, Ukrainian nationalists, various foreign intelligence services. State-owned and other pro-government media outlets have been producing new fake news and conspiracy theories about us on a daily basis, very often simply reproducing disinformation purposefully created by post-Soviet regimes in Kazakhstan, Russia and Moldova that we oppose. This resulted in a massive wave of hate and direct threats against us.

The Minister of Foreign Affairs attempted to take over the control of the Foundation requesting the court to appoint his commissioner, who would replace our management board. The Ministry lost the case twice: the court dismissed the motions filed by minister Witold Waszczykowski and his successor Jacek Czaputowicz, citing the constitutionally-guaranteed freedom of speech and referring to the fact that the ministers have not even been able to specify which provisions of the law were allegedly violated by us.

A special fiscal and customs control was initiated on the request of the Minister-Coordinator for Secret Services and the Minister of Foreign Affairs. Despite being prolonged several times already, it has not brought any findings so far. No charges have been brought against me, my husband, nor the foundation itself. It seems they persecute me strictly because, as a foreigner, I am an easier target than my husband. It could also be perceived as a means of intimidation – a warning for other foreign nationals living in Poland, especially Ukrainians, for their families, and for any citizen wishing to oppose the current government.

A few months ago, three MEPs, representatives of Law and Justice (Ryszard Czarnecki, Ryszard Legutko, Kosma Złotowski) failed in their attempt to revoke the Open Dialogue Foundation’s registration in the EU Transparency Register. Their requests were dismissed by the European Commission as groundless.

I was supposed to speak about Ukraine as well, where civic, mainly anti-corruption activists are under attack on a daily basis. But this is hardly a new or surprising issue in a country torn by war with neighbouring Russia. Repression against activists in an EU Member State, on the other hand, would be unthinkable just a few years ago.

The abuse of the Schengen Information System is yet another attempt to persecute us. We had not had any problems nor disputes with the Polish authorities earlier, before my husband’s article in 2017, so we are convinced this situation can not be a coincidence, but rather has to be of political nature. This was even openly admitted by Mr Waszczykowski recently, as he justified the ban claiming we had been conducting anti-state activities by influencing foreign politicians abroad, particularly in Brussels. Fortunately, today it appears that his efforts brought little results.

Because of the entry ban imposed by the Polish authorities, I was detained at Brussels airport on the 13th of August and expelled to Kyiv the day after. I have not been notified of any factual basis behind the SIS ban – everything has been highly classified, with a part of my case file containing secret information, the disclosure of which – and I quote – would result in serious harm to the state. Officially, I remain a threat to national security in Poland and should be treated as such by all Schengen member states. We are exploring all possible legal measures to lift the ban, but Polish law effectively deprives me of the right to defend myself and appeal the SIS entry. According to prominent experts, relevant Polish law is not compliant with the European SIS II regulation. This abuse of SIS can even violate European treaties, primarily the principle of sincere cooperation. The Polish Helsinki Foundation for Human Rights requested Commissioner Dimitris Avramopuls to ensure the compliance of Polish migration and asylum laws with EU law, including the initiation of infringement proceedings.

However, Polish president, Andrzej Duda, in his latest speech, said that “the EU is an imaginary community which brings little benefits”. We believe that the Polish government must not be allowed to disintegrate the EU from within, taking advantage of the SIS to persecute its critics and abusing the trust between member states as well as the European laws and values it vowed to uphold. It is very sad to admit but I must say that the stance of the Polish President very closely resembles the rhetoric and position of the ruler of the Kremlin.

The EU has to establish an effective legal and practical mechanism to prevent future abuse of the SIS by illiberal, oppressive governments of its member states by introducing means of effective supervision. The populist path towards authoritarianism must be stopped. The fate of the European Union, as we know it, is at stake. And it seems its most thoughtful, committed citizens and residents will be the first victims.