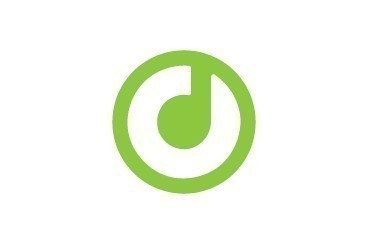 On October 10, 2018 it was announced in the media, starting with the website of a Ukrainian civic organisation/media outlet “Stop Corruption”, that the Department of the Security Service of Ukraine (SBU) in the Zakarpattya region city of Uzhhorod has initiated, on September 25, 2018 an investigation into ODF President Lyudmyla Kozlovska.

This is not true. The actual investigation’s scope, as well as reasons for initiating it, wildly differ from what was reported by the media. 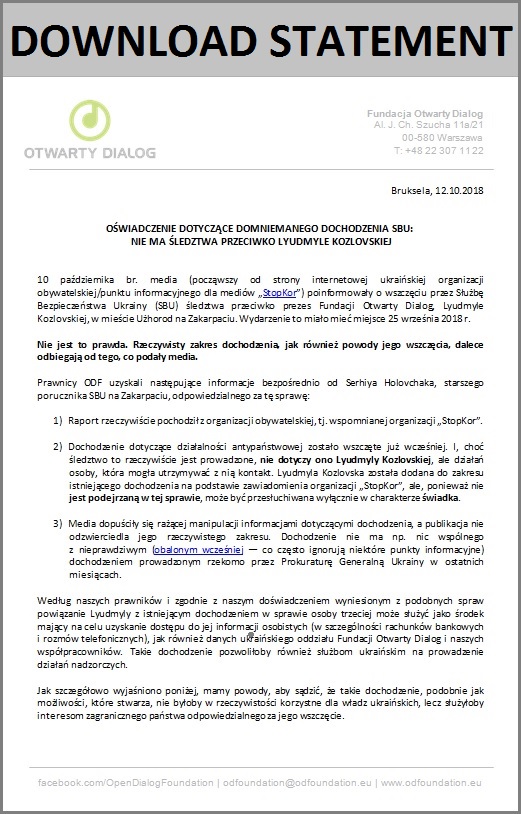 ODF’s lawyers have learned directly from Serhiy Holovchak, senior lieutenant at the Zakarpattya SBU, responsible for the case, what follows:

1)     A report indeed came from a civic organisation, i.e. the mentioned “Stop Corruption”;

3)     The media have gravely manipulated the information regarding the investigation and the publication does not reflect its actual scope. For example, it does not have anything in common with the fake (debunked earlier – a fact frequently ignored by some media outlets) investigation allegedly conducted by the General Prosecutor’s Office of Ukraine in earlier months.

According to our lawyers and our own experience with similar cases, linking Lyudmyla with an existing investigation concerning a third party may serve the purpose of getting access to her personal information (bank accounts and phone conversations in particular), as well as the data of the Ukrainian branch of the Open Dialogue Foundation and our associates. Such an investigation would also allow Ukrainian services to conduct surveillance operations.

As explained in detail below, we have reason to believe that such an investigation, as well as the possibilities it creates, would not in reality be for the benefit of Ukrainian authorities, but to serve the interest of a foreign state responsible for instigating it.

If requested, ODF can share the phone number of Lt Holovchak, as well of our attorney, Mr Julian Khorunzyi, who contacted him on our behalf.

ODF is currently preparing a lawsuit against “Stop Corruption”, demanding the immediate correction of false information published on their website.

Edit: On 2 November 2018, the Head of the Investigation Department of Ukraine’s Security Service Directorate in Zakarpattia Province sent a letter to the Ukrainian counsels of the Open Dialogue Foundation, in which he informed them that ‘L. P. Kozlovska is not a party to criminal proceedings’. You can read the translation of the letter here.

First of all, while the report of the investigation came as news to the public, with Polish pro-government media hailing it as “proof that the government was right to expel Kozlovska”, we have been aware for over a month now of an investigation likely to be initiated in Ukraine (by the prosecutor’s office or security services), with Lyudmyla mentioning that possibility in her interviews and meetings while still in Kyiv.

Our suspicion was based on information we had received from a trusted source, claiming that Kazakhstani, Russian or Moldovan secret services could manage, within a few weeks, to bribe or exert other unlawful pressure on Ukraine’s law enforcement bodies, with the intent to initiate an investigation preventing Lyudmyla from leaving the country.

The mechanism of post-Soviet states politically influencing and/or corrupting Ukrainian authorities in order to prosecute or otherwise persecute their opponents has, unfortunately, been quite common in the country in recent years, which has been pointed out in numerous reports, including our own. This has led to illegal extraditions, kidnappings and other persecution of activists and refugees fleeing from post-Soviet dictatorships such as Kazakhstan or even Russia itself (the outrageous case of the ATO soldier Timur Tumgoyev), or just recently Turkey.

Earlier, Mikheil Saakashvili (after being illegally stripped of his Ukrainian citizenship) and several of his Georgian associates were deported from Ukraine without court warrants.

Sadly, serious doubts with regard to the role of Ukrainian law enforcement agencies and judiciary were brought, among others, by the Atlantic Council, The Economist, Open Democracy, Kyiv Post, FIDH (Worldwide Movement for Human Rights) and ODF itself in the context of the harassment and persecution of reformers, civic activists and journalists. To prevent this abuse, ODF has called for reforms of the Prosecutor’s Office following the Maidan revolution and criticized lack thereof.

ODF, while always supportive of the Ukrainian state, has been vocal about human rights violations, corruption and its cooperation with authoritarian and hybrid regimes leading to serious human right abuses in the country. The Foundation, as well as Lyudmyla Kozlovska herself, have been advocating for the Global Magnitsky Act, as well as for imposing personal sanctions on highest Russian and other officials responsible for political persecution in post-Soviet states. ODF is also advocating for withholding international financial aid for Moldova and Kazakhstan from EU, IMF, World Bank and Council of Europe assistance programmes in case of human rights abuse or lack of proper reforms in those countries.

Those actions are counteracted by post-Soviet dictators and governments, media, law enforcement and secret services from the aforementioned states. In Moldova, at the personal request of the country’s super-oligarch and leader of the ruling party, Vladimir Plahotniuc, a parliamentary commission was established recently to investigate the “interfering of ODF and Lyudmyla Kozlovska in Moldova’s internal affairs”. It is worth noting that since July 2017, following Bartosz Kramek’s Facebook post on the need to defend the rule of law in the country, it has also been the case in Poland.

Bartosz Kramek and ODF were highlighting the need to end the impunity of corrupt Ukrainian officials as well.

We therefore believe that an actual investigation into Lyudmyla Kozlovska – if de facto instigated by a foreign government/secret services or their proxies – would benefit both the state responsible (most likely Kazakhstan, Russia or Moldova) as well as the involved representatives of the corrupt authorities themselves.

Furthermore, the SBU investigation, according to information and document provided by the “Stop Corruption” website, includes charges which are grand to the point of absurd: from “attempting to change the territorial integrity of Ukraine and publicly calling to do so”, through “fraud on a large scale”, to “high treason”, yet – despite the scale of the charges – it was initiated in a distant region bordering with Hungary. A region and city that Lyudmyla has never even visited.

First of all, given ODF’s persistent and strong pro-Ukrainian and anti-Kremlin attitude, backed by a substantial track record of activities (e.g. support mission during the Maidan revolution, a large campaign of humanitarian aid including protective equipment for Ukrainian troops, running the Ukrainian World centre in Warsaw, support for the post-Maidan reform process, including lustration, dozens of public gatherings and other meetings as well as high-level advocacy efforts on the international level), we find any claims of anti-Ukrainian activities on the part of ODF or Lyudmyla Kozlovska preposterous and even offensive.

What is more, ODF’s representatives, including Bartosz Kramek, Lyudmyla’s husband and Chair of the Foundation Board, have been frequently speaking on the necessity of imposing the toughest possible sanctions against Russia in the light of its invasion and occupation of Ukraine’s territory as well as advocating for financial and military support for Ukraine.

ODF and Lyudmyla have even received public support from the most prominent Ukrainian rights organisations, which had listed many of the aforementioned efforts, following the imposition of the Polish SIS entry ban.

Secondly, just the fact that the investigation pertaining to Lyudmyla is being conducted in Uzhhorod casts serious doubts as to its grounds. An investigation of high treason and other crimes against the state would have normally been initiated by central authorities in Kyiv, not a regional SBU office in the Zakarpattyan Oblast, unless it related to the issue of Hungarian interference/separatism in the region and possible Russian involvement there. Having said that, ODF representatives have always supported Ukraine’s territorial integrity and were never involved in the matter, nor have they had any links to the fragile situation in the region.

Our Foundation has already been targeted earlier this year by so-called journalists working for the website. They were detained and interviewed by Belgian police, having followed in Brussels Lyudmyla and Bota Jardemalie, a Kazakh lawyer and human rights defender who was granted political asylum in Belgium in 2013 and police protection following a failed kidnapping attempt. The same “journalists”, including one named Lilia Tkachuk, also stalked Lyudmyla in Kyiv, which was one of the reasons (besides the danger of a physical assault) to be given 24/7 protection.

Following only basic research, it is evident that the “Stop Corruption” website and related TV program also clearly do not fulfil the requirements of an independent investigative news outlet. One of the cases they were vocal on was defending the “Helix” financial pyramid scheme, the founder of which seemingly has business connections to both Kazakhstan and Moldova, and – according to some sources – is himself a member of the “Stop Corruption” association.

Furthermore, we have reasons to believe that the current persecution, with “Stop Corruption” as the instigator, is linked to the previous attacks on Lyudmyla Kozlovska coming from the post-Soviet region.

The “Stop Corruption” organisation’s harassment, including stalking in Brussels, started on the day following the publishing of the fake “sex-tape” by Kazakhstani and Moldovan propaganda, with the title “Lyudmyla Kozlovska ODF lobbyist of Mukhtar Ablyazov & Bill Browder”.

Bill Browderis one of the Kremlin’s top enemies globally, while Mukhtar Ablyazov, a businessman and leading Kazakh opposition politician, has been prosecuted by Putin’s regime on the request of Kazakhstani authorities. Ukraine’s authorities, since the time of Viktor Yanukovych, have also been involved in his prosecution. Also noteworthy is that the same lawyers and officials, at the highest level of Russian law enforcement, were dealing with both cases. Even France has recognised the political nature of this international cooperation, refusing Ablyazov’s extradition in 2016.

“Stop Corruption” “journalist” Lilia Tkachuk and cameramen have been known to follow the family and associates of Mukhtar Ablyazov in places as far as Vilnius, Geneva or Milan. The same “journalist” has distributed known fakes regarding Lyudmyla, including a fake Russian passport.

Most recently, on October 6, 2018 ODF’s delegation was harassed by a fake TV news crew when visiting London. The crew, claiming to be from British TV station Channel 4, ambushed Lyudmyla and Bartosz at an event organised by the Polish pro-democratic NGO KOD UK and tried to aggressively interview them, including using a print-out of the same fake sex-tape, following the releasing of which they became active. The crew fled in various directions when pressured for credentials. Channel 4 has confirmed that the crew was not theirs and a Police investigation into the incident is underway.

All of the above shows that an investigation initiated on the basis of a notification from groups such as “Stop Corruption” would most likely be politically motivated, with a high probability of being linked to the authorities of post-Soviet dictatorships. All of them have clear interest in harassing our Foundation and Lyudmyla Kozlovska personally, as well as the means to do so at their disposal.