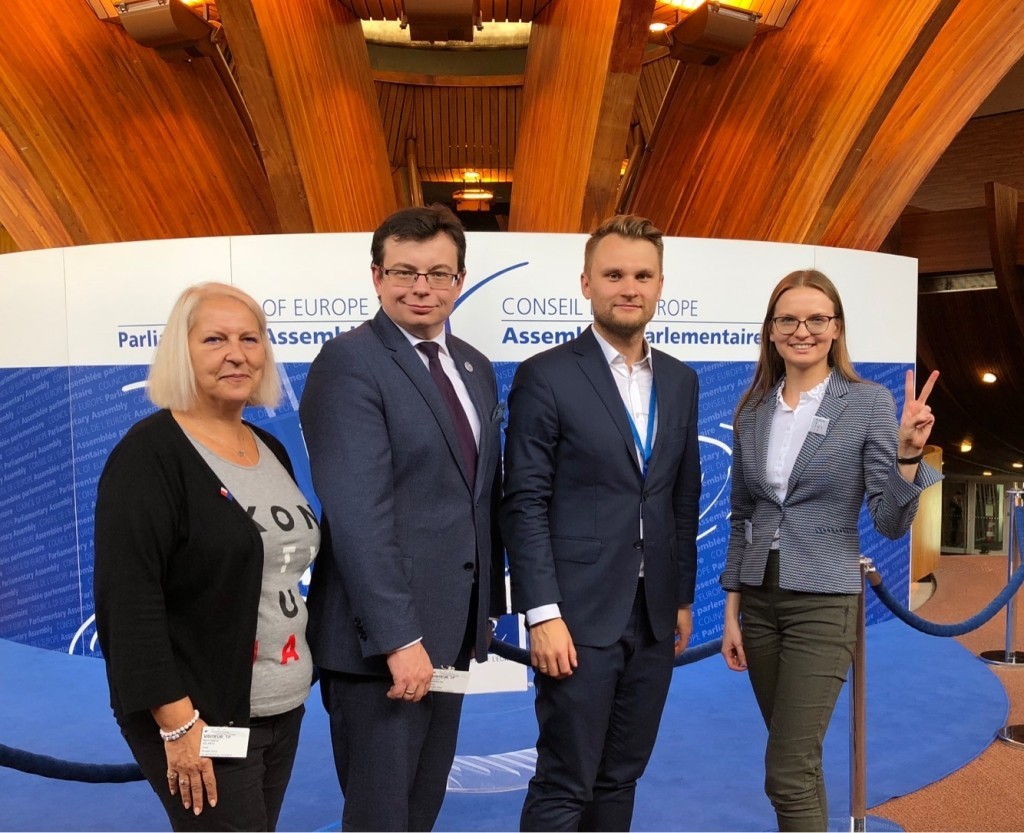 Between Monday 8 and Thursday 11 October 2018, a delegation of the ODF attended the Fourth part-session of the Parliamentary Assembly of the Council of Europe (PACE) in Strasbourg.

This mission was particularly significant, since the President of the ODF, Lyudmyla Kozlovska, who has since August 2018 been subject to a Schengen entry ban issued by Poland, was able to participate thanks to the support of the French authorities.

During the PACE session, Kozlovska was invited as a panelist to two side events.

On Monday 8th, the President of ODF delivered her speech during the side event “The shrinking space for Civil Society and the persecution of Human Rights Activists“, where she raised her case, focusing especially on the worrying precedent that Poland is setting in terms of persecuting civil society activists within the European Union, which was built on the fundamental values of freedom and democracy. She underlined that the ongoing persecution of peaceful protesters in Poland, together with the continued attacks on the rule of law there, make it impossible to continue to refer to the Polish transition as the bright example it used to be. At the event organised by the Conference of INGOs of the Council of Europe and hosted by Olena Sotnyk (Ukraine, ALDE), participated also other human rights defenders and representatives of civil society focusing on human rights abuses in post-Soviet countries.

On Wednesday 10, Kozlovska contributed to the event hosted by German MP Frank Schwabe “Human rights in danger – the dismantling of the rule of law in Poland“. On this occasion, the President of the ODF presented the specific attacks to which the Foundation, as well as many other NGOs, have been subjected by the Polish authorities. In particular she referred to the astonishing amount of “fake news and smear campaigns produced on a daily basis, from Moldova, from Russia, from Kazakhstan” and now also from Poland. “The main purpose of my contribution here is that the impact of the Polish Schengen entry ban imposed against me as a threat to national security, with all documents being labelled as “highly classified”, has at least three dimensions: firstly, it is a message to all those foreigners who could find themselves in the same place as me if they criticise Poland and violations of the Constitution and rule of law; secondly, it has an impact on countries such as Kazakhstan, Moldova and even Ukraine, which suffer from high levels of corruption (…) and c) it is a warning of the inability to defend others who may find themselves in the same position, i.e. banned by Poland or Hungary, because the Schengen system is based on trust and sincere cooperation and this is a clear example of Poland’s violation of trust and cooperation with foreign partners.”

In conclusion, Kozlovska called on the Council of Europe to ensure that “mechanisms be adopted in order to prevent such abuses and protect human rights defenders”.  “Not everyone has the possibility to speak in front of you; this is actually a great privilege for me and I don’t want to speak only about my case but in order to prevent that this occurs again in the future,” she added.

Polish civil rights activist Julie Walecka and lawyer Jaroslaw Kaczynski were also among the panelists. Walecka presented her experience as a regular citizen who felt the urge to become a street activist, after learning in 2015 that the rule of law and the judicial system in her country were being seriously threatened. On behalf of the citizens’ organisation “Civil Guard”, she denounced how peaceful protesters in the streets can be detained purely for carrying symbols such as a white rose or the symbol of the constitution. “We feel that the National Council of the Judiciary is no more the protector of the judiciary against the ambitions of the executive branch,” she warned. Moreover, she raised concerns over the upcoming elections, which are also linked to the erosion of the principle of independence of the judiciary, pointing out that “according to the law, the Supreme Court validates the results of the elections”.

Kaczynski, a lawyer who has been defending many civil rights activists facing persecution as a consequence of their civic engagement, showed the irregularities of police behaviour in the repression of peaceful protests. He highlighted that “everyone whose IDs can be checked is not asked to be a witness, everyone is charged. The most common charges fall under accusations of “distracting traffic on public roads” or “organising an assembly without notification”; some of the assemblies are indeed spontaneous, a right guaranteed by the law on the freedom of assembly and the Polish Constitution.” Judges usually acquit protesters of the offences they face and many judges are themselves protesting against this state of affairs, for which they face disciplinary measures. He then called for support for the independence of the judiciary and for a show of support to judges by inquiring about the individual cases of those who have been unjustly removed from their post or received some retaliatory measures by Polish authorities.

As a result of the ODF’s campaigning and advocacy efforts, 27 Members of the PACE signed a Motion for a resolution entitled “Judges in Poland and in the Republic of Moldova must remain independent”, including Azadeh ROJHAN GUSTAFSSON (Sweden, SOC), Hannah BARDELL (United Kingdom, NR), Doris BARNETT (Germany, SOC), Reina de BRUIJN-WEZEMAN (Netherlands, ALDE), Andreas NICK (Germany, EPP/CD), Joseph O’REILLY (Ireland, EPP/CD), Andrea ORLANDO (Italy, NR), Ulla SANDBÆK (Denmark, UEL). In the Motion, the importance of supporting independent judges is reiterated, by mentioning the individual cases of those “disobedient” judges, such as Igor Tuleya, Wojciech Łączewski, Dominik Czeszkiewicz and Waldemar Żurek in Poland and Domnica Manole in Moldova, who are facing different forms of politically motivated persecution and retaliatory measures for their independent stances.

The Foundation welcomes the tabling of the Motion for a resolution on the “Misuse of the Schengen system by Council of Europe member States as a politically-motivated sanction”, which shows the PACE’s commitment to trying to avoid such cases of abuse as that involving the President of ODF being repeated in the future.

Moreover, two written declarations were tabled regarding the rule of law, democratic standards and the independence of the judiciary in Moldova.

See videos of the ODF at the PACE: