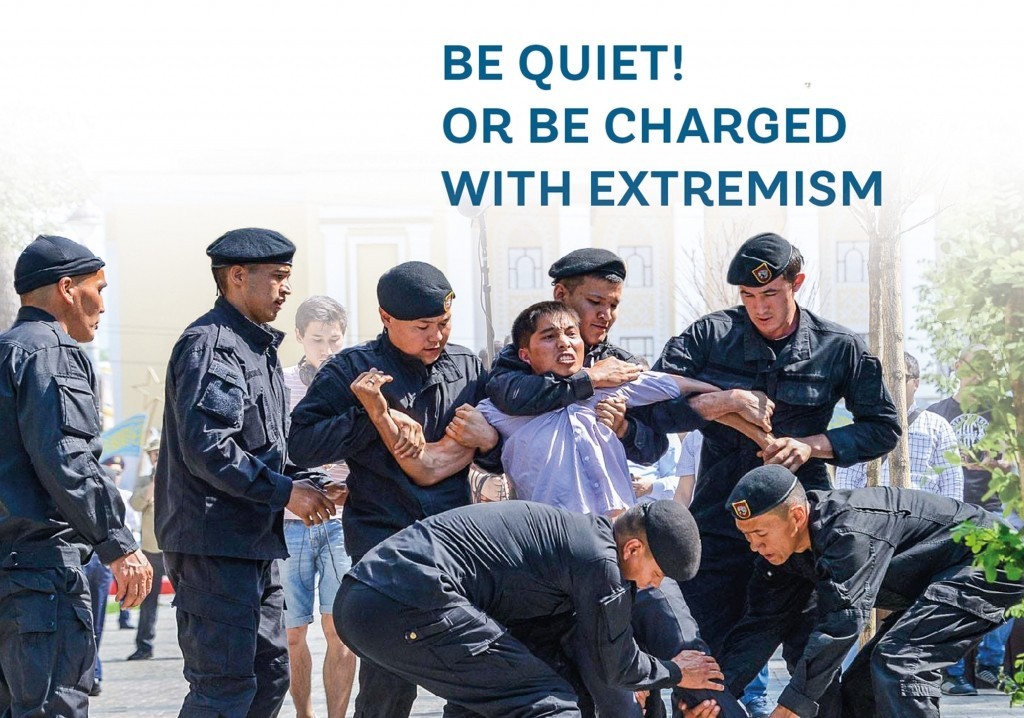 Collective complaint: Be quiet! Or be charged with extremism

From March to October 2018, in Kazakhstan, approx. 450 people were forcefully detained for participating in peaceful rallies. Dozens of people have fallen victim to threats, interrogation and surveillance by law enforcement bodies. More than 30 people have been subjected to criminal responsibility for publishing comments critical of the authorities on social networks. At least 6 accused persons have been subjected to torture and ill-treatment. These persecutions are being carried out on the basis of the decision to ban the opposition movement “Democratic Choice of Kazakhstan”. 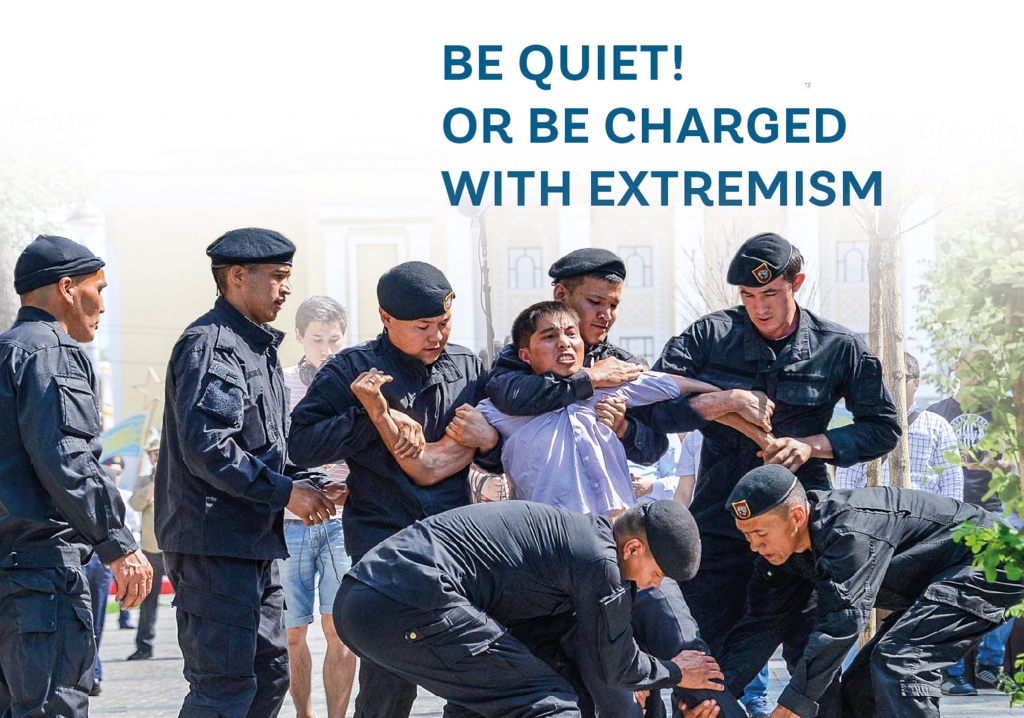 More than 150 people who have fallen victim to these persecutions sent appeals to the Open Dialogue Foundation. Of these, 129 complainants who provided the Foundation with documents and powers of attorney to protect their rights have been included in this report.

Why the authorities of Kazakhstan have banned the peaceful opposition movement and what it means.

The opposition movement “Democratic Choice of Kazakhstan” (DCK) began its activities in April 2017 (The previous DCK movement was banned by a Kazakhstan court on charges of “extremism” in 2005). The DCK set itself the goal of changing the authoritarian Kazakhstani regime through peaceful protests and building a parliamentary republic. The DCK also announced its manifesto, which included social and economic reforms.

The leader of the DCK is the opposition politician Mukhtar Ablyazov. Kazakhstan’s President Nursultan Nazarbayev considers him a personal enemy [The authorities of Kazakhstan have been prosecuting Ablyazov for many years. In December 2016, the French State Council refused to extradite Ablyazov and recognised his case as politically motivated]. The DCK movement spreads information through social networks. According to Ablyazov, a year after the beginning of the activity of the DCK, 32,000 people had joined the organisation, and its subscribers on Instagram totalled more than 180,000, with more than 140,000 on Telegram. The DCK is the only political force in Kazakhstan that calls for a complete change of regime. In response to the growing popularity of the DCK, the authorities launched a massive politically motivated campaign of persecution of activists.

On 13 March 2018, a Kazakhstan court issued a ruling recognising the DCK as an “extremist” organisation and banning its activities in Kazakhstan. The reason for the ban was the accusations of “spreading extremist appeals” through social networks. The court’s decision states that the DCK “incites social discord”, “forms a negative image of the authorities and individual officials”, “provokes protest sentiments” and “stirs up social tensions”.

Referring to the court’s decision, the General Prosecutor’s Office of Kazakhstan declared that individuals would bear criminal responsibility for support and ‘positive approval’ of the ideas of the DCK and its leader Mukhtar Ablyazov, and particularly for: publishing posts in their support on social networks; campaigning and distribution of leaflets; provision of information and other services to Ablyazov and the DCK; and participation in rallies or protest actions organised by the DCK.

How many people signed this complaint

This report is a collective complaint signed by 129 people from 19 cities and towns of Kazakhstan. All of them have been, or continue to be, subjected to politically motivated persecution in connection with the ban on the DCK.

These people sent their forms of appeal and letters of attorney (documents were received from March to October 2018) to the Open Dialogue Foundation. In their powers of attorney, the complainants provided passport details and also provided the Open Dialogue Foundation the right to disseminate information about their case, protect their rights in international organisations and institutions, and also file appeals on their behalf.

In total, the Open Dialogue Foundation received appeals from more than 150 people. However, this complaint includes only the cases of 129; these are people who provided the Foundation with both the forms of appeal and the power of attorney.

How the complainants were persecuted

The methods law enforcement agencies use in pursuing DCK supporters

The police detained peaceful protesters and dragged them along the asphalt. Elderly people, children with their parents, journalists, and random passers-by were brought to the police station. The detainees were not allowed to contact their counsels. Law enforcement officers took phones from the detainees and checked their correspondence on social networks.

In many cases, the detainees were held at the police stations until late at night, they were fingerprinted. The police recorded the numbers of their documents, their family members’ personal data, addresses of residence, and IMEI codes of telephones, which indicates the possible creation of something along the lines of a list of “politically unreliable” citizens.

The basis for detention, interrogation or criminal prosecution is criticism of the authorities and support of opposition ideas. Interrogations at police stations have nothing to do with administrative or criminal proceedings. During interrogations, detainees are asked what their political beliefs are, whether they support the DCK, have read the DCK manifesto, or support President Nazarbayev.

Law enforcement officers forced the detainees to write declarations in which they would “renounce their political convictions”, “refuse to take part in rallies”, and “support the policy of President Nazarbayev”.

A Kazakhstan court sentenced Bakiza Khalelova to a year of restriction of freedom for participating in a peaceful rally, and also banned her from writing comments “aimed at discrediting the activities of the authorities” on social networks.

Thus, at the moment, the main function of Kazakhstan’s law enforcement agencies is not the protection of the rule of law, but rather the protection of the political regime. “Negative assessment of the current government” and “political disobedience” are considered a criminal offence in the decisions of the investigating bodies and the courts.

The international community has reacted to numerous incidents of political persecution in connection with the ban on the DCK. In response, the Kazakhstani regime makes isolated concessions in the cases of individual political prisoners. Still, at the same time, the regime wants to “save face”, and, therefore, forces the accused and their family members to “repent” publicly and support the position of the authorities.

This happened in the cases of torture victims Aset Nurzhaubay and Muratbek Tungishbayev. Nurzhaubay, his mother, and Tungishbayev’s wife, Mira Kaliyeva, made public statements (Nurzhaubay read a text out loud, while Mira Kaliyeva spoke looking at the paper with the text). Following the “repentance”, Nurzhaubay received a suspended sentence. The trial of Tungishbayev is still pending.

The statements by Nurzhaubay and Tungishbayev’s wife have many common theses that mirror the rhetoric of the state propaganda. According to their statements, they “understood” that Ablyazov was “creating for himself the image of an opposition politician before the European community” by “presenting them as political prisoners”. They also said that there was “no benefit” in human rights organisations and international observers who are allegedly “controlled by Ablyazov”.

It is noteworthy that within the framework of the “deal with the investigation bodies”, the authorities demand that the accused pronounce defamatory information regarding human rights defenders. The purpose of these actions is obvious: to signal to others that human rights defenders and international support “will not help” them.

The desperate steps taken by the authorities in the form of fighting human rights defenders and members of observation missions can be explained by the desire to stop initiatives to promote international sanctions for human rights violations.

In different regions of Kazakhstan, mass detentions and criminal prosecutions in DCK cases were carried out with to the same formula. Law enforcement agencies acted synchronously: the same violations were recorded in all cities. Ordinary employees often told activists that they were only “carrying out orders”. Representatives of the National Security Committee, the Ministry of Internal Affairs, the Prosecutor’s Office, and the Local Police Services participated in the detentions and interrogations.

This suggests that the aforementioned actions are being coordinated at the political level by high-ranking state officials: Minister of Internal Affairs Kalmukhanbet Kasymov, General Prosecutor Kairat Kozhamzharov, and Chairman of the National Security Committee Karim Masimov. In doing so, they are carrying out the instructions of the President and report to him. According to Kasimov, “We will work as ordered.”

This report documents numerous incidents of violation. We emphasise the need for the personal responsibility of those who suppress freedom of assembly and association, freedom of opinion, freedom of dissemination of information, and the right to a fair trial and protection from torture in Kazakhstan.