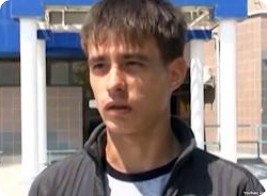 Kazakhstan: assassination of a witness of the Zhanaozen events

On the 7th of October, 2012, in Zhanaozen, a 23-year-old orphan Aleksandr Bozhenko, a witness of the tragic events in Zhanaozen was killed. During the trial of 37 oil workers, heretracted his false testimony and made a statement onthe use of torture. According to the official version, the “crime was solved”; however, members of civil society in Kazakhstan state that a “cleanup operation” has begun, directed at the witnesses of the Zhanaozen tragedy of 2011; who are ‘inconvenient’ for the investigative bodies.

The news of the death of one of the most famous witnesses of the Zhanaozen events was made public only after the speech of the human rights defender Galym Ageleuov at a press conference in Almaty on the 15th of October, 2012. At that time, the human rights activist announced that it was not known exactly when he Aleksandr Bozhenko had died, but it was determined that the orphan had spent several days in intensive care. On the same day in some Kazakh media it was reported that a young man was killed in a drunken brawl at a wedding.

In the press release, issued by the Department of Internal Affairs of Mangistau Province, regarding the case of the murder in Zhanaozen it was announced: On the 10th of July, 2012, at 5:20 a.m., Aleksandr Valeryevich Bozhenko, born on the 22th of January, 1989, in Atyrau, place of residence:  Zhanaozen, ‘Arai-2’ residential district, Street No. 10, house No. 32, was taken by ambulance to the accident and emergency department of the Zhanaozen Central Hospital. The victim was  diagnosed with “closed craniocerebral injury, brain contusion, contused wound in the rightparietal region, 3-level coma”, andhe was admitted to the intensive care unit of in the Zhanaozen Central Hospital. On the 11th of October, at approx. 00:30 A.V. Bozhenko, who never regained consciousness, died in the intensive care unit”.

According to the official version of the investigative body,“Aleksandr Bozhenko’s murder was fully solved”:

The official version of the death of Aleksandr Bozhenko was not accepted by the general public as an accurate one – in the media and on internet forums immediate discussions began, which implied that the elimination of the witnesses of the Zhanaozen events who are unconvenient  to the government, had begun.

Let us recall that the 23-year-old Aleksandr Bozhenko, a child  of an orphanage, became famous after giving evidence at the trial on the ‘case of oil workers’. On the 24th of April, 2012, when testifying in court, Aleksandr Bozhenko retracted his testimony given earlier and made a statement describing the torture he was subjected to: “I wanted to tell you everything. They made me do this. On the 18th of December I was caught, taken to the police, there I was beaten and tortured… The investigator wrote the testimony for me”.

A witness of the Zhanaozen events, Aleksandr Bozhenko was inconvenient and   dangerous to the authorities for several reasons:

The circumstances of the death of Aleksandr Bozhenko cast doubt over the official version of the authorities who claim that hooligans were responsible for the attack. In particular, the following facts raise suspicion:

On the 17th of October, 2012, the day of the funeral of Aleksandr Bozhenko, civil activists held a rally in memory of the deceased in several cities in Kazakhstan and Europe.

According to human rights activist Asel Nurgaziyeva, locals still hold many secrets, which can produce an effect, similar to the reaction to the video footage (the video footage which shows the shooting of civilians during the demonstration in the square in Zhanaozen) of the user under the pseudonym ‘saule540’.  The human rights activist who now represents the rights of relatives of the Zhanaozen people who were shot by the police, believes that the murder of Aleksandr Bozhenko may be just the tip of the iceberg: “Aleksandr could have become a key witness in the forthcoming processes related to the revision of the so-called”case of 37 oil workers”, in which, undoubtedly,the problem of forcing people to give certain testimonies will be raised. And I am sure that this judicial process will be conducted. Even law enforcement officials understand the situation. Some of them are even resigning from their jobs now.”

Civil activists of Kazakhstan are afraid that after the murder of a key witness of the Zhanaozen events, other assassinations may follow. Their fear is based on last year’s events, when in August 2011, the leader of the labour union movement of oil workers, Zhaksylyk Turbayev, and the 18-year-old daughter of an activist of the striking workers, Zhansaule Karabalayeva, were killed, and in autumn 2011 a series of armed attacks were carried out against those who supported the strikers or who were standing in the square in front of the Akimat of Zhanaozen. Journalists of the video portal ‘Stan TV’ who were working on the site, were also severely beaten.

More on this topic:
Aleksander Bozhenko