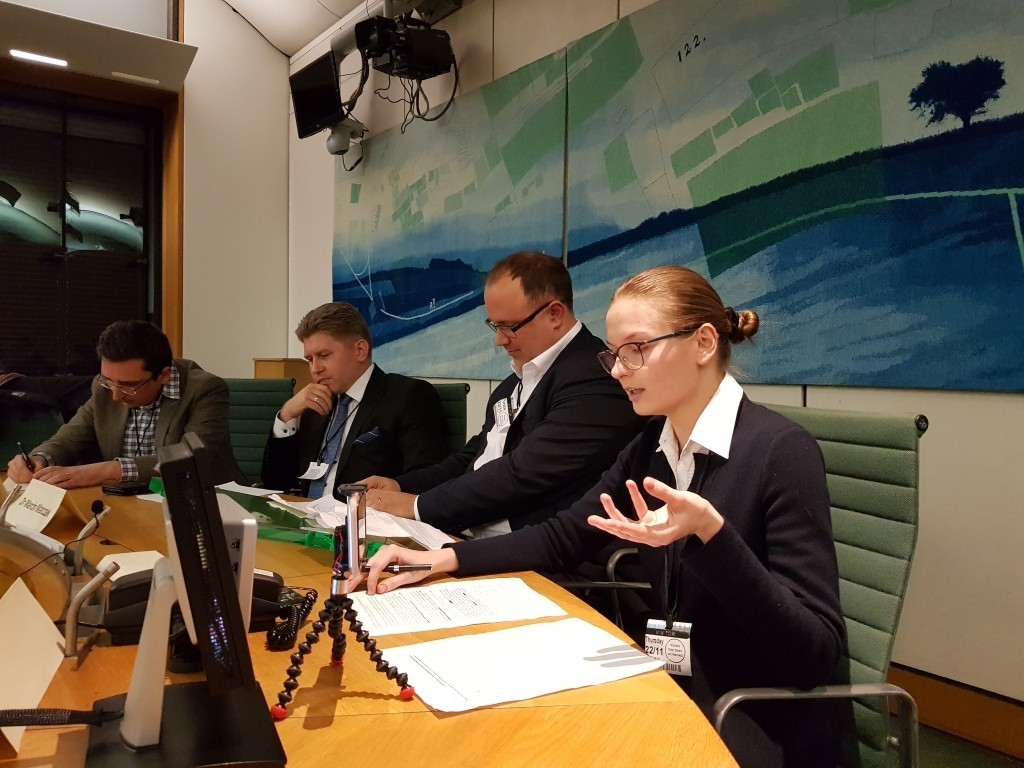 On 22 November 2018, our President Lyudmyla Kozlovska had the honour to speak in the UK House of Commons, at a panel debate on the rule of law in Poland and Hungary organised by the Foreign Policy Centre. Below is a transcript of her opening statement.

First of all, thank you Foreign Policy Centre, and Adam in particular, for inviting me to speak in this esteemed panel, in such a prestigious place.

As a quick introduction, the Open Dialog Foundation is a non-political, non-governmental organisation funded in 2009, whose activities – until recently – focused on supporting democracy, human rights and the rule of law in the post-soviet region. Our aim is to protect oppressed activists, journalists, opposition politicians and other victims of political persecution.

Until July 2017, we have never formally spoken out on the internal situation in Poland. Quite the opposite – we used Poland as a role model and inspiration for its Eastern neighbours and other post-Soviet states struggling for a democratic transformation. The Polish people have shown them great solidarity, with my second homeland often being a safe haven for political refugees.

Sadly, it is not the case anymore – instead of being an inspiration and model to follow, since Law and Justice took power, Poland has been adopting post-Soviet standards of state governance and public life.

As you are well aware, and as was mentioned by prof. Matczak, the ruling party, Law & Justice, started dismantling the constitutional order by quickly seizing control of institutions that should always remain independent from the legislative and executive power. But that was just the beginning.

As a direct victim of Poland’s rule of law abuse I’d like to focus on how Kaczyński’s regime has impacted activists such as myself. Because the escalating assault on the rule of law in Poland is not an abstract issue. It has a very direct, human dimension. According to the latest reports including a periodic summary prepared by Obywatele RP – the Citizens of the Republic of Poland civic movement – there are more than 2,000 ongoing proceedings against peaceful protesters defending the constitution, fighting for women’s rights, or standing up to various radical right-wing and fascist groups in Poland.

The current harassment and repressions of activists have no precedent since the fall of communism in 1989. Over the last months there have been cases of surveillance, seizure of documents or mobile phones and computers taken from NGOs’ offices. A fellow activist, Justyna Butrymowicz, recently had her hand broken by police officers. Unjustified, excessive use of force advances.

My husband and I were among the thousands of people in Poland protesting in defence of the rule of law in July 2017. My husband’s post on possible civil disobedience actions, published at the time on his personal Facebook account, triggered a wave of repression against our organisation, which quickly evolved into hate campaigns from pro-government media and online trolls. What is interesting, up to that point our NGO never had any issues with the authorities, quite the opposite – following an in-depth control by security services we were granted a special permit to export bulletproof vests and helmets to protect protesters at the Revolution of Dignity/Euromaidan in Ukraine. Law and Justice MPs themselves took part in monitoring missions and events organised by our Foundation.

But following my husband’s post, critical of the government, key ministers of the Polish government publicly discussed measures that should be taken against us and other civil society organisations critical of the state authorities. Right-wing commentators and even government officials openly suggested deporting me as a possible measure.

We have been accused of intending to provoke a bloody revolution (so-called Maidan) and planning to overthrow the government in order to achieve the interests of foreign states and actors, among them George Soros, the Russians, the Germans or the so-called “Brussels elites”. State-owned and other pro-government media outlets have been producing new fake news and conspiracy theories about us on a daily basis, very often simply reproducing disinformation purposefully created by the post-Soviet regimes we oppose.

Two consecutive Ministers of Foreign Affairs attempted to censor us and take over control of the Foundation by appointing their commissioners, but the court rejected their pleas, citing the constitutionally guaranteed freedom of speech. Recently, an analogical ruling was made in the case of a prodemocratic opposition movement – Obywatele RP in their dispute with the Minister of Interior.

Despite the allegations in the media and statements of the government officials, no charges have been brought against me, my husband, nor the foundation itself.

Just a few days ago we were informed that a special fiscal and customs control, initiated on the request of the Minister of Foreign Affairs one year ago and extended multiple times, produced no proof of any particular wrongdoing. The authorities, again, haven’t found any illegal activities. They have therefore concluded that our Foundation has to pay a minimum of 700.000 Polish zlotys of unpaid income tax for our numerous human rights and humanitarian aid activities which according to Polish law, as confirmed by our accountants and tax advisors, are tax-exempt. This may set a precedent for a new, highly effective way of persecuting NGOs which the government finds inconvenient.

The final blow against the Foundation – or at least as it was planned – came when I found myself entered into the Schengen Information System with the highest alert level, reserved for terrorism suspects, spies or serious criminals. I was expelled from the EU, with no prior warning and – as leading legal experts have confirmed – in violation of EU law. After 10 years of living in Poland I was separated from my husband, a Polish citizen, and forced to stay for weeks in exile in Kyiv, having to move between random rented rooms and apartments every few days, as I was under constant surveillance and threat from Kazakhstani or Moldovan security services.

Just recently, then-foreign minister Waszczykowski openly admitted, that all the repressions, including my ban, were initiated as a precaution, out of the government’s fear that our Foundation might conduct anti-state activities. He basically admitted to violating the possible reasons for an SIS alert, as laid out in EU law.

Officially, I remain a threat to national security in Poland and should be treated as such by all Schengen member states.

Only thanks to the good will of other EU Member States, starting with Germany, then Belgium, France, the UK and others, all of which have disregarded the ban as groundless, I am able now to stay in Brussels and visit you here today.

I would also like to underline at this point the exceptional role that parliaments and cooperation between their members have played here. It is thanks to the invitations of MEPs like Guy Verhofstadt, Rebecca Harms, Julie Ward and Michał Boni – each from a different political group, that I was able to return to Brussels and speak in the EP. Thanks to national MPs like Frank Schwabe and many who joined him later I was able to speak at the Bundestag and in the Council of Europe. I am sad to say the Polish parliament, which used to play a similar role for those persecuted by post-Soviet regimes, has lost this function since Law and Justice came to power. It used to be a beacon of freedom and democracy for the East, but now the roles have reversed, with Kremlin standards and methods being introduced in Poland.

To conclude – Polish president Andrzej Duda, in his recent speech, said that “the EU is an imaginary community which brings little benefits”, which, sadly, closely resembles the rhetoric and position of the ruler of the Kremlin. Justice Minister and Prosecutor General in one, Zbigniew Ziobro – who just this Tuesday refused to confront commissioner Frans Timmermans in the European Parliament – has questioned the compatibility of EU law with the Polish constitution, striking fear of a “Polexit”. Luckily, no-one in Poland wants to go through the Brexit experience, so this blunder helped convince Poles – 85% of whom are pro-EU – to vote against PiS in the recent local elections.

We believe that the Polish government must not be allowed to disintegrate the EU from within, taking advantage of the SIS to persecute its critics, abusing the trust between member states as well as European laws and values it vowed to uphold.

The populist path towards authoritarianism must be stopped. For now it’s the most involved, active citizens and residents who are the first victims, but anyone can be next.