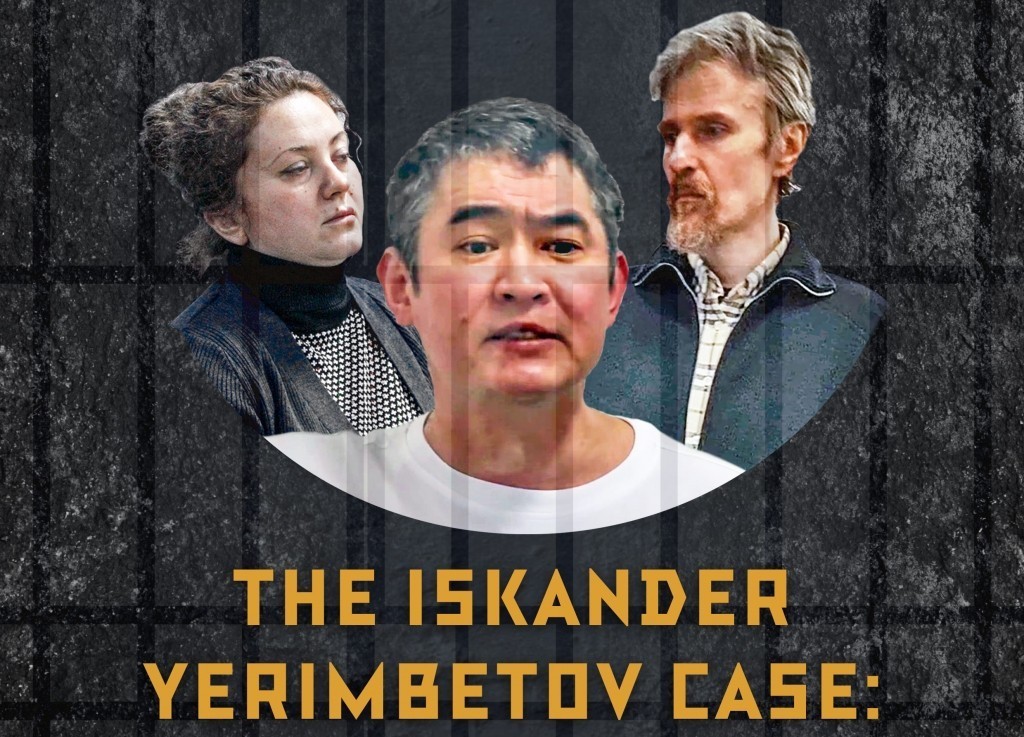 The Iskander Yerimbetov case: The trial of the Kazakhstan regime’s hostage

A high-profile political court trial in relation to the entrepreneur Iskander Yerimbetov and his business colleagues Mikhail Zorov, Dmitriy Pestov and Vasilina Sokolenko has ended in Kazakhstan. All of the defendants were found guilty of “fraud”. According to the prosecution’s account, the private joint-stock company (AO) Sky Service, in which Yerimbetov had invested, was supposedly “unjustifiably” overstating the rate scales for services being offered.

In the meantime, freedom of entrepreneurial activity is guaranteed at the constitutional level in Kazakhstan, including freedom of price formation. The “injured parties” designated by the investigation had not advanced any claims whatsoever against Sky Service. The company had been selling its services at open state tenders. The winner of the tenders became the participant with the most suitable price for the services.

The Italian Federation for Human Rights (FIDU) organised a human rights observer mission to Kazakhstan. A series of meetings with activists, human rights defenders, relatives of political prisoners, and former prisoners who had been subjected to torture, was conducted in the course of the mission. Likewise, the mission participants attended court trials in relation to persons charged for political motives: those of Iskander Yerimbetov, Aset Nurzhaubay, Aygul Akberdiyeva, Aset Abishev, Ainura Ashim, Bakiza Khalelova Ablovas Dzhumayev, Almat Jumagulov and Kenzhebek Abishev.

The mission began its work in June 2018 and is continuing to conduct monitoring of court trials. The Open Dialogue Foundation is cooperating with the FIDU observers and is using the materials and observations gathered by them in its reports. The Open Dialogue Foundation and the Italian Federation for Human Rights are working on preparing a comprehensive report based on the results of the observations of politically motivated trials in Kazakhstan.

This joint report of the Italian Federation for Human Rights and the Open Dialogue Foundation was prepared based on the results of the mission.

Iskander Yerimbetov is the brother of the human rights defender and lawyer Botagoz Jardemalie. She had been furnishing legal consultations to the opposition politician Mukhtar Ablyazov and other persons being prosecuted for political motives in Kazakhstan.

In 2013, Kazakhstan began prosecute Jardemalie within the framework of Ablyazov’s case. In October 2013, the authorities of Belgium granted Jardemalie political asylum. Interpol removed Jardemalie (in 2016) and Ablyazov (in 2017) from its wanted list in connection with the political character of the charges. Kazakhstan organised surveillance of Jardemalie and was likely involved in an attempt to kidnap her. The Belgian police are conducting an inquest into the available facts.

In order to force Botagoz Jardemalie to return to Kazakhstan and “cooperate with the investigation” in the case against Ablyazov, the authorities subjected her brother Iskander Yerimbetov to criminal prosecution. Mikhail Zorov, Dmitriy Pestov, and Vasilina Sokolenko became random victims in the war that Kazakhstan’s authorities are waging against Ablyazov and his supporters.

As long as there’s a person, a charge will be found

At first, all the defendants were charged with being involved in a “criminal conspiracy” with the opposition politician Mukhtar Ablyazov. It was being demanded of Iskander Yerimbetov that he provide false testimony against the sister and the opponent. However, after he had refused to commit perjury and give false evidence, and no ties between Yerimbetov and Ablyazov had been established, the investigation completely changed the charges to ones not connected with Ablyazov’s case.

At the court trial, the judge prohibited any mention about the opposition politician and Yerimbetov’s sister – Botagoz Jardemalie. At the last court session, the judge yelled at Yerimbetov and interrupted him, inasmuch as the latter was making mention of torture, Ablyazov, and Jardemalie.

Iskander Yerimbetov and his parents reported on numerous occasions about torture being used on him with the objective of getting testimony advantageous for the investigation. Yerimbetov was detained on 13 November 2017; however, it was only on 1 February 2018 that independent human rights defenders were first allowed to visit him. This took place thanks to a request to the government of Kazakhstan by the UN Special Rapporteur on Torture Nils Melzer The monitoring group noted that the arrestee was in a poor mental state and looked ill. The human rights defenders noted that Yerimbetov had been examined by doctors for the first time only on 11 January 2018, that is after more than a month had gone by since the first reports about torture.

Besides that, in February 2018, Iskander Yerimbetov was examined by the independent psychologist Svetlana Chernikova. She came to the conclusion that Yerimbetov’s psychological evaluation data bear witness to torture endured and to treatment demeaning to human dignity.

Ignoring the demands of the international community, Kazakhstan’s authorities refused to conduct an inquest into the facts of torture in relation to Yerimbetov. On 22 February 2018 the investigation with respect to the report on the use of torture on Iskander Yerimbetov was terminated in connection with the “absence of the event of a crime”. In the meantime, a multitude of bodily injuries had been discovered on Yerimbetov’s body in the course of the medical expert examination; however, the authorities declared that they had appeared from Iskander having “bumped into a nightstand and a bed”. The investigation about the torture was conducted by special prosecutor Almas Dunbayev, who before this had been a part of the inter-agency operative-investigative group. Dunbayev did not question Yerimbetov about the torture even once during the investigation. The investigation’s conclusion cannot be considered objective, inasmuch as an obvious conflict of interests existed.

During investigation the defendants Dmitriy Pestov and Vasilina Sokolenko admitted their guilt and gave false testimony against Iskander Yerimbetov. However, at the trial, they declared that the investigators had been exerting pressure on them, inclining them toward self-denunciation. They repudiated their previous testimony, and likewise declared that they do not admit guilt of the crime being inculpated to them.

An unprecedented quantity of violations at the court trial

The observers bring attention not only to the fabrication of the charges, but likewise to their absurdity. Factually, what Yerimbetov was charged with was that an enterprise in which he had invested had gotten benefit from entrepreneurial activity. Representatives of the prosecution could not explain in court what “unjustified overstatement of rate scales” is as applies to a private commercial enterprise and what norms of the Criminal Code had been violated by the suspects. In the meantime, a necessary condition for a fair trial is clarity of charges.

The Kazakhstani and international human rights advocates were shocked by the quantity of violations at the court trial in Yerimbetov’s case. The trial had an obvious accusatory bias. Yerimbetov was deprived of the right to communicate with his lawyers before court sessions. During the trial, he was being kept in a special “aquarium”, which separated him from his lawyers and the other participants in the trial. The judge denied or did not consider key petitions from the defence, ignored reports of torture, while he demonstrated an interest in the gathering of evidence in favour of the prosecution’s position.

In order to speed up the examination of the case, Yerimbetov and the other accused were forcibly delivered to court even in a period of illness. The defendants and their defenders were not allowed to express their position in a reasoned manner and in full. The judge systematically interrupted them or terminated their speeches. The judge did not allow Dmitriy Pestov to appear with a last word at all. The penultimate session of the trial lasted 15 hours and nearly without breaks.

The latest threat to Kazakhstan lawyers

The incident of the prosecution of Botagoz Jardemalie and her brother Iskander Yerimbetov is a vivid example of the kind of risks that Kazakhstan lawyers encounter, and how far Kazakhstan’s authorities are capable of going in their aspiration to crack down on those of them who have fallen out of favour.

In Kazakhstan, lawyers systematically face threats, intimidation, surveillance and other kinds of pressure. This especially concerns those who enter into the defence of those who are charged for political reasons. At the present moment, there are only a few lawyers in Kazakhstan who dare to participate in politically motivated cases.

Kazakhstan’s lawyers risk being deprived of their profession or being subjected to prosecution if they take a position of principle in standing up for a client’s interests. Kazakhstan’s authorities find ways to persecute even those lawyers who have been forced to leave the country.

Business is in danger in Kazakhstan

In October 2018, President Nursultan Nazarbayev took part in the “Asia-Europe” (ASEM) Forum. During a meeting with entrepreneurs from the whole world, Nazarbayev called on them to do business in Kazakhstan. “We will do everything possible for you to come to Kazakhstan, to put in and earn your money and help Kazakhstan develop industry and the economy,” declared the president of Kazakhstan.

In the international rating DoingBusiness-2019, Kazakhstan took 28th place out of 190 countries of the world, having risen in the rating by 8 points in comparison with the previous year. However, the rating does not take into account the level of corruption and the level to which business is protected from lawless interference in its activity by state organs.

Iskander Yerimbetov’s case sends an alarming signal to international investors, inasmuch as it shows how business is not protected in actuality in Kazakhstan. It follows from the essence of the charges brought against Yerimbetov that obtained profit is “stolen”, while competitive entrepreneurship is “fraud”. There is no independent judiciary and rule of law does not function in Kazakhstan. Any investor can end up in Iskander Yerimbetov’s place if the authorities decide to prosecute him for any political reasons.