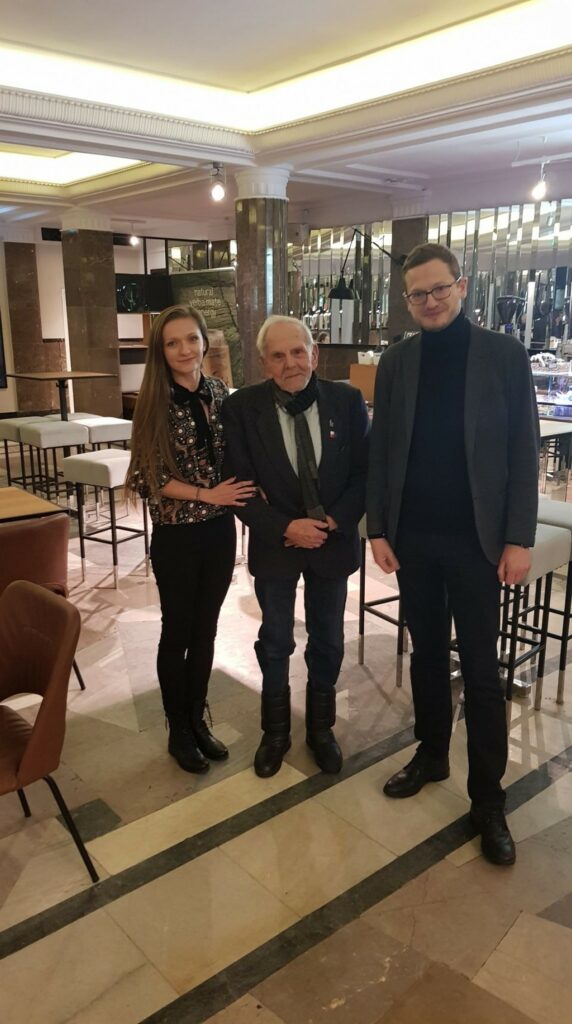 Last weekend, the co-funder of Russie-Libertés and a human rights defender – Alex Prokopiev, visited Warsaw. On that occasion, he met the representatives of Polish civil society and took part in a weekly pacific protest held by street opposition activists in defense of the Constitution.

Alexis Prokopiev, Russian by birth, moved with his parents to France at the age of twelve. However, Russia, with its Putin driven policy, became one of the main principles of Alexis’ work as a human rights defender and a democrat. Therefore, after falsified elections in Russia in 2011, he co-funded Russie-Libertés – a Paris born NGO to support democracy in Russian Federation. The NGO conducted multiple campaigns supported by countless petitions, signatures, and political help for those Russian activists who were either in detention or in prison due to their resistance to Kremlin’s regime. Russie-Libertés also helped the refugees from Russia, particularly after the arrests of its members altogether with enlisting one of R-L activist to Interpol’s Red Alert. On this basis, he was detained in Bulgarian prison, and after three months the organization was able to bring the man to France.

One of the Polish society activists of a democratic movement was Bogusław Stanisławski, the co-funder of Amnesty International Poland and a former member of „Solidarność”. The aim of this meeting was to talk about the future of Europe, to try to find common points in how we – in Poland and France, defend human rights, the rule of law and the democracy. Both, Alexis and Mr Stanisławski, as human rights defenders, are experienced in monitoring the elections – Mr Prokopiev in Russia and Mr Stanisławski in Ukraine before the Orange Revolution. Both agreed, that to maintain democratic states and European Union as a common good to all its members, the nations have to defend the values of unity, cooperation and trust. The politic parties have to come with good programs to give the citizens a new hope and to create a new, positive and desirable way to future.

The role of civil society was also discussed as a perpendicular tool to guarantee a fruitful and election-winning way of cooperation between political parties and citizens. Asked what needs to be done to win the 2019 parliamentary elections in Poland Bogusław Stanisławski answered that people in the province and villages should be visited and listened to, their expectations need to be collected and taken into consideration. Also, these people need to be sure that their needs shall be supported by politicians not only during the campaign but mainly in the parliamentary works after the elections. Here, Mr Stanisławski mentioned a new, civic initiative – the Congress of Civic Democratic Movements (KORD), as a bridge between civil society and political party: to inform, support and equip the parties in knowledge they themselves may lack in working on programs for future nation development also as an EU member.

European Union, as a common good for all member states, was also a topic of the meeting. Both, Mr Prokopiev and Mr Stanisławski, expressed opinions like:

Polish changes in judiciary – especially the step back taken recently by Law and Justice concerning the Bill on the Supreme Court was one of the matters raised by Alexis Prokopiev. Mr Stanisławski expressed his opinion, that a partial withdrawal from the dismantling of the Supreme Court might have been the result of civic protests, the activities of the street opposition and, especially, the „cameleon effect” of those in total power in todays Poland, and the positive pressure from the EU. In this place, the men discussed the situation in Polish media that Law and Justice tends to nationalize and make them their propaganda tool to keep the society in lie and disinformation. Mr Stanisławski underlined the fact, that the fight for Polish independent media is yet to come.

As mentioned before, Alexis Prokopiev was a guest at a protest held in front of the Namiestnikowski Palace – the residence of the sitting President of Poland, Andrzej Duda. There, he had the opportunity to meet many activists of the street opposition altogether with Mateusz Kijowski – a former leader of the Commitee for the Defence of Democracy, who initiated the movement of Poles critical about the adverse activities of the Polish, self-ruling government of Law and Justice party post 2015 elections. The activists explained the idea of a weekly protest taking place since April 2017: to remind the President that he is obliged to fulfill the Constitution of the Republic of Poland (according to article 130 of the Constitution) which he is constantly breaking having been strongly attached to his former party (Law and Justice) which violates article 126 of Constitution. The activists make this protest pro-European which highlights the fact that being an EU member state, Poland – and its representatives including the President, must respect the international treaties. The latest project of a presidential bill on national treaties clearly states that Poland may neglect the agreements if they do not correspond with the policy line of the government.

Later, during the reading intitled „Feminism not fascism” in the Powszechny Theatre, Alexis Prokopiev had the opportunity to briefly talk to Joanna Scheuring-Wielgus – an MP of Teraz party. The main topic of the conversation was next year’s EU elections and the state of the parliamentarism in Poland. Ms Scheuring-Wielgus underlined that her newly-born party, which she started only that day, was supposed to be a bridge between politicians and civil society which needs to be listened to and have a clearly stated field of cooperation with political parties in creating state policy.

Another point of Alexis Prokopiev’s visit to Poland was a documentary by Konrad Szołajski „The good change” (oryg. „Dobra zmiana”) that was part of the Watch Dogs Festival – an event devoted to human rights. The documentary shows how the lives of two women supporting both sides of the political scene have changed since 2015 parliamentary elections in Poland. One of them is a strong backer of Law and Justice party; she is a member of the Shooters of the Republic of Poland – a quasi-formal military group – teaching her children and grandchildren how to strip a Kalashnikov with covered eyes and what to do to survive long days in the middle of nowhere. The second, a regular housewife, gets involved in the anti-government protests and devotes all her time to street opposition in order to point the Polish society that the way of Law and Justice ruling is highly harmful not only to Poland but also to the European Union. Mr Prokopiev was deeply shocked realizing how vivid the differences between the two women were – one kept in a blind belief in the infallibility of the government and focused on her relatives; the other working hard for future social benefits and national stability of the whole country.

The last meeting Alexis Prokopiev participated in was the visit to the Town of Freedom – a civic picket in front of the Parliament. Maciej Bajkowski – the host of the picket welcomed Mr Prokopiev and spoke about his thousand and six days of constant round-the-clock protest, the problems he encountered in that time, the phisical attacks he fell victim to and the difficulties he needs to face to keep the picket last. Andrzej Majdan of Video-KOD – a network of civil television – was also present during that meeting who, in turn, spoke about the development of this civic media and the importance it has had in delivering a first-hand broadcast of the most shocking events concerning the street protest that would never be shown in public television, not to mention Polish national tv that has become a tube of propaganda in favor of the ruling party. Mr Majdan also spoke about the attacks on free and independent media in Poland that started immediately after 2015 elections. He highlighted that the rights of media representatives are often violated in illegal attempt to silence all these who still have the courage to show the truth so adverse to what Law and Justice party would like to create not only for its part of electorate but also Europe and the whole world.