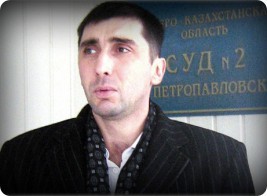 The Board of Appeals of the Zhambyl Regional Court overturned the acquittal of Kazakh human rights defender Vadim Kuramshin. On the 31st of October, 2012, he was arrested. Supporters of the human rights activist reported that while he was remanded in custody, Vadim Kuramshin attempted suicide. After the incident, he was transferred to the prison in the town of Taraz.

Vadim Kuramshin’s prosecution began on the 23rd of January, 2012. He was arrested on charges of extortion. According to the human rights activist and his allies, the case was entirely fabricated. After a trial, on the 28th of August, 2012, a jury found Vadim Kuramshin not guilty of the charges. The charge was reclassified from ‘extortion’ to ‘arbitrariness’. The court sentenced Kuramshin to 1 year in prison, but, taking into consideration that the human rights defender had been under arrest for more than six months, the judge decided to release him right out of the courtroom. This court’s decision came as a surprise to many, as the public prosecution requested a sentence of 14 years in prison for the defendant.

After his release, Vadim Kuramshin got engaged in human rights work again. Mainly, drew attention to the problem of human rights violations in Kazakh prisons. Most experts and human rights activists link up the current arrest with Kuramshin’s criticism of severe torture in prisons of Kazakhstan. The critical words were uttered by him at the Annual Meeting of the OSCE Human Dimension Implementation, held in Warsaw between the 27th of September, 2012 and the 4th of October, 2012. Even during the conference, Ambassador at Large (for relations with international organisations) of the MFA of the Republic of Kazakhstan, Usen Suleiman, hastened to assure participants of the OSCE conference that human rights activist Kuramshin would not face arrest for his speeches in Warsaw.

However, soon after the prosecutor’s office of the town filed an appeal against the verdict of the court of first instance, on the 31st of October, 2012, the Board of Appeals of the Zhambyl Regional Court granted the protest and decided to overturn the acquittal of Vadim Kuramshin. At the same time, the court decided to change the preventive measure and to take Kuramshin into custody; he had been earlier released under a written pledge not to leave the town. The formal reason for his arrest was a violation of the conditions of his recognisance not to leave the town; as previously mentioned, after his release, he traveled to Warsaw to attend the OSCE.

As the judgment of the court to arrest Vadim Kuramshin was being read out, a police squad was already waiting near his house. In the opinion of the human rights activist, this indicates that the security services were aware of the decision of the court in advance. “The Court has not yet issued a decision, and the security services in civilian clothes, but with radios, were already standing outside my door. I expect that the verdict will be canceled, “- said Vadim Kuramshin to reporters by phone a few hours before his arrest.

Vadim Kuramshin’s detention took place late in the evening on the 31st of October, 2012. As the human rights activist refused to open the door to special services until the next morning, his apartment was stormed.

Razia Nurmasheva, Vadim Kuramshin’s counsel, commented on the decision of the appealate court to the mass media as follows: “This means that VadimKuramshin’scaseshould be considered anew; there should bea completely newcomposition of the courtof first instance.If the court will be a jury trial, then, there has to be a new jury”.

Meanwhile, Vadim Kuramshin’s supporters reported that after the arrest of the human rights activist, he suffered a battery.In protest againstsuch treatment,he cuthis wrists. The incident took place on the 1st of November, 2012. After the incident, Vadim Kuramshin was transferred to the prison in Taraz.