Search
The Open Dialogue FoundationNewsNew tools to defend human rights worldwide: The Global Magnitsky Act and its application in the European context

Upon the initiative of Italian Senator Roberto Rampi, the Italian Federation for Human Rights, Open Dialogue Foundation, the Nonviolent Radical Party, Transnational and Transparty and the EU-Russian Expert Group on Combating Transborder Corruption are pleased to invite you to an on the application of the Magnitsky law, on March 28, 2019, from 10:00 to 13:00, in the Sala ISMA (Piazza Capranica, 72 – Rome), at the premises of the Italian Senate. 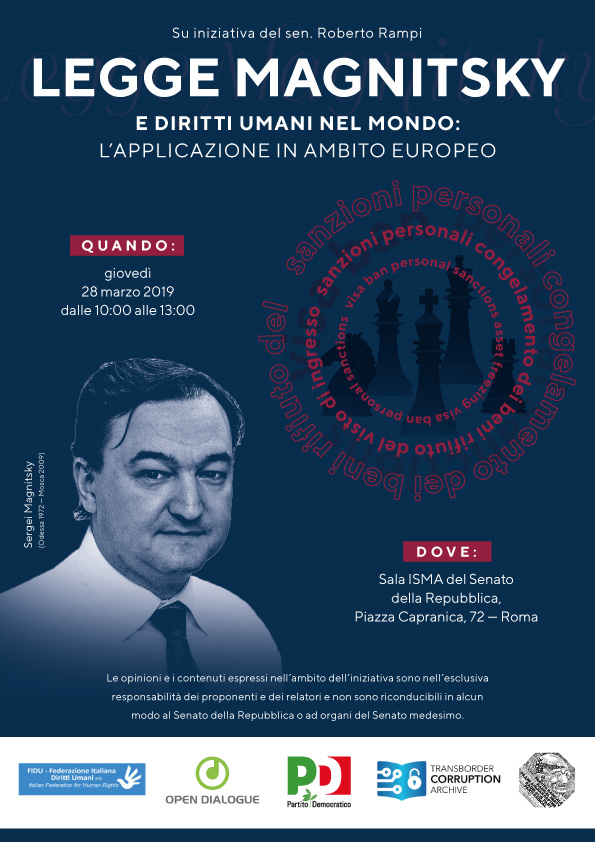 The Magnitsky law takes its name from the Russian anti-corruption lawyer Sergei Magnitsky, who between 2007-2008 exposed a major fiscal fraud involving high ranking authorities, police, judges, fiscal authorities, bankers and organised crime groups. After exposing such facts he was arrested and, after eleven months of detention in harsh conditions and without a trial, he died under suspicious circumstances in a Moscow prison, at 37, in November 2009. Magnitsky’s client, American entrepreneur Bill Browder, thus launched a campaign to impose targeted sanctions against all officials involved, aiming to prevent them from entering the USA and exclude them from the US economic and financial system.

In addition to Canada, several EU member states have also adopted the Global Magnitsky Act following the example of the United States, such as the United Kingdom, Estonia, Latvia, Lithuania and the Netherlands. Moreover, the European Parliament and the Council of Europe have carried out effective steps to promote the Magnitsky law.

This event aims to present the features of this diplomatic model and its concrete application in the countries where it has already been adopted, with the aim of supporting its implementation in the Italian and European context. The first part of the seminar will be devoted to the analysis of the implementation of the legislation at international, European and national levels, and its connection with human rights. The second part will be dedicated to assessing the Magnitsky law’s effectiveness in other contexts where the law is already in force, and its possible transposition into the Italian legal system. The speakers will include human rights defenders, Magnitsky law campaigners, NGO representatives and victims of human rights abuses fighting impunity in non-democratic countries such as Russia, Venezuela, Azerbaijan, Kazakhstan, Moldova and others.