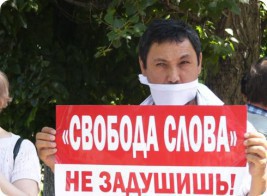 Statement on the shutdown of independent media organisations in Kazakhstan

A number of independent media organisations and opposition NGOs of Kazakhstan are under the threat of closure and prohibition of activities in the country. The Prosecutor’s Office in Almaty filed a motion in court, demanding that these organisations be deemed as extremist.

On the 20th of November, 2012, the Prosecutor’s Office in Almaty filed lawsuits and claims regarding the associations ‘Khalyk Maidany’ and ‘Alga’, as well as the media organisations: the newspapers ‘Respublika’ and ‘Vzglyad’, the ‘K +’ TV channel and the ‘Stan.tv’ Internet video portal. Prosecutors requested that these organisations be recognised as extremist and their activities be prohibited on the territory of Kazakhstan.

These actions taken by the Kazakh Prosecutor’s Office are connected with the fact that on the 19th of November, 2012, the verdict against Vladimir Kozlov, Serik Sapargali and Akzhanat Aminov came into force. The court judgement laid out that the activities of several unregistered civil associations and of some media organisations during the Zhanaozen events in 2011 were of an extremist nature. This trial was harshly criticised by the international community due to its clear political nature.

The newspapers ‘Golos Respubliki’ and ‘Vzglyad’ made ​​an attempt to refute the charges brought against them by filing an appeal as a third party against the trial court’s decision, but the court refused to hear the complaints.

It should be noted that the Prosecutor’s Office’s claims were filed on the eve of consideration of a new agreement on partnership and cooperation between the EU and Kazakhstan in the European Parliament.

Taking into consideration the rapid deterioration of the situation around political and civil rights in the Republic of Kazakhstan, the Open Dialog Foundation considers the signing of a new agreement between the EU and Kazakhstan unacceptable at the moment.

We hereby appeal to the European Parliament to postpone the vote on the resolution, which contains recommendations to the European Commission regarding the Agreement on Partnership and Cooperation between the EU and Kazakhstan. We also urge the EU to conduct close monitoring of this subject.

We hereby call on international human rights organisations and the governments of democratic countries to express their official position on the matter. We hope that together we will be able to stop this new wave of pressure on civil and human rights in Central Asia.