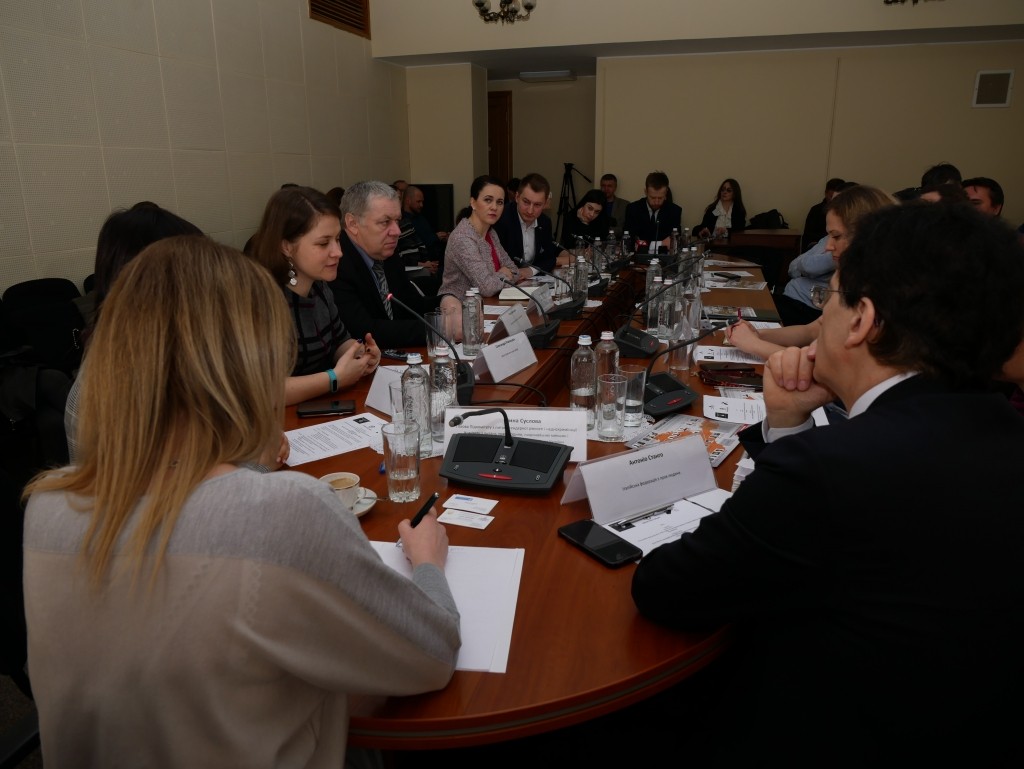 “Persecution and violation of the rights of Ukrainian citizens on the territory of Russia, Belarus and Kazakhstan” – a round table in the Verkhovna Rada of Ukraine

On 18 March 2019, in the Verkhovna Rada of Ukraine a round table took place on the subject of “Persecution and violation of the rights of Ukrainian citizens on the territory of Russia, Belarus and Kazakhstan.”

The event was held on the initiative of the Italian Federation of Human Rights (FIDU) and the Open Dialog Foundation and with the support of the parliamentary committee on Human Rights, national minorities and international relations.

Human rights activists initiated a discussion on this problem after the events of 14 February 2019 when two Ukrainian citizens, official observers of the FIDU mission – Lyudmyla Voloshyna and Valeriy Yavtushenko – were abducted and expelled from Kazakhstan.

At the beginning of the meeting, the commissar of the commission and deputy of the Verkhovna Rada of Ukraine, Iryna Suslova, approached the audience with a welcome speech. She emphasized that the residing abroad Ukrainians face huge challenges. And that is why Suslova considers the subject of the round table extremely important, because only in cooperation with international organizations and partners, and thanks to an appropriate response, Ukraine can protect the rights of its citizens.

Next, the human rights activist and the FIDU mission coordinator, Natalia Panchenko, spoke out, who noticed that the recent case of deportation of Ukrainian observers from Kazakhstan is not an isolated one, but is a systematic problem of an attitude towards Ukrainian citizens in post-Soviet countries. There are examples from Russia and Belarus, countries with the highest risk, in which Ukrainians were detained, illegally sentenced and imprisoned. In Kazakhstan, groundless detentions and deportations of Ukrainians are also becoming more and more frequent.

For example, in September 2018, Ukrainian journalist Oleksandr Horokhovski, who, at the invitation of his colleagues underwent training on the territory of Kazakhstan, was arrested and expelled. Six months later, the situation with Lyudmyla Voloshyna and Valeriy Yavtushenko was supplemented by an abduction. Therefore, it is necessary to recognize the violation of Ukrainians’ rights in these countries as a systemic problem and to contribute to its solution, because it is a problem not only of two specific people, but also of Ukrainian-Kazakh relations in general. And if today the necessary decisions are not taken at the state level, then further visits of Ukrainians in Kazakhstan may become even more dangerous.

MPs, representatives of the Ukrainian Ministry of Foreign Affairs, journalists, human rights defenders, social activists and relatives of Ukrainian political prisoners who are illegally detained on Russian territory took part in the discussion. The Kazakh ambassador to Ukraine, Samat Ordabayev, did not appear at the event despite the invitation from the organizers and deputies.

The first thematic block of the round table discussed the question of the abduction and illegal imprisonment of Ukrainian citizens on the territory of Russia and Belarus.

The representative of the organization “Association of the relatives of the political prisoners of the Kremlin” Pеtrо Wyhivski, father of Valentyn Vyhivski accused of espionage (article 276 of the Penal Code) and convicted in the Russian Federation for 11 years of imprisonment, actually staying in a strictly secured colony, told about his son’s situation. Valentyn was detained in Simferopol, then sent to Moscow, and from there to the detention centre of Lefortovo, where he has been serving a sentence for 4,5 years now. He was often beaten, tortured and the possibility of contact with him is very limited.

Oleksandra Romantsova from the Center for Civil Liberties noted that since 2014 on the territory of Belarus, Russia and the territories occupied by it (Crimea and Donbass), there is a tendency to abductions and detaining citizens of Ukraine as hostages. This was demonstrated for the first time during the arrest of Oleg Sentsov, Oleksandr Kolchenko, Oleksiy Chirniy and Gennadiy Afanasyev and following accusation of extremism, terrorism and spy activity in the territory of the occupied Crimea.

Russia has a well-developed prison system, so Ukrainian citizens are usually sent as far as possible – to Ural and Siberia.

As of today, there are 73 politically motivated cases of detention, one of which is a whole fresh matter. 19-year-old Pavlo Hryb was arrested in Belarus and found in prison in the territory of Krasnodar Krai three days later. The trial takes place in Rostov-on-Don. Hryb is subjected to psychological and physical pressure.

87 percent of cases of arrests of Ukrainian citizens in Russia are accompanied by torture.

The second thematic block was devoted to the problem of abductions of Ukrainian citizens on the territory of Kazakhstan.

At the beginning of this part of the event, Lyudmyla Voloshyna talked about the circumstances of abduction of her and Valeriy and a number of violations committed against them: abduction, confiscation of telephone calls, fabricated administrative case, refusal to meet with the consul and contact a lawyer, night trials without lawyers and false evidence, immediate expulsion contrary to the period of 5 days prescribed by the court.

Lyudmyla Voloshyna called for a definite reaction from the Ukrainian side that such treatment of Ukrainians would not become the norm, that a politically motivated expulsion would not remain a mere administrative violation and that the international missions which the citizens of Kazakhstan need, are not compromised.

“In connection with the incident in Kazakhstan – we counted on cooperation with the authorities of Kazakhstan, but they acted in an unacceptable format. We monitor the situation with human rights not to harm the national government, but to support human rights. We were already in Kazakhstan with representatives of the authorities of other countries – Italy, Switzerland, Poland  so the mission will be continued in cooperation with members of the Ukrainian government“- said Antonio Stango, the president of FIDU.

Vasyl Kyrylych, deputy director of the consular service department of the Ministry of Foreign Affairs of Ukraine, said in his speech that the Ukrainian Foreign Ministry is controlling the illegal deportation of Ukrainian citizens from Kazakhstan. In connection with the current situation, the Embassy of Ukraine in Kazakhstan sent a note to the Ministry of Foreign Affairs of the Republic of Kazakhstan asking why the consul’s mission was not carried out in accordance with international regulatory documents. The consul held meetings in the Ministry of Foreign Affairs, in particular in the department of consular service, and the Ukrainian ambassador in Kazakhstan met with the deputy minister of foreign affairs of Kazakhstan and the director of the department, which coordinates the work of the Ukrainian embassy. In all cases, the Kazakh side regretted this incident and stressed that the attention of the relevant authorities of the country to similar violations of the rules and norms of international documents regulating the rights of consular officials would be paid.

“The dialogue related to this issue is not limited to the meetings we have held. The detentions and expulsions of citizens is indeed a systemic phenomenon, which will be the subject of bilateral talks,” emphasized Vasyl Kyrylych, at the same time recommending caution to Ukrainian citizens in a foreign country.

Ukrainian deputy Yehor Sobolev, who for his part also sent letters to Kazakh officials regarding the abduction of Ukrainian citizens, called together with the Ministry of Foreign Affairs to consistently defend the rights of its citizens. He stressed the need to conduct diplomatic negotiations with the Kazakh authorities, arguing that such stories are unacceptable because they cast a shadow over bilateral relations, which should only be strengthened.

“Ukraine is to set an example for other countries in this struggle and at the same time a model of respect for human rights, so that our arguments will have even more power,” he stressed in his speech.