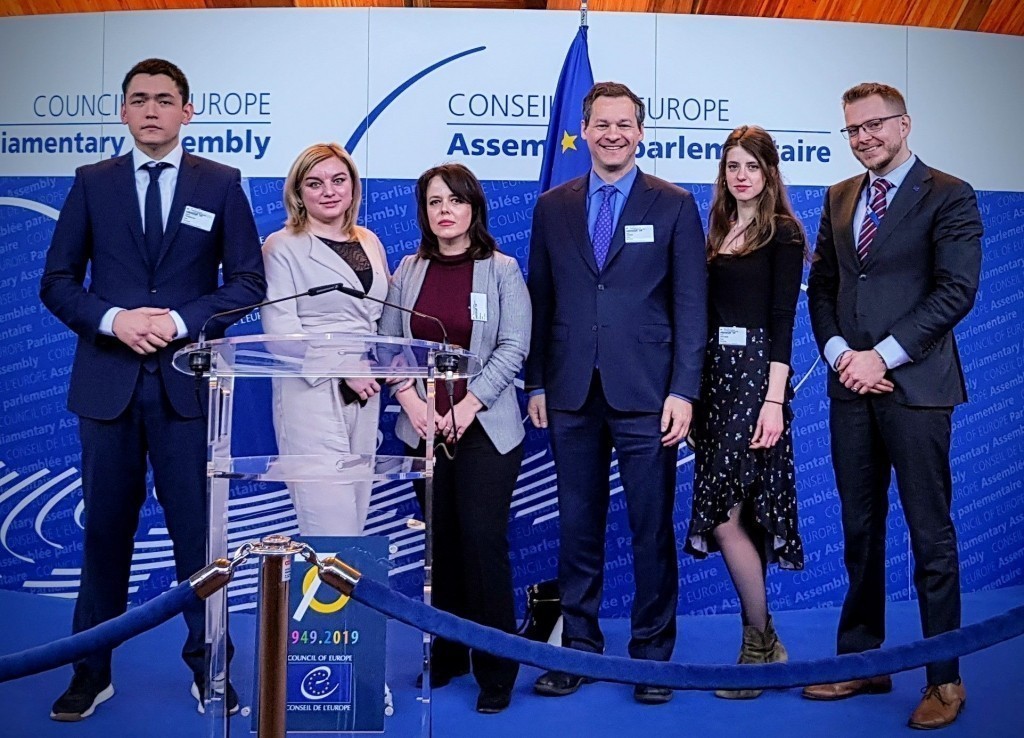 On the occasion of the PACE Spring session 2019, the Open Dialogue Foundation (ODF) and the Italian Federation for Human Rights (FIDU) organised a side-event on the Magnitsky legislation at the premises of the Council of Europe, Palais. The event was hosted by PACE Members Roberto Rampi (Italy; SOC), Pieter Omtzigt (Netherlands; EPP/CD) and André Gattolin (France; NR) and saw the participation of legal experts, HRDs and family members of political prisoners fighting against impunity in the post-Soviet region.

The event took inspiration from the global justice campaign carried out by Bill Browder on the application of the Magnitsky law worldwide. During the event, Browder gave a video contribution answering to the question of “why PACE member States should integrate the Magnitsky law into their national legislations”. Starting from this question and from the comprehensive PACE report adopted by the Assembly, the side-event presented the features of this sanctions regime, both in terms of its application and its impact on human rights in non-democratic countries.

Senator Roberto Rampi opened the conference with some introductory remarks: “We have problems in terms of adopting real solutions when it comes to human rights; the fight is sometimes only theoretical but the Magnitsky Act can change this status. Today we have two opportunities: hearing voices of people who are fighting for such rights in their country and listening to experts who will explain how these solutions are put in place and what the first results are.”

Jared Genser, US lawyer and Managerial Director of Perseus Strategies LLC, founder of Freedom Now, an independent NGO dealing with political prisoners around the world, explained to the audience that “there are different approaches to the application of Magnitsky sanctions, but in general they are most frequently applied to individuals and entities involved in gross human rights abuses which include killings, torture, or other gross violations of internationally-recognized human rights”. During the side-event, Genser held a workshop for MPs, NGOs and diplomats present in the room, providing current and potential examples of its application, discussing the process for evaluating, imposing and removing these sanctions and explaining key elements to an effective complaint to lodge with relevant authorities.

His intervention was followed by Eleonora Bekirova, daughter of political prisoner Edem Bekirov, a Crimean Tatar activist and Ukrainian national. Bekirova urged the audience to pass the Magnitsky law in order to introduce personal sanctions against those involved in the repression of the Crimean Tatars and Ukrainians. She recalled the story of her father: “My father is recognised as a terrorist, he was put in prison on a trumped-up case, and on the trumped-up case they want him to rot in prison so that he does not come out of there to sow fear among the rest of the Crimean Tatars. Currently, 106 political prisoners from Crimea and 24 prisoners of war are illegally detained in Russian prisons, 166 children are left without fathers.”

Also present at the event was Aliaskar Yerimbetov, son of Iskander Yerimbetov, political prisoner and a hostage of Nazarbayev who was sentenced to seven years in prison on fabricated charges. Yerimbetov reported incidents of torture against his father in the detention facility and recalled that the UN concluded that Yerimbetov’s detention and arrest were arbitrary, and that the criminal prosecution and trial were accompanied by gross violations. He spoke to the audience and said: “We must push for a Magnitsky law to be adopted in every country of the European Union, as the most effective mechanism to stop human rights abusers. The rights of millions of people in Kazakhstan are at stake. It is only international accountability that can stop the impunity of human rights abusers in my country.”

According to Emin Huseynov, Azerbaijani investigative journalist and founder of the Institute for Reporters’ Freedom and Safety (IRFS), “debates about authoritarian countries are quite painful to leaders as these regimes have membership in this institution. Not only should the people that are responsible for having tortured Magnitsky and other prisoners be punished but also banks that have given these corridors, organising money laundering activities and are still without accountability.”

The event also previewed Ana Ursachi, Moldovan attorney and human rights activist. Ursachi is also known for her opposition activities: “Moldovan oligarch Plahotniuc is the main perpetrator behind several crimes; he is directly responsible for the political persecution of independent judges […] We should have a selection of people who stay behind massive crimes; such as the chief of Moldovan secrete services who was acting during the Communist time and was responsible for beating to death and torturing peaceful protesters and was promoted as President of the Constitutional Court of Moldova. Or his replacement who is responsible for international persecution of lawyers and human rights defender, such as Lyudmyla Kozlovska, one of the organiser of this event.” She commented: “perpetrators are not only free, they are in the government. We have failed with our national systems. Magnitsky law is the way.”

At the event, Pieter Omtzigt, member of the House of Representatives of the Netherlands and of the Dutch Delegation to the Parliamentary Assembly to the Council of Europe, addressed NGOs and recommended to: “make sure to provide very precise information in order to allow us to make very precise questions […] I can tell you governments do not like questions, they send their ambassadors or PR agencies to me and when they do so I know that I have asked the right questions.” Upon his initiative, the Dutch government is gathering support in the EU to have an EU-wide Magnitsky Law.

Summing up, Eleonora Mongelli, Vice President of FIDU took as blatant examples of systemic human rights violations the case of activist Lorent Saleth in Venezuela, and those of human rights lawyer Nasrin Sotoudeh and academic Ahmadreza Djalali in Iran. She concluded: “these countries have already been subjected to traditional economic sanctions. However, the result is questionable and human rights defenders know that there is a great need for more effective instruments – and this instrument can be the Magnitsky law.”

The event was moderated by Paola Gaffurini, Advocacy Officer at ODF, who briefly presented advocacy strategies for the Council of Europe member states willing to integrate Magnitsky laws into their national legislation. In closing of the event, a Q&A session allowed NGOs, members of PACE and Permanent Representations to contribute to the discussion.

On 11 March, ODF took part in another side-event at the invitation of the IRFS: “The future of Council of Europe: Zero corruption, Boosted Human Rights and Democracy”. The event was sponsored by PACE Members Maurizio Buccarella and Pieter Omtzigt. Violeta Moskalu, Head of Board of Global Ukraine Foundation and Ana Ursachi took part in the panel discussion.

The conferences were part of a 4-day mission in Strasbourg during which the Foundation and a delegation from Ukraine, Moldova and Kazakhstan had the chance to meet with public officials, diplomats from the Council of Europe, and members of the PACE. Furthermore, the ODF and the FIDU advocated for two written declarations concerning the significant deterioration of the human rights situation in Kazakhstan and in new arrests of the Crimean Tatars in Russian-occupied Crimea; lobbying for the maintaining of the Council of Europe sanctions against Russia imposed because of its aggression against Ukraine.

Watch the video recording of the events: