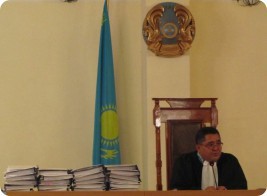 The sentence of the leader of the unregistered opposition party ‘Alga!’ was upheld by the Appellate Court. Vladimir Kozlov had been sentenced to 7.5 years and he is expected to be transported to a prison settlement as soon as on the 24th of November, 2012. Confiscation of property of the politician will be considered in a separate trial. The court did not take into account the arguments of the oppositionist’s defence and gave no justification for the ruling.

On the 19th of November, 2012, in the Mangistau Regional Court in Aktau, the hearing on which Vladimir Kozlov’s appeal was considered, lasted only a few hours. Judge Ruslan Kabiyev upheld the sentence, giving no regard to the arguments presented by Kozlov’s denfence and failing to give justification for his ruling. We should bear in mind that on the 8th of October, 2012, the politician was sentenced to 7 years and 6 months’ imprisonment with confiscation of property for inciting social hatred, calling for the overthrow of constitutional order, and establishment and leadership of an organised criminal group. Additionally, the judge did not permit Kozlov to take part in the consideration of his appeal.

The hearing of the Appellate Court was open; however, audio and video recording was allowed only during the first five minutes of the trial.

Arguments of the defence

Counsels Aleksey Plugov and Venera Sarsembina requested the court acquit Vladimir Kozlov in connection with the absence of criminal elements in his actions. The counsels pointed to the fact that the court failed to ensure contentiousness and equal rights of the parties:

1. Vladimir Kozlov was convicted under the new edition of the Criminal Code of the Republic of Kazakhstan (the CC of the RK), which makes the penalty more severe. In the sentence it was stated that the organised criminal group of Ablyazov, Ketebayev and Kozlov was established in March 2012. As of 2010, the CC of the RK provided for a penalty of up to 6 years’ imprisonment for the establishment of an organised criminal group under Article 235 of the RK. Despite the fact that the law has no retroactive effect, the court issued a verdict on the basis of the new edition of the CC of the RK of 25 November, 2011, which provides for the penalty of 7 to 12 years’ imprisonment. Having done so, the court has worsened the situation of the opposition politician by violating Article 77 of the Constitution of the RK, which stipulates that ’laws which worsen the situation of citizens, have no retroactive effect’.

3. The court ignored motions of the defense. In particular, the court ignored the defence’s motion to question the staff of the National Security Committee, which on the 30th of April, 2012, carried out a secret electronic surveillance of a Skype conference with Mukhtar Ablyazov. The court also refused to cross-examine the investigator who had conducted the process. In addition, during the trial, Judge Berdybek Myrzambekov received notes on a few occasions, and each time after reading them, he has announced a break. The counsels demanded the disclosure of the content of the notes, but the judge refused to do so. The judge also rejected many of the questions from the defence; at the same time, he did not ask the witness a single question.

4. The testimonies of witnesses were biased. No witness has personally heard or seen Vladimir Kozlov’s speeches, in which he allegedly called for actions that constitute a criminal offense. All witnesses, examined in court, referred to the rumours received from third parties, as well as to their own opinions and speculations. Also the witnesses, invited by the prosecutors, echoed the same phrase, the meaning of which they could not explain (‘politicisation of the conflict’, ‘affiliated media’).

The court made the testimony of Talgat Saktaganov the basis of the prosecution, not paying attention to the fact that he was previously convicted of organising mass riots in Zhanaozen. At the same time, it was not proven that Vladimir Kozlov gave any instructions to Talgat Saktaganov. Another key witness for the prosecution, Ayzhangul Amirova, said: “Vladimir Kozlov is guilty, because he provided help to the strikers, but abandoned them to the whims of fate, by which means he politicised the conflict.” The counsels point to the fact that there is no logic in these statements. From the words of the witness it appears that assistance is a crime, but a failure to provide assistance is a crime, too. In addition, the counsels underline that the court of first instance had not publicised any public speech of Vladimir Kozlov, urging to overthrow the government.

7. The court illegally confiscated part of Vladimir Kozlov’s property. According to the sentence, 100% of Vladimir Kozlov’s property is subject to a confiscation order. An apartment, which is the only common residence of Kozlov’s family; was seized, which is specifically prohibited by law. Taking into consideration this circumstance, Kozlov’s spouse will file a separate appeal in civil proceedings. However, the entire property of the unregistered party ‘Alga!’, officially owned by Vladimir Kozlov, will be confiscated according to the decision of the court.

Arguments of the prosecution

In his five-minute speech, prosecutor Amirgali Zhanayev requested the court to uphold the sentence. He gave the judge the following arguments:

1. The court did not consider the fact that the witness Talgat Saktaganov was previously convicted of organising mass disorders, since this case was directed to separate proceedings.

2. Arguments about the illegal confiscation of property are irrelevant, because these issues are settled at the stage of execution of the sentence.

3. The fact that judge Berdybek Myrzambekov did not ask the witness a single question, does not consititute a violation, because the court shouldn’t take any side, whether that of the prosecution or of the defence.

4. The court has fully proven the origin of the seized leaflets.

The counsel Aleksey Plugov stated that the accusation is only a part of the indictment. And this part is identical with the sentence. Also, the lawyer noted that in his speech, the prosecutor did not respond to most of the comments made by the defence.

The prosecutor refused to debate with counsels.

Vladimir Kozlov has not received permission to be present at the hearing, despite the fact that the Criminal Procedure Code gives him the right to do so. Human rights activist Zhemis Turmagambetova who met with Vladimir Kozlov in the morning of the 19th of November, 2012, claims that the defendant was willing to take part in the hearing. The court ordered that he be brought to the court, but “the detention centre did not receive this order.” Zhemis Turmagambetova assumes that it is likely that the document did not even leave the court building.

According to Venera Sarsembina, the counsels hoped that the sentence would be changed at least in the part pertaining to confiscation of property. In addition, she believes that the court handed down a special ruling to the NSC in order to show to its leaders the violations committed during the investigation. Perhaps it relates to the fact that the NSC investigators did not conduct confrontations of Vladimir Kozlov and the witnesses.

The counsel Aleksey Plugov expressed an opinion that since the prosecutor did not respond to the specific comments of the defence, most likely he just had nothing to say. A famous public figure Zhasaral Kuanyshalin, agreed with this comment, noting that the prosecutor was not using legal terminology, but rather general phrases. Vladimir Kozlov’s lawyers will file a cassation.

Evgeniy Zhovtis, president of the Kazakhstani International Bureau for Human Rights, stated the following: in court the whole sentence was put in to doubt, and, at the same time, the court decided not to question the former defendants Akzhanat Aminov and Serik Sapargali. “No international principles of a fair trial were respected. The Criminal Procedure Code contains a requirement that the Appellate Court must give justification for its ruling. The court did not abide by this principle. No one here is particularly interested in any debate, or discussion, or arguments, or statements”. Yevgeniy Zhovtis also stressed that since Kazakhstan has not ratified the European Convention for the Protection of Human Rights and Fundamental Freedoms, Vladimir Kozlov is deprived of the opportunity to appeal to the European Court of Human Rights, and the UN Committee on Human Rights is perhaps his only option.

Vladimir Kozlov’s right-hand man in the ‘Alga!’ party, Mikhail Sizov announced that they have prepared a set of documents for the establishment of the Republican Civil Association ” Committee for the Defence of Political Prisoners of Kazakhstan.” The association will fight for the release of political prisoners, as well as for the rehabilitation of ex-convicts (Sergei Duvanov, Yevgeniy Zhovtis, etc.). Mikhail Sizov informed that the ‘Alga!’ party will face organisational challenges because its offices will be confiscated, but it will still continue to exist as long as the authorities do not label it ‘extremist’ or ‘terrorist’.

According to preliminary data, Vladimir Kozlov’s transfer will take place on the 24th of November, 2012.

The mentioned facts confirm that the trial of Vladimir Kozlov is of apolitical nature and it does not meet international fair trial standards. The Open Dialog Foundation calls upon the international community to: