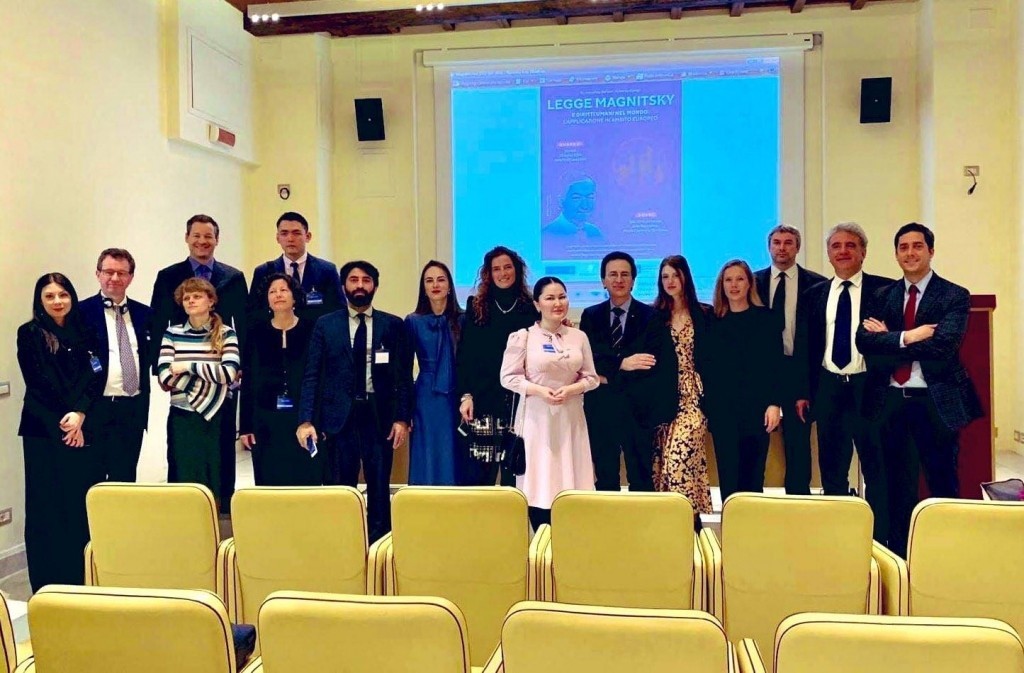 On Thursday 28 March, 2019, the Italian Federation for Human Rights (FIDU), the Open Dialogue Foundation (ODF), the Nonviolent Radical Party, Transnational and Transparty (NRPTT) and the EU–Russian Expert Group on Combating Transborder Corruption organised an international conference on the application of the Magnitsky law, at the premises of the Italian Senate. The event was organised on the initiative of Italian Senator and PACE member Roberto Rampi.

The event featured a line up of accomplished experts, NGO representatives and victims of human rights abuses fighting impunity in non-democratic countries. The speakers all agreed on the urgent need to adopt the Global Magnitsky Act (GMA) in Italy and worldwide. The first part of the seminar was dedicated to the overall understanding of the design of the legislation and its implementation at the level of international institutions and national parliaments. During the event, a brief workshop was held tackling tangible outcomes that this legislation has produced on human rights in countries where the law is already in force. In the second panel, activists and direct witnesses of human rights abuses from Russia, Ukraine, Kazakhstan, Azerbaijan, Venezuela and Moldova were given the floor to bring their testimonies.

Opening the first panel under the title “From the Global Magnitsky Act to the Council of Europe: the application of the Magnitsky legislation and human rights in the world. Where are we in Italy?”, Senator Rampi stated that “years ago, the GMA wasn’t a topic of public domain. Right now we are raising the attention following the common position of the European Union and the Council of Europe.” Senator Rampi previously submitted a legislative proposal to the Senate for the adoption of an Italian-like Magnitsky Act. He commented on this saying: “there are questions related to its transposition into the Italian legal system; we do have a first draft which has been submitted to the Senate and, together with my colleagues, we’ll bring this discussion at the level of the Chamber of Deputies as well.”

Introductory remarks were followed by the intervention of Antonio Stango, moderator of the conference and President of the Italian Federation for Human Rights, co-founder of the Italian Helsinki Committee. Stango reiterated that “the methods that enable States to respect human rights can be of every kind. Targeted sanctions are applied on individuals rather than States; this requires a complex application towards those responsible for human rights violations or giant corruption schemes.”

During the conference a video message by Bill Browder was screened. Browder is the founder and CEO of Hermitage Capital Management and leader of the global justice campaign for the adoption of the Global Magnitsky Act, who on this occasion said that “the GMA is a new technology for dealing with human rights abuses. Traditionally, sanctions were applied to countries, but now you can avoid punishing innocents and target individuals only. The GMA has already been applied towards those officials responsible for the death of Sergei Magnitsky and Saudi journalist Jamal Khashoggi, as well as against officers close to Maduro in Venezuela and against those guilty of mass killings during the student protests in Nicaragua, in April 2018.”

Representing the Forensic National Council (FNC) was Francesco Miraglia, lawyer and member of the Human Rights Committee of the FNC. Miraglia highlighted that the murder of Magnitsky represents an attack on lawyers and added that “lawyers have historically exercised their profession for others. Whenever oppression is exercised by the highest figures in power, there is a risk that those who hold power will oppress the weak. Therefore, the role of the lawyer has traditionally been that of representing the weak and their rights before a court.”

Stango introduced another prominent guest, Gunnar M. Ekeløve-Slydal, Deputy Secretary of the Norwegian Helsinki Committee (NHC), who raised and debunked three common myths against the Magnitsky law: “1) the legislation is perceived as anti-Russian, but favours the Russian population and those pro-democratic and anti-corruption forces; 2) the name would foster anti-Russian sentiments, but what is important is the scope of the legislation and its link with Sergei Magnitsky, who was murdered for its cause; and 3) sanctions traditionally harm the economy, which can’t be true for the Magnitsky laws, as it instead improves the economy of a country, by fighting corruption.”

Alice Stollmeyer, activist and Executive Director of Defending Democracy, a civic initiative and advocacy digital strategist for European affairs, recalled the common values of justice and democracy to all EU member States and reiterated that the European Parliament voted by a vast majority for a Global Magnitsky Act. She highlighted that “it is important for the EU to defend its own values in order to be able to remain a polar star for other countries as well”.

Jared Genser, US lawyer and Managerial Director of Perseus Strategies LLC and founder of Freedom Now, an independent NGO dealing with political prisoners around the world, held a brief workshop on the concrete application of the legislation. He elucidated the criteria of the “worst of the worst” which drives the process of listing human rights abuses. Genser explained that “in light of limited resources of governments and intergovernmental institutions, global Magnitsky sanctions are generally focused exclusively on the worst-of-the-worst major abusers whose sanctioning will both obtain a measure of justice and accountability for victims but also send a clear signal to that government and the world about offensive conduct. Examples might include: the head of a security agency that tortures dissidents, an agency that runs a country’s prison system, judges or prosecutors responsibility for imprisoning many political prisoners or the head of a government-sponsored death squad.” Genser also gave the audience, MPs and NGOs, concrete recommendations on key elements of a complaint to relevant authorities proposing a Magnitsky listing.

As underlined by Laura Harth, representative of the NRPTT at the United Nations “traditional economic sanctions impoverish populations which are already exhausted by their regimes, while the great abusers enrich themselves even more. It is crucial, now more than ever, to start a discussion about Magnitsky law in this particular moment during which intergovernmental institutions, such as the United Nations, are under pressure.”

The second panel “The impact of the Magnitsky law on the protection of human rights. Testimonies from different countries” was introduced by Paola Gaffurini, Advocacy Officer at the ODF. She stressed on the role of NGOs in listing abusers and reported that “both the European Parliament and the Parliamentary Assembly of the Council of Europe have encouraged the establishment of a consultative consortium of NGOs, as well as a database that would gather impartial and verified information on the identity of those individuals that have committed such kind of crimes”.

Her intervention was followed by the testimony of Emin Huseynov, Azerbaijani investigative journalist and founder of the Institute for Reporters’ Freedom and Safety (IRFS). Huseynov told the audience that “corruption produces enormous human rights violations […] authoritarian leaders are linked to organised crime, they are leaders that have not been elected. Talking about the Italian context, I would like to tell you that the wife of the Azerbaijani dictator often pays a visit to the Vatican and funds the renovation of historical sites despite the fact that people in my country are under a regime of slavery.” He added that “there are hundreds of people who, like Magnitsky, have been murdered because they spoke out about corruption”.

The dramatic human rights situation in Venezuela was further developed by Rodrigo Diamanti, Venezuelan human rights activist and founder of the Un Mundo Sin Mordaza non-governmental organisation. Diamanti said that Magnitsky legislation is very much needed, as “Venezuela is now a kleptocracy. Twenty percent of the wealth is stolen by the élites in power; this has had as a consequence a humanitarian crisis. The richest country of South America became the poorest. Italy and the European Union have to impose an international cost on these violations.”

The following speaker was Anastasia Kirilenko, investigative journalist based in Paris, researcher at the EU–Russian Expert Group on Combating Transborder Corruption and co-producer of the documentary Putin and the mafia (2018). At the Transborder Corruption group, Kirilenko follows cases of corruption that have led to human rights breaches. She mentioned what usually happens in Russia, her country of origin: “Russian authorities often send to other jurisdictions documents signed by the State Duma to state that an individual who is being investigated for corruption crimes in other countries is clean. This is called political corruption and it happens when criminals have connections with legislators and institutions. As Bill Browder said, when there is no mechanism to punish such behaviour, this mechanism should be created.”

Interjecting on the situation of Ukrainian political prisoners in Russia and occupied Crimea was Oleksandra Matviychuk, Ukrainian lawyer, activist and President of the Center for Civil Liberties (CCL) and leader of the international LetMyPeopleGo campaign. Besides the cases of the so-called hostages of the Kremlin, such as Pavlo Hryb or Edem Bekirov, Matviychuk also recalled that “dictators are not interested in resolutions but in keeping billions […] the application of the Magnitsky law will have a domino effect against the brutalities of human rights and many other aspects”.

The escalation of human rights violations in Kazakhstan was illustrated by Maigul Sadykova, activist and blogger from Astana. Maigul fell victim to frequent unjust treatment and arbitrary detention for supporting the peaceful opposition movement Democratic Choice of Kazakhstan (DVK) that was banned by the Kazakh authorities in March 2018 as an “extremist” organisation. During her intervention, Sadykova called upon the international community to stop hundreds of unlawful detentions and demanded that “the European Union and the Embassies in Astana/Nursultan be present during the holding of politically motivated trials and peaceful protests, and intervene”.

At the end of the conference, MPs and attendees were invited to raise questions on specific topics discussed by the speakers. A short intervention was made by civil activist Andrey Khalik from Russia and by Aliaskar Yerimbetov, son of political prisoner and Nazarbayev’s hostage Iskander Yerimbetov, who made a short statement in support of his father and on the need to impose sanctions against those officers who systematically commit torture in detention facilities in his country.

Watch the video recording of the event by Radio Radicale: