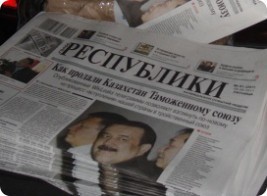 Tommorow the newspaer ‘Golos Respubliki’ will not be delivered to readers

The Medeu District Court ordered the seizure of the circulation of the newspaper ‘Golos Respubliki’ after it arrives at the airport of Almaty. This means that tomorrow, the latest issue of the newspaper will not reach readers.

Ruling No. 2-8197/12 dated 21th of November, 2012, was handed down by Judge Gulmira Ramazanovna Beisenova YESTERDAY. Although, yesterday our staff contacted the  court’s office and were informed that the lawsuit filed by the Prosecutor’s Office against the ‘Golos Respubliki’ was yet to be received.

Meanwhile, the date on the motion is the 20th of November, 2012. The court decision was issued with yesterday’s date – that is, not only  was the motion was accepted by the court for consideration yesterday, but the judge even managed to make a decision on it.

We should also point out that we were refused the opportunity to peruse the registration book at the court office, which, in turn, confirms our suspicions: the motion was concealed from the editors intentionally so that we would learn of the seizure of the circulation as late as possible.

The semantic content of the court decision is a separate issue. After reading it, we do not know whether to laugh or cry. We will quote only one short excerpt from the text: “To terminate the distribution of one mass media outlet ‘Respublika’ in the territory of the Republic of Kazakhstan”.

That means, that the allegation made by the Prosecutor’s Office, that 8 newspapers and 23 online websites are one mass medium outlet ‘Respublika’, has not been even considered in court, and the judge already presents this statement as if it had been already determined to be true!

The content of the lawsuit statement of the Prosecutor’s Office is no less amusing. TOMORROW, ON FRIDAY, 22nd of November 22, 2012, at 12.00, at a press conference at the National Press Club, the editorial staff will present in detail the know-how of the Kazakh Prosecutor’s Office.

ATTENTION. The circulation of the newspaper ‘Golos Respubliki’ arrives in the Almaty airport from Moscow today, 21st of November, 2012, at 8.00 p.m., Almaty time. We invite you to take part in the ‘ masked spectacle’, connected with its seizure.

More on this topic:
Kazakhstan , Respublika , repressions , freedom of media