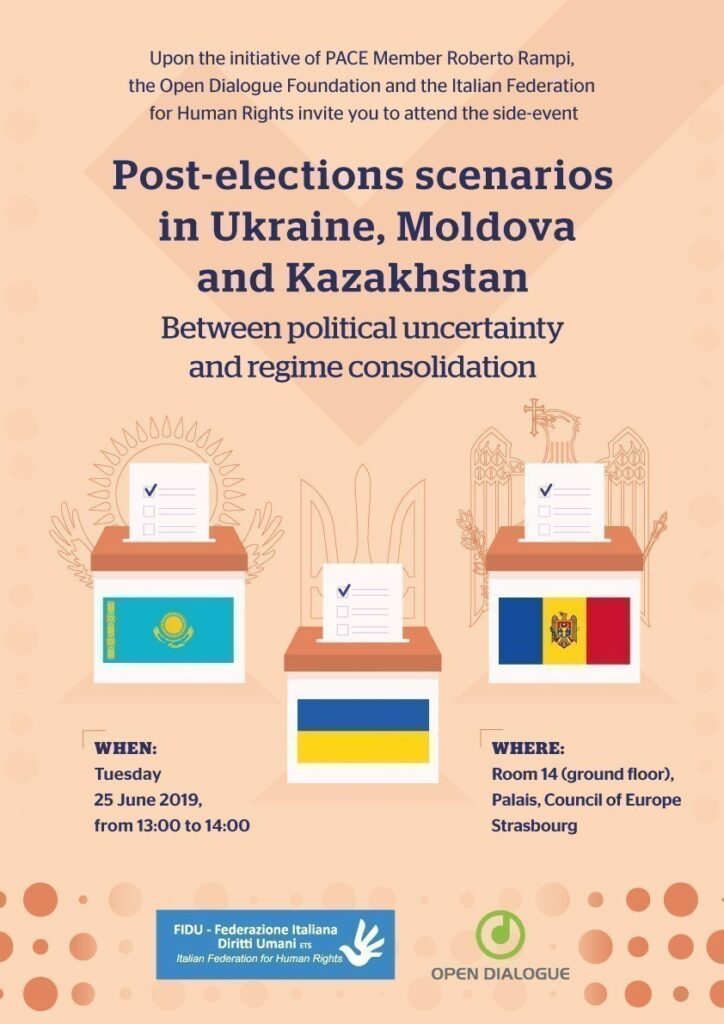 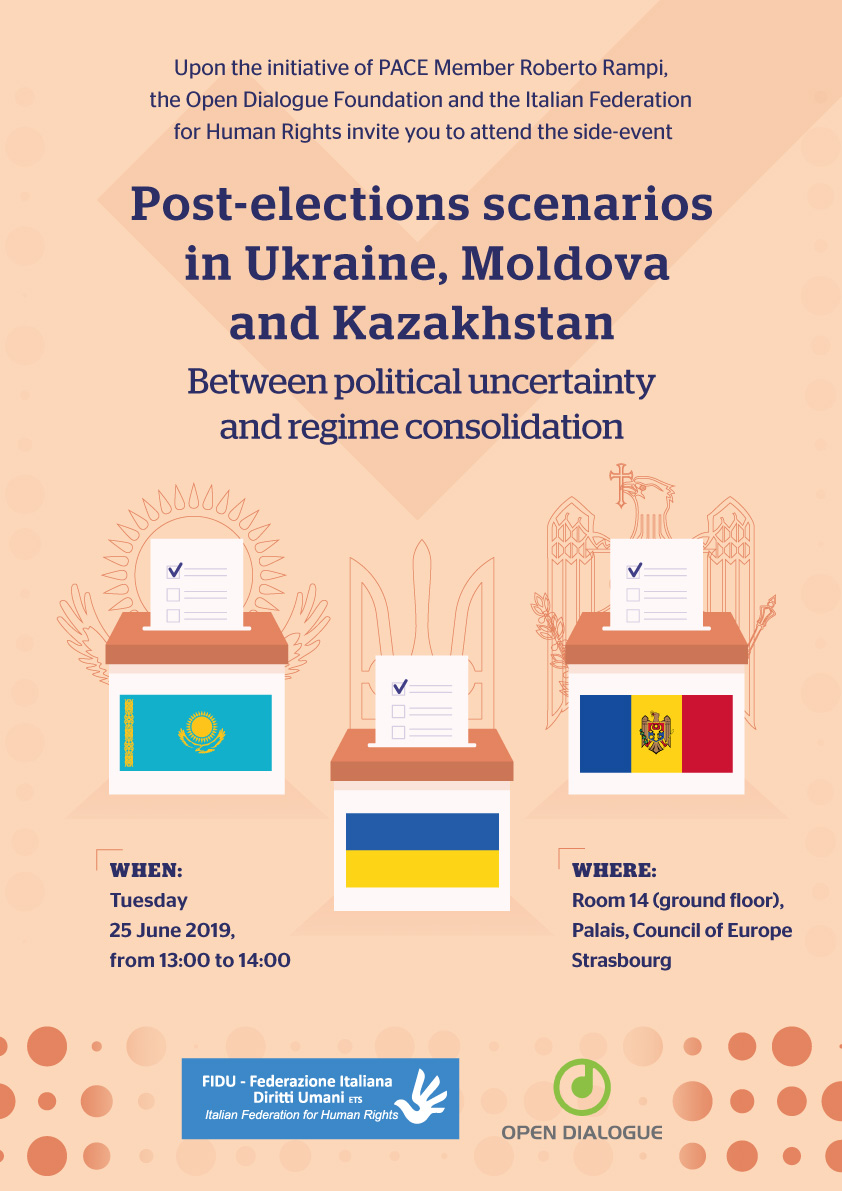 Upon the initiative of PACE Member Roberto Rampi (Italy; SOC), the Open Dialogue Foundation and the Italian Federation for Human Rights invite you to attend the side-event “Post-elections scenarios in Ukraine, Moldova and Kazakhstan. Between political uncertainty and regime consolidation”. The event will take place on Tuesday 25 June 2019, from 13.00 to 14.00, room 14 (ground floor) on the occasion of the PACE Summer session, at the premises of Palais of the Council of Europe, in Strasbourg.

Political uncertainty has shaken the post-Soviet area after elections took place in Ukraine, Moldova and Kazakhstan. This side-event is aimed at bringing together CSOs and Members of the Parliamentary Assembly of the Council of Europe who took part in election and human rights observation missions, with the goal to discuss the current situation and attitude of the new and old ruling elites towards the challenges of the future. The speakers will tackle the countries’ international profile, their commitments and response to the demands of local civil society.

In Ukraine, the victory of a comedian and political novice, Volodymyr Zelensky, as the sixth President, seems to have been a protest vote, catching the attention of a big part of society. With little or no party representation in parliament, the newly inaugurated President has dissolved the Verkhovna Rada. However, under the strict monitoring of a vibrant civil society, Zelenksky will have to enact his agenda to accelerate anti-corruption reforms, tackle the challenge of war with Russia and Russia’s backed separatists, as well as deal with their occupation of Crimea and Donbas.

In Moldova, parliamentary elections were held in late February and inconclusive coalition talks seemed to threat the governance of the country. Eventually, on June 8 the anti-corruption opposition bloc called ACUM announced a new government coalition with the Socialist Party. Forced to choose for “the lesser of two evils”,  the ACUM bloc led by Maia Sandu and Andrei Năstase will put forward an agenda to get rid Moldova of oligarchic interests, investigate corruption scandals and exclude from the games the Democratic Party, often labelled as kleptocratic.  The international community has welcomed the newly announced government. However, the new formation will have to deal with the inheritance of the country’s most powerful politician, Vlad Plahotniuc, who has been severely harassing and prosecuting dissenting voices while in power.

Snap presidential elections in Kazakhstan were announced on June 9 by interim President Kassym-Jomart Tokayev, speeding the vote up by almost a year. The transition of power comes after President Nazarbayev having stepped down after 30 years of near-absolute power. The call for snap elections is yet another move of the ex-President to maintain the status quo as statesman and founding father, which will allow him to effectively control the political and economic affairs of the State. However, the transition of power has already intensified anti-government rallies in the whole country, with peaceful protesters demanding free and fair elections and the release of political prisoners. The government in turn has harshly repressed public gatherings and shut down the Internet to hide evidence of such violations.

The speakers’ interventions will be followed by questions by parliamentarians and representatives of permanent representations and a Q&A session.

A live stream of the event will be available on our Facebook page.