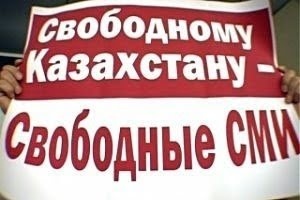 Attempts made by the Kazakh authorities to ban the activities of opposition parties and the media outlets in the country have caused a strong negative reaction among the international community.

On the 22nd of November, 2012, the European Parliament approved the report of the Rapporteur of the Social Democratic Party Liisa Jaakonsaari containing recommendations for negotiations on the agreement on an enhanced partnership and cooperation between the EU and Kazakhstan for the Council of Europe, the European Commission and the European External Action Service. The report lays down that a closer cooperation between the EU and Kazakhstan will only be possible if the Kazakh party takes major efforts to improve the situation around democracy, human rights, and if it  guarantees freedom of expression and freedom of association. The European Parliament expressed its deep concern over the lawsuit, which had been filed by the General Prosecutor Kazakhstan, concerning the ban of opposition parties and the media outlets in Kazakhstan.

The organisation Reporters Without Borders issued a statement in which it urged the court to dismiss the motions filed by the Kazakh Prosecutor’s Office, as they pose a tremendous threat to freedom of speech in Kazakhstan. “Under the guise of fighting extremism, the government began an unprecedented prosecution of its critics. Before it is too late, the international community should strongly respond to such actions carried out by the Kazakh authorities”, – the statement reads.

Amnesty International urged the Kazakh authorities not to cite the fight against extremism when attempting to destroy their opponents. The organisation fears that, should the Kazakh court be permitted to make a decision on the future of independent media, free press and TV organisations may disappear forever from Kazakhstan. “The Kazakh authorities are obliged to protect the freedom of expression in the country. Members of the media organisations should conduct their professional duties without fear of potential reprisals and smear campaigns waged against them and their families”, stated Amnesty International.

Meanwhile, the Kazakh court has already commenced actions connected with the granting of motions filed by the Prosecutor’s Office. On the 21st of November, 2012, the Medeu District Court of Almaty issued the decision on the seizure of the circulation of the ‘Golos Respubliki’ newspaper, which was to arrive in the Almaty airport on the 22nd of November, 2012.

The deputy editor of the’Golos Respubliki’ newspaper, Oksana Makushina, told the Foundation that the only thing that the editorial staff can count on in this situation is the assistance of the international community. “It is only the intervention of the international community that can stop the arbitrariness of the authorities in Kazakhstan and save the independent media outlets. Although it may seem peculiar from the outside, statements and appeals of the European Parliament do have an impact on the Kazakh authorities. Undoubtedly, it is not possible to change the situation in Kazakhstan fundamentally, but individual journalists, individual media organisations, and, in this case, the staff of ‘Golos Respubliki’, can be saved. After all, it is not simply that they are closing our newspaper now, we are also denied our right to exercise our profession. In fact, the pressure from the government is due to the fact that we have remained faithful to our professional duty, and have not kept silent, as most of the pro-government media organisations have, “- said Oksana Makushina.

A similar view was also expressed by the editor-in-chief of the online video portal ‘stan.tv’, Asel Limzhanova. According to her words, there should be no illusions about the outcome of the trial of the independent media, “It’s going to take just five days, and we’ll be recognised as extremists. Therefore, in this situation, the reaction of the European Parliament, the Western community is extremely crucial… It would be now timely to involve international expert-philologists, who would carry out an analysis of our materials, and give their opinion as to whether we are extremists or simply journalists. We have no desire to be left alone; face to face with the Kazakh justice system, so the support from the European community is important to us”- Asel Limzhanova shared her opinion.

The Open Dialog Foundation hereby calls on the international human rights organisations and the governments of democratic countries to demand from the Kazakh authorities a guarantee of freedom of expression and freedom of association in the country. In particular, we call on the OSCE and the UN to take a stand for the independent media in Kazakhstan. In this case, the position of the OSCE and the UN is very important, as it can significantly influence the actions of the Kazakh authorities.

The Open Dialog Foundation wishes to remind readers that the mandate of Kazakhstan, which was recently elected to the UN Council on Human Rights (UNHRC), imposes an obligation to comply with international standards on human rights and freedom of speech. Inturn, the UN memberstates are obliged to verify whether thesecommitments are being fulfilled.

Prosecution of several opposition media outlets and civil society organisations of Kazakhstan is based on the verdicts against Vladimir Kozlov, Serik Sapargali and Akzhanat Aminov, which came into force on the 19th of November, 2012. The ruling of the court determined that the activity of a number of unregistered NGOs and the media outlets during the Zhanaozen events of 2011 was of an extremist nature. In particular, the verdict lays down that “the study revealed that the materials released by the ‘K+’ TV channel, the ‘Respublika’ Internet portal, ‘Stan.tv’, and published in the newspapers: ‘Golos Respubliki’ and ‘Vzglyad’, comprised calls for the violent seizure of power and guidance on the ways to weaken national security”. In the verdict, the above metioned media organisations were directly labelled as controlled by Mukhtar Ablyazov. On the 20th of November, 2012, the Almaty Prosecutor’s Office filed lawsuits, demanding that the civil organisations ‘Khalyk Maidany’ and ‘Alga!’, as well as the media outlets: the newspapers ‘Respublika’ and ‘Vzglyad’, the ‘K+’ TV channel and the Internet video portal ‘Stan.tv’ be recognised as extremist and their activity on the territory of Kazakhstan be banned.