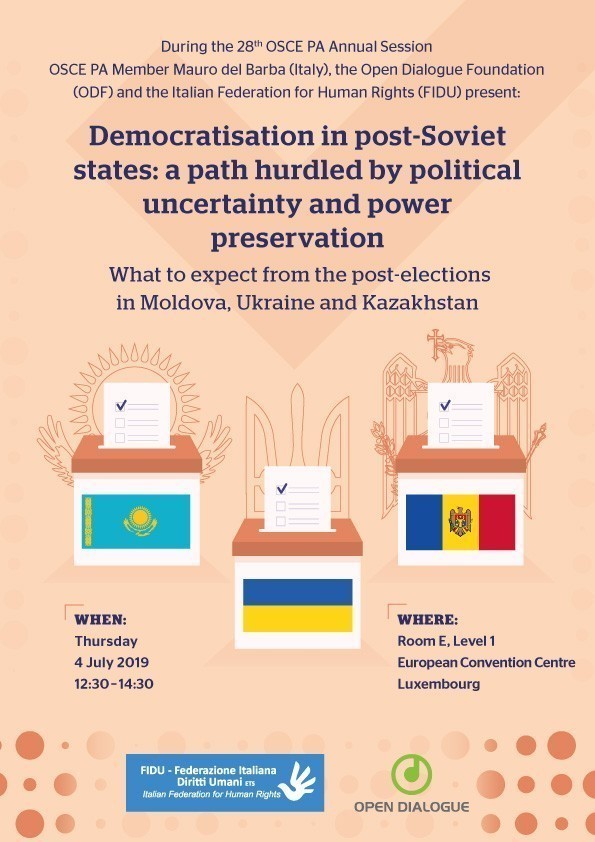 Invitation to side-event “Democratisation in post-Soviet states: a path hurdled by political uncertainty and power preservation”

Democratisation in post-Soviet states: a path hurdled by political uncertainty and power preservation. What to expect from the post-elections in Moldova, Ukraine and Kazakhstan 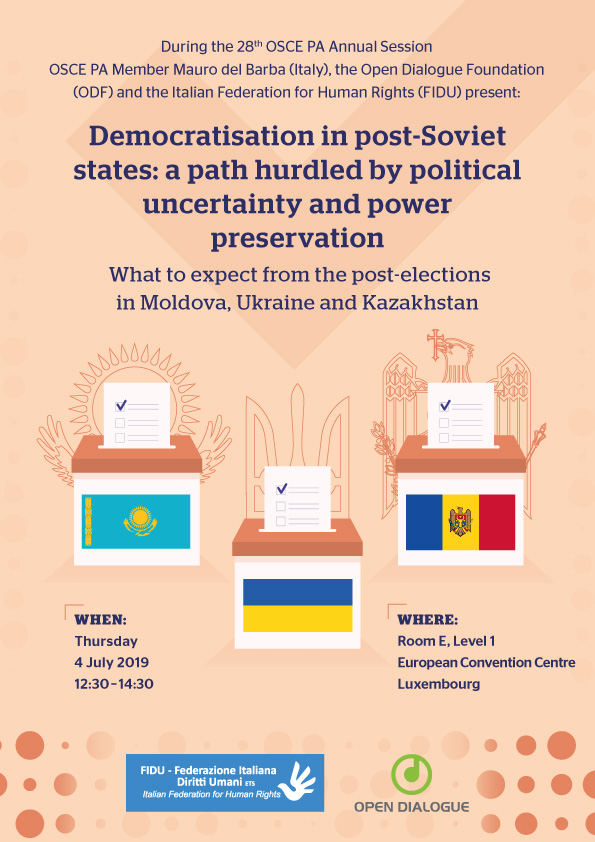 On the occasion of the 28th OSCE PA Annual Session, the Open Dialogue Foundation (ODF) and the Italian Federation for Human Rights (FIDU) are pleased to invite you to a side-event on post-elections scenarios in Ukraine, Moldova and Kazakhstan, on Thursday, 4 July 2019, from 12:30 to 14.30, room E (Level 1), at the premises of the European Convention Centre in Luxembourg. The event is hosted by OSCE PA Member Mauro del Barba (Italy; PD).

The recent elections in Moldova, Ukraine and Kazakhstan have underlined the existing challenges, and raised new ones, of the post-Soviet area’s political landscape. Several international observer delegations took part in the electoral monitoring process, including missions of the OSCE and OSCE PA.

During this side-event the main findings of the observation missions will be debated, with the aim of identifying the common features and concerns that these countries face. The analysis of the electoral process and results will be analysed to reply to some central question:

–        How can the OSCE PA best address the political situation in these countries, and improve the exchange of best practices to ensure that the rule of law, democracy and human rights are promoted?

In Ukraine, Volodymyr Zelensky was elected President in a competitive but challenging environment and against the backdrop of an ongoing armed conflict. What does the victory of a politically inexperienced candidate, based on campaign largely conducted on social networks and mass media show of Ukrainian society? Early parliamentary elections on July 21 will provide a wider picture.

In Moldova, parliamentary elections were held in late February and inconclusive coalition talks seemed to threaten the governance of the country. Eventually, on June 8 the opposition bloc called ACUM announced a new government in coalition with the Socialist Party, welcomed by the international community. However, the new formation will have to deal with the inheritance of the country’s most powerful politician, Vlad Plahotniuc.

In Kazakhstan, after 30 years of near-absolute power Nazarbayev stepped down as President. His successor, interim President Kassym-Jomart Tokayev announced snap presidential elections for June 9 speeding the vote up by almost a year. The announcement of such a transition of power intensified anti-government rallies in the whole country, especially on voting day, with thousands of peaceful protesters demanding free and fair elections and the release of political prisoners. The reaction of authorities showed a lack of regard for fundamental rights, criticised by international observers and human rights watchdogs.