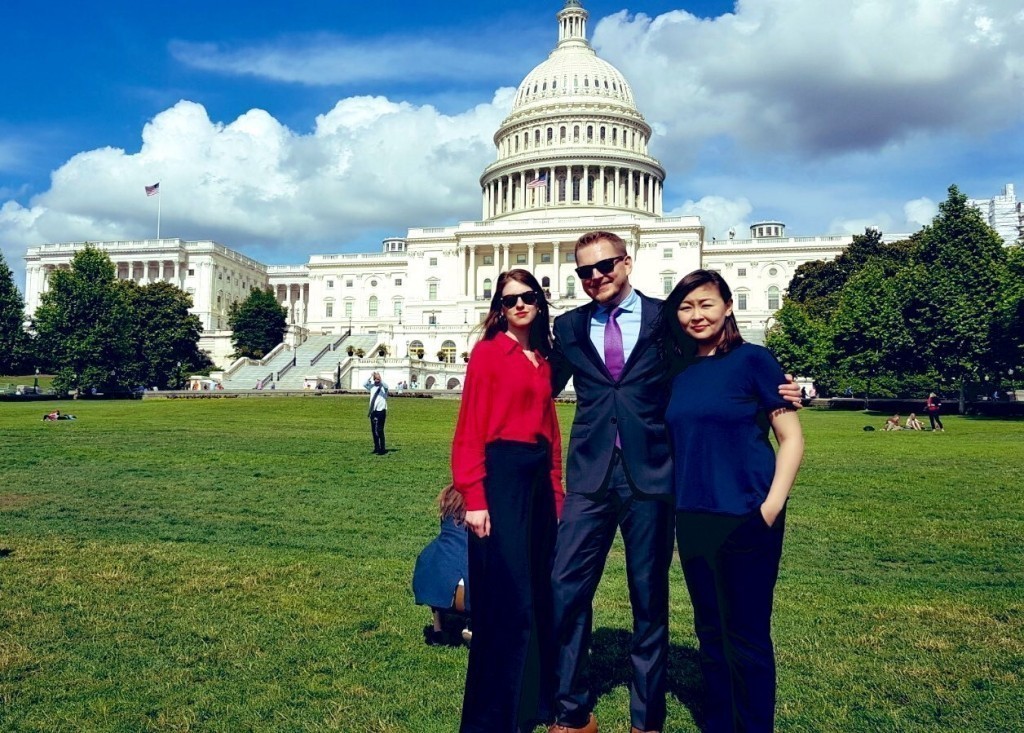 ODF in Washington D.C. on post-election developments in Kazakhstan and the crisis of civil rights in Poland

The ODF kicked off the summer season with a visit to Washington D.C. between the 12th and the 14th of June 2019. An ODF delegation, composed of Martin Mycielski, Director of Public Affairs, and Paola Gaffurini, Advocacy Officer, joined Jared Genser (with his team), a U.S. human rights lawyer currently representing political prisoner Iskander Yerimbetov, and Zhamilya Yerimbetova, daughter of Iskander, for a three-day mission in the capital.

During the advocacy mission, members of the delegation met with U.S. government institutions (e.g. the Department of State, the U.S. Helsinki Commission and the White House), think tanks, advisors and Congress representatives to discuss the state of human rights in Kazakhstan following the snap presidential election on June 9. The scope of our visit was aimed at raising awareness and demanding a prompt reaction to the deteriorating human rights record in the country. The ODF informed the interlocutors about the facade regime change that had been planned by Nazarbayev far in advance – three years ago – to maintain the status quo and give the false impression of a competitive and democratic transfer of power before the international community. As explained by Paola Gaffurini, the outcome was predetermined and Kasym-Jomart Tokayev, Nazarbayev’s protege, won the election. There was an overall agreement on the fact that Kazakhstan remains a country extremely sensitive to international pressure, having ratified most of the main human rights treaties and advanced an Enhanced Partnership and Cooperation Agreement with the EU. However, it was noted by ODF that when it comes to respect for human rights, the Kazakhstan government looks to Russia and China, disregarding most of the opinions of UN bodies, European Parliament resolutions, and recommendations from the OSCE and international human rights organisations.

Particular attention was given to the irregularities noted by the OSCE PA in the conduction of the election, mass arbitrary arrests and beatings of peaceful protesters before and during the election period (around 4,000 officially, even though the number of detainees may be substantially higher), the repeated blocking of the Internet and the drafting of young activists and students in retaliation for their civil engagement in peaceful demonstrations and human rights monitoring missions. The ODF also highlighted individual cases of surveillance, harassment and the prosecution of activists and social media users and their sentencing to long prison terms on charges of extremism, due to their alleged support for the peaceful opposition movement Democratic Choice of Kazakhstan, which was banned by the authorities in March 2018.

Jared Genser explained the circumstances that led to the unlawful imprisonment of his client, Iskander Yerimbetov, and the reactions of the international community on his case demanding his immediate release (e.g. Opinion No. 67/2018 of the UN WGAB and the EP’s resolution 2019/2610[RSP]). Iskander was sentenced to seven years in prison on bogus charges in retaliation for the activities of his sister, Bota Jardemalie, who is a long-time opponent of Nazarbayev’s regime, an attorney, a human rights defender and political refugee in Belgium. While Zhamilya Yerimbetova, daughter of Iskander, recalled the torture inflicted on his father in the detention facility to obtain incriminating confessions against Bota Jardemalie, as well as the brutal tortures that occurred in the prison facility in Zarechny (Institution LA 155/14), between 23 and 25 April 2019. She also underlined the need for the U.S. government to support civil society in Kazakhstan, particularly those young people who have lived their whole life under Nazabaryev’s rule and wrongly perceived the last election as an opportunity to put forward political and social demands. Among them, she told the stories of three brave mothers, Oksana Shevchuk, Zhazira Demeuova and Gulzipa Dzhaukerova, who took to the streets to demand major state support and are now under arrest in detention center on extremism charges.

As explained by the delegates, individual cases are representative of a broad pattern of abuse that consists of more than 15 political prisoners in Kazakhstan (according to ODF’s findings and reports) and a systematic use of torture ordered by high-level officials and carried out by their subordinates from the Ministry of Internal Affairs, the National Security Committee and heads of detention facilities. ODF highlighted that those human rights violators at every level of power still remain unpunished, while democratic countries like the U.S., do have the tools to stop their growing feeling of impunity which either demoralises or enrages the society.

Concerning the declining state of the rule of law in Poland, our delegation also met with Congress representatives interested in the issue, as well as the U.S. State Department and the major relevant Washington-based think tanks and NGOs. Our interlocutors were well aware of the rule of law crisis in Poland, but were happy to receive a set of recent reports and analyses from international and Polish civil society organisations (Human Rights Watch, Amnesty International, Batory Foundation, Civil Development Forum, Bronisław Komorowski Institute and others, including our own), focusing on the violations of civil rights. What often piqued their interest were several individual cases we discussed, e.g. of persecuted judges or activists, such as Elżbieta Podleśna or our president Lyudmyla Kozlovska.

Martin also attended two very pleasant meetings with Poles living in the U.S., including the leaders of the liberal diasporas in Washington and in Chicago, exchanging with them experiences of struggling for the rule of law in Poland from the Brussels and American perspectives.