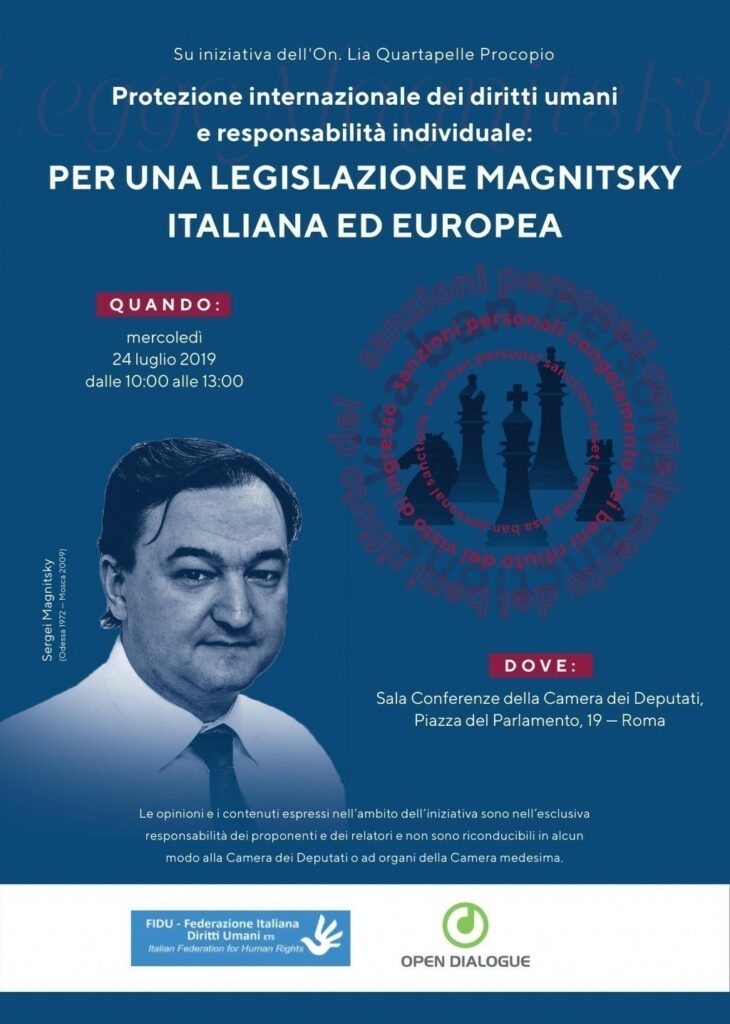 Upon the initiative of Italian Deputy Lia Quartapelle Procopio

“INTERNATIONAL PROTECTION OF HUMAN RIGHTS
AND INDIVIDUAL RESPONSIBILITY:
TOWARDS AN ITALIAN AND EUROPEAN MAGNITSKY LEGISLATION”

The Italian Federation for Human Rights (FIDU) and the Open Dialogue Foundation (ODF) are pleased to invite you to an international seminar on the application of the Magnitsky law, to be held on July 24, 2019, from 10:00 to 13:00, in the Conference Room of the Chamber of Deputies in Rome. The event is hosted by Italian Deputy Lia Quartapelle. 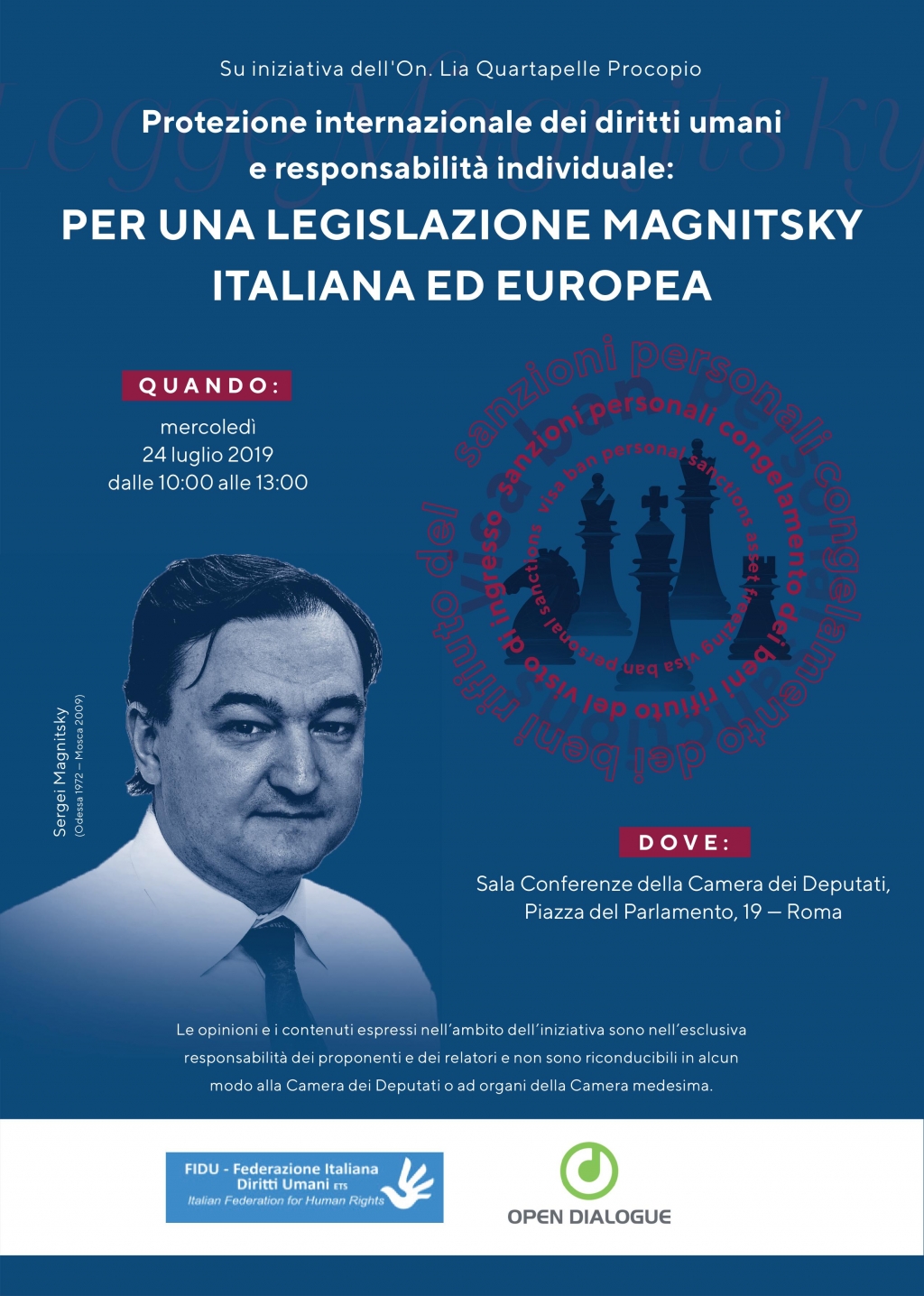 The Magnitsky law takes its name from the Russian anti-corruption lawyer Sergei Magnitsky, who between 2007 and 2008 exposed a major fiscal fraud involving high ranking authorities, police, judges, fiscal authorities, bankers and organised crime groups. After exposing such facts he was arrested and, after eleven months of detention in harsh conditions and without a trial, he died under suspicious circumstances in a Moscow prison, at 37, in November 2009. Magnitsky’s client, American entrepreneur Bill Browder, thus launched a campaigned to impose targeted sanctions against all officials involved, aiming to prevent them from entering the USA and exclude them from the US economic and financial system.

In 2012, the US Congress approved the Magnitsky Act, which provided, in particular, for assets freeze and refusals of entry visas to the US. In 2016, the law was broadened in the Global Magnitsky Human Rights Accountability Act, which enables the government of the United States to impose targeted sanctions against individuals responsible for human rights violations or grave acts of corruption in any other state. The Magnitsky law is an effective legislative tool for combating impunity in those countries where torture and human rights abuses are systematic practices. It also acts as a deterrent to the governments of those non-democratic countries that have committed the most serious violations of international human rights norms, encouraging them to avoid such behaviour and to act responsibly before the international community and its citizens.

In addition to Canada, several EU member states have also adopted the Global Magnitsky Act following the example of the United States, such as the United Kingdom, Estonia, Latvia and Lithuania. Moreover, the European Parliament and the Council of Europe have carried out effective steps to promote the Magnitsky law. On December 10 2018, on the occasion of the 70th Anniversary of the Universal Declaration of Human Rights, the EU Ministers of Foreign Affairs unanimously approved the Dutch proposal for an EU Global Human Rights Sanctions Regime based on the model of the Global Magnitsky Act. On Thursday, 14 March 2019, in a resolution, the European Parliament voted in favour of an EU human rights sanctions regime, which will symbolically carry the name of Sergei Magnitsky.

This conference aims to present the features of this diplomatic model and its concrete application in the countries where it has already been adopted, with the aim of supporting its extension in the Italian and European context. This initiative follows the example of the conference hosted by the Senate last March 28, as well as the bill filed in the Senate on March 6 by twenty senators and first signed by Senator Roberto Rampi. The first part will be devoted to the analysis of the general aspects which are necessary for a correct implementation of the human rights legislation at international, European and national level. The second part will be devoted, instead, to the evaluation of its effectiveness in other contexts where the law is already in force and its possible transposition into the Italian legal system. The speakers will include human rights defenders, Magnitsky law campaigners, and victims of human rights abuses fighting impunity in non-democratic countries, such as Russia, Venezuela, Azerbaijan, Kazakhstan, Iran and others. The event is open to every political faction.

10:00 — Session 1: From the “Global Magnitsky Act” to the Council of Europe: the application of the Magnitsky legislation and human rights in the world. Where are we in Italy?

– Lia Quartapelle Procopio — Member of the Commission for Foreign Affairs of the Chamber of Deputies
– Antonio Stango — President of the Italian Federation for Human Rights (FIDU), and co-founder of the Italian Helsinki Committee (moderator)
– Gunnar M. Ekeløve-Slydal — Vice-Secretary of the Norwegian Helsinki Committee (NHC)
– Bill Browder (video message) — founder and CEO of Hermitage Capital Management and leader of the campaign for the adoption of a Magnitsky legislation
– Bota Jardemalie — Kazakhstani lawyer, currently political refugee in Belgium, and sister of political prisoner Iskander Yerimbetov

11:45 — Session II: The impact of the Magnitsky law on the protection of human rights. Testimonies from different countries.

– Lorent Saleh — human rights activist from Venezuela, former political prisoner and 2017 Sakharov Prize laureate for freedom of expression
– Oleksandra Matviychuk — lawyer, human rights activist and president of the Center for Civil Liberties in Kyiv; she is the head of the international LetMyPeopleGo campaign, which advocates for the release of Ukrainian political prisoners in Russia and occupied Crimea, and she is the coordinator of the Euromaidan SOS initiative group
– Mehman Huseynov — Azerbaijani blogger involved in the fight against corruption in his country, director of the Institute for Reporters’ Freedom and Safety (IRFS), recently released from prison thanks to the support of the international community
– Zhanbota Alzhanova — Kazakhstani activist for human rights and volunteer at the Italian Federation for Human Rights. Zhanbota was victim of unfair treatment and arbitrary detention for reporting serious civil liberties violations during the presidential election day on June 9
– Eleonora Mongelli — Vice-President of the Italian Federation for Human Rights (FIDU)
– Giulia Tranchina (TBC) — human rights lawyer, specialised in migration and asylum law; she is based in London where she works for the Wilson Solicitors law firm

The opinions and content expressed are the sole responsibility of the proposers and of the speakers and are not attributable in any way to the Chamber of Deputies or to the organs of the Chamber itself.
Access to the room — with proper dress code and, for men, obligation of suit — is allowed until the maximum capacity is reached. Journalists should demand accreditation by sending an email to [email protected] or by phone at 06/67603431 or 06/67603729.