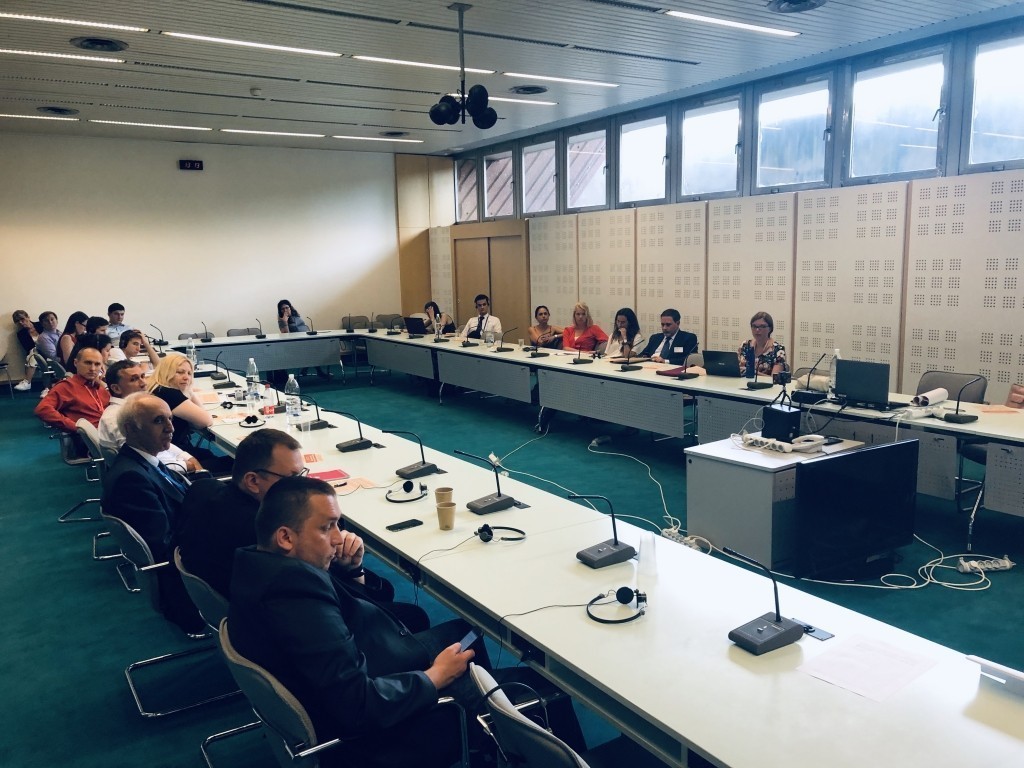 On June 25, 2019, upon the initiative of PACE Member Roberto Rampi (Italy; SOC), the Open Dialogue Foundation and the Italian Federation for Human Rights hosted the side-event “Post-elections scenarios in Ukraine, Moldova and Kazakhstan. Between political uncertainty and regime consolidation”, which took place in the context of the PACE Summer session, in Strasbourg.

The event gathered a panel of high-level experts of the post-Soviet region and lawmakers who took part in different electoral and human rights monitoring missions to the countries presented. Among them were: Roberto Rampi, Italian senator and a member of the Italian Delegation to the PACE; Antonio Stango, President of the Italian Federation for Human Rights and co-founder of the Italian Helsinki Committee; Oleksandr Pavlichenko, Executive Director of the Ukrainian Helsinki Human Rights Union; Bota Jardemalie, Kazakhstani attorney and sister of political prisoner Iskander Yerimbetov; and Ana Ursachi, Moldovan attorney and human rights activist. The discussion was moderated by Lyudmyla Kozlovska, human rights defender and President of ODF.

The overall objective of the event was to discuss the post-vote scenarios, following the different outcomes in Ukraine, Moldova and Kazakhstan. In Ukraine, the anti-corruption reforms stall and the ongoing Russia-Ukraine war triggered a protest vote which led to the election of Volodymyr Zelensky as new President. In Moldova, the parliamentary elections held in late February brought to the creation of a government coalition between new anti-corruption and pro-European forces led by Maia Sandu and Andrei Năstase and the old establishment of the Socialists. In Kazakhstan, the snap presidential election held on June 9 led to the confirmation of Kassym-Jomart Tokayev as the second President of Kazakhstan, a result which led to intensified anti-government rallies and to the imprisonment of an unprecedented number of activists and civilians.

The absence of one person in the panel was immediately brought to the audience’s attention by senator Roberto Rampi in his opening speech: “Mr Khassenov is fighting for the rights of his people in Kazakhstan and couldn’t be here with us today. He chose the correct fight. His country doesn’t want him to be here speaking with us at the Council of Europe, so our role is to remind him that what he is doing is very important, for us and for the country. Civil society’s words are important, its ideas are important, civil society is the right actor to engage in this fight and we have to provide all the support we can.”

Antonio Stango spoke about his encounter with civil society and authorities in Odessa prior to the elections during an observation mission with FIDU: “The situation of the three countries we are talking about today has some common background and several differences. If we talk about fundamental rights such as freedom of assembly and freedom of expression, Ukraine is in a much better situation than the others”. He also spoke about the issue of corruption in Ukraine and how serious it is: “The decentralization of power in Ukraine probably favored the regional governments, which in some cases have connections with criminal groups. This is also the probable reason why Ukrainians chose Zelensky as the new President, a man with no political background whatsoever”.

The fate of Ukrainian political prisoners in Russia and in the occupied territories of Crimea still represents a big concern for human rights activists and observers. As Stango stated: “This, along with the evolution of Ukraine’s relations with Russia, is an enormous concern for the international human rights community as a whole”.

Stango took part in several observation missions to Kazakhstan and told the audience that the situation there is much different: “The fact that almost 4000 people were arrested for peaceful demonstrations on the same day as the elections, as well as in the day after, is a very bad sign that shouldn’t be overlooked. It shows us how difficult it is to work for human rights in places where the government’s mentality is so tough against any kind of civil liberty”.

Next, Oleksandr Pavlichenko spoke about the work and engagement of Ukrainian civil society, which will now have to engage with President Zelensky who represents, in his own words, “the result of your [the old political class’s] mistakes and promises”.

Pavlichencko is confident that Ukrainian civil society will not budge now that Mr Zelensky is President but will keep being an important interlocutor of the authorities, as it has been during the past five years: “Activist movements have been increasingly important, especially those movements related to the fight against corruption. This increase resulted in attacks, threats and discriminatory measures, such as the mandatory identification of anti-corruption activists carried out by the government and the black business. We expect from the new administration that the role of civil society will not be diminished and that we’ll have access to all discussions related to crucial matters at the domestic level (e.g. political prisoners in Crimea and Russian Federation).”

It was then the turn of Bota Jardemalie, Kazakhstani political refugee in Belgium and sister of political prisoner Iskander Yerimbetov, to present the worrying human rights situation in Kazakhstan and address the mass arbitrary detentions following the snap presidential election.

Before starting her intervention, she spoke on behalf of Danyiar Khassenov, who was not allowed to come and take part to the event: “Unfortunately this is a very common practice in Kazakhstan, where activists are stopped at the border and are not allowed to leave the country without an explanation. Very often, even formal invitations are not a sufficient reason to let these people leave the country, as their words might be dangerous”.

Kazakhstan took quite some space in the international press because of Nursultan Nazarbayev’s resignation back in March 2019, and the subsequent election of interim president Kassym-Jomart Tokayev, official new President of the country, on June 9. “Since the death of Uzbekistan’s President Islam Karimov back in March 2016, Nazarbayev has been concerned and worried about the transmission of power, and he worked to ensure the power would stay within his reach and allow for his family to be secured. Nazarbayev himself admitted it, and Tokaev confirmed it in his first speech as the new President.”

Even though Nazarbayev’s name did not appear on the ballot for the very first time, this year’s election was far from being fair and democratic: “Serious legal barriers were created to stop people from running for presidency an opposition candidate, in order to better ensure victory for the candidate of Nazarbayev’s choosing”.

Bota Jardemalie highlighted in her intervention that independent media are also banned in Kazakhstan. “We (civil society members) use social media and messaging apps but during the election the authorities routinely blocked the internet to avoid the spreading of dissident sentiment”.

Peaceful opposition movements called upon the scam election. Thousands of participants in peaceful rallies that protested against the unfair elections were subjected to detention, brutal violence and threatening measures by law enforcement agencies. “4000 people were arrested after the election, according to the authorities, but they were probably even more” said Jardemalie, “and the involvement of DCK (Democratic Choice of Kazakhstan) has been mentioned as well. Most of the people arrested are now facing accusations of extremism and are facing serious criminal charges up to 70 years of imprisonment”.

According to Jardemalie, this is just the beginning of a wave of protests. She said: “These election has shown a crisis of legitimacy of this regime. The protests will continue, and instability will keep being a reality until a real change happens in the regime. What I ask you all is to listen and pay attention to the real side of this story, as civil society in Kazakhstan needs the support of the international community to keep up the fight for human rights and democracy”.

Moldovan attorney and human rights defender Ana Ursachi presented new updates on the unprecedented political situation in Moldova. On February 24, after the elections, a majority in the Parliament was created. On the same day, six judges of the Constitutional Court, very close to super-oligarch Vlad Plahotniuc, issued a judgment ruling that the parliamentary majority and the appointed Prime Minister were dismissed. “This was an illegal decision, an ultimate proof of Plahotniuc’s abuse of power and also a blow to the rights of people in Moldova” said Ursachi. She added: “but more shameful things happened right after the elections. On June 11, the European Court of Human Rights found Moldova guilty of kidnapping seven Turkish asylum seekers on the basis of financial arrangements between Plahotniuc and Erdogan”.

To close her speech, Ursachi stressed  the expectations of the Moldovan civil society: “Although it is difficult to envision what will happen in the future, Moldova is welcoming the latest events with optimism, and we request our new government that all perpetrators of violence, jailing, threatening our civil society and human rights are brought to justice, in order to restore confidence and trust in the authorities”.

The closing remarks came from Senator Roberto Rampi who reminded the audience about the fight for democracy in these countries and insisted on the importance of supporting such movements from the outside: “We need the Council of Europe to be aware of what’s happening in these countries and speak out. As we know, we cannot have improvements on human rights by only engaging from outside as the only way to truly change the situation is to act from inside the country. Still, we shouldn’t forget that our role is fundamental to support the fight of people fighting from the inside”.

This event was part of a recent advocacy mission of four days, during which the delegation had the opportunity to meet and hold discussions with high level officials, including MPs, staff members of the Council of Europe and Permanent Representations. During this mission, 32 PACE members from various national delegations (eg. Italy, France, United Kingdom, Germany, Portugal and others) signed the Written Declaration no. 682, named “Co-operation with Kazakhstan must be reconsidered in response to its rigged presidential election and mass arrests”. The declaration, initiated and tabled by Italian Senator Roberto Rampi, condemns mass arbitrary arrests and political persecution of peaceful protesters during snap presidential election and calls for the implementation of the recommendations expressed by the United Nations and the European Parliament, while also encouraging the imposition of personal sanctions “upon those accountable for the aforementioned human rights violations and electoral fraud in the country”.