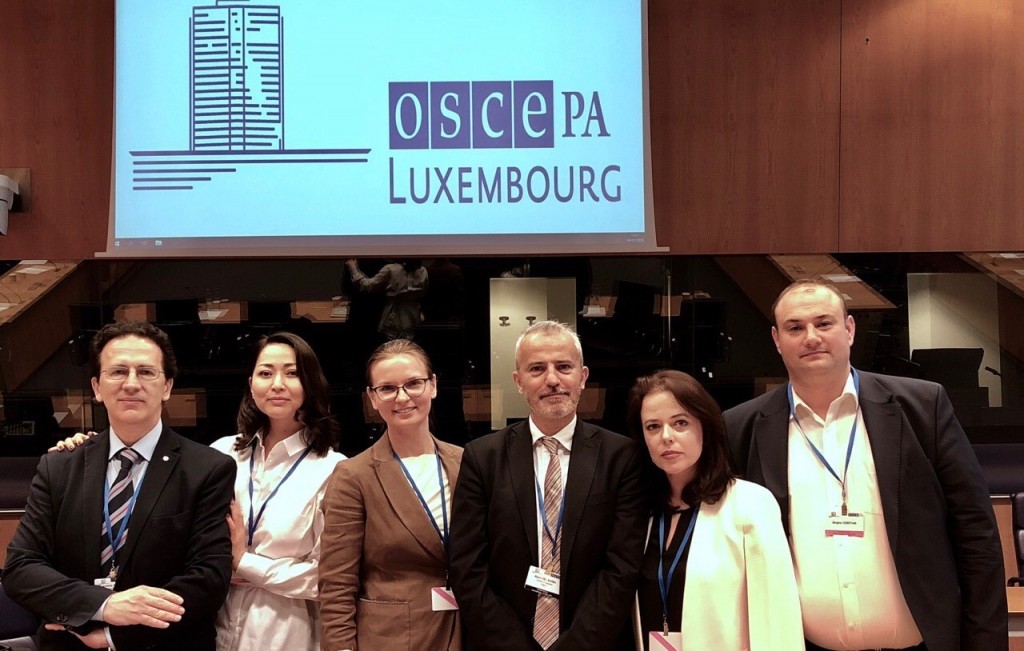 On July 4th, in occasion of the 28th OSCE PA Annual Session, the Open Dialogue Foundation (ODF) and the Italian Federation for Human Rights (FIDU) organised a side-event on post-elections scenarios in Ukraine, Moldova and Kazakhstan at the premises of the European Convention Centre in Luxembourg. The event, hosted by OSCE PA Member Mauro del Barba (Italy; PD), was part of a bigger mission to Geneva and Luxembourg, where the Open Dialogue Foundation held meetings with public representatives and official delegations to discuss cases of sensitive importance as the issues of the shrinking civic space in Poland in the light of its Human Rights Council Membership and the violations of fundamental freedoms in Kazakhstan, the shrinking space for civil society in Poland, the post-election scenarios and implications for civil rights in Moldova and Ukraine.

The speakers who intervened to discuss the post-electoral situation in the three countries were Mauro del Barba, delegate to observation in Moldova and Kazakhstan; Lyudmyla Kozlovska, President of the Open Dialogue Foundation; Antonio Stango, President of the Italian Federation for Human Rights; Botagoz Jardemalie, Kazakhstani lawyer and human rights defender, and sister of political prisoner Iskander Yerimbetov; Ana Ursachi, Moldovan lawyer and human rights defender; and Serghei Cebotari, former head of the financial control service of the Moldovan post service, who was sentenced to eight years of imprisonment in Moldova whistle-blowing about a scheme of illegal trafficking of anabolic steroids. Moreover, the President of OSCE PA  George Tsereteli, delivered the closing remarks.

The conference was opened by a speech from Italian MP Mauro del Barba, who took part in observation missions in all three countries. In order to introduce the topic of discussion, he mentioned the situation in Italy: “In Italy, there are strong democratic institutions and instruments allowing for a full democratic participation of the citizens. Still, new phenomena are coming out, one of these being the issue of fake news. Today we will talk about freedom of expression, which is threatened or denied in some countries, but we cannot do it without considering the problems happening in our countries as well, which often come from a clash between the economic and political power. All democracies must go in this direction, being respectful of other countries’ situation.” “While we are willing to listen and to understand the socio-economic equilibrium of those regions, we cannot avoid to acknowledge the almost non-existent respect towards human rights”, he added.

Antonio Stango started his speech by giving his vision on how the elections went in Ukraine: “The elections were organised in a clear, open manner: the access to candidacy was granted easily, the citizens were allowed to vote for their favorite candidate and people expressed themselves freely on social media and independent media”. Unfortunately, the presidential election in Kazakhstan was held very differently. As Stango stated, “It was practically impossible for anybody who didn’t support the government in place to be a candidate, and it wasn’t possible to hold peaceful demonstrations as more than 4000 people were detained in the aftermath of the elections. These signs show that Kazakhstan is struggling with freedom of association, of assembly and expression. We ask all authoritarian countries to abide by international conventions and obligations they signed.”

Lyudmyla Kozlovska further underlined the strength of civil society in Ukraine and the major role this played in upholding democratic standards during elections: “Civil society in Ukraine is considered a role model: despite the threats and the dramatic events lived by activists, they are still able to fight and achieve results. This opportunity to push authorities to change their laws shows a very strong power being in the hands of the Ukrainian civil society. The main difference between Ukraine and the other countries is that citizens have actually had the possibility to choose their favorite candidate for the elections. This is a dream for Kazakhstan, and a possibility for Moldova”.

Ana Ursachi offered her insights about Moldova, focusing on the issue of corruption. “Activists working to support the fight against corruption never had an easy life in Moldova, especially since Plahotniuc was elected and formed his mafia-like government, basically holding Moldova captured through blackmail, corruption and intimidation. This is how Moldova has been perceived until the last elections: a captured state. Then, after months of discussions between the three parties that received most of the votes, on June 7 2019 we finally had a new government. I am aware that it will take a long time for my country to rebuild itself. If I’m here today, speaking in front of you is because you are part of the same international community that helped our activists and our people to resist and survive against the old government, and I’m very grateful about it” said Ursachi. “In this moment, all processes regarding the cases of activists and political prisoners are very slow. That’s why I think it’s important for us to continue to have your support. All we need is to restore the confidence of the people, in order to restore our country.”

After Ursachi’s speech, Sergei Cebotari took the floor to tell his story as a persecuted key witness in the context of a big corruption scheme involving the Republic of Moldova. “I started collecting evidence since 2012, and I presented it to the former Prime Minister of Moldova, who later became part of Plahotniuc’s élite, turning my status from witness to suspect. I was arrested and expelled from the country. I was sentenced for a crime I never committed, and now that we have a new parliament I expect all my persecutors to be judged properly.”

Bota Jardemalie opened her speech by mentioning the struggles of activists in Kazakhstan: “It is getting harder and harder for civil society to participate in events like this.” said Jardemalie to introduce her presentation. “Daniyar Khassenov for example, who was supposed to take part in a PACE event recently but was blocked at the airport by Kazakhstani authorities. This is only an example of the struggles of activists in Kazakhstan”.
According to Jardemalie, the elections in Kazakhstan were designed to look democratic from the outside: “Former President Nazarbayev organised the election in a way to ensure the actual power was staying solid in his family’s hands. He resigned as President but detains permanent power as Leader of the Nation and Chairman of the Security Council, and he also retains major economic powers. This year’s presidential elections in Kazakhstan didn’t comply with international standards: the electoral legislation imposed such complex criteria for candidates to run that it was impossible for any truly independent candidate to run for presidency. We have no opposition parties, as any opposition force have been marginalised as extremists. It’s true, we had seven candidates, all registered very quickly, including a woman, a communist, an opposition candidate. Still, apart from Tokayev, the others weren’t really known to the public. As for the voting, observers noted several violations, from massive bullet box stuffing, abuse of administrative resources, and others. The OSCE itself took into account those violations in its report, which was labelled by Tokayev as “politically biased”.
The aftermath of the election is extremely worrying: “Peaceful anti-government protests were held on election day and during the following days as well, reporting a record number of participants who were brutally dispersed by the authorities. The Minister of Internal affairs had to admit that within three days, approximately 4000 people were detained, even though it is safe to believe that the numbers are bigger, and they are now facing extremist charges.”
“This election showed the instability of the regime in Kazakhstan” she concluded. “What is important to keep in mind is that Tokayev is not seen as an independent leader but as a puppet in the hands of Nazarbayev, useful to grant a stable transition of power and maintaining the status quo. This is why your (the international community’s) support to Kazakhstani civil society is of the essence. Every meeting you hold, any declaration you issue can save somebody’s life.”

The closing statement came from George Tsereteli, President of the OSCE Parliamentary Assembly. At the beginning of his speech, he focused on the importance of giving more space to civil society within the sphere of OSCE’s work and engagement: “As OSCE, in the nearest future, we will enhance the participation of civil society, and we’ll work harder in terms of outreaching and direct work with international organizations”. He also spent a few words on OSCE’s observatory missions to Kazakhstan, Moldova and Ukraine: “We always try to be objective, even if we are aware that when it comes to an election, the implications are not only technical but also political. (…) It’s also important to be vocal about all the bad situations we spot. We are never happy to witness bad things happening, but it has happened, it will happen. Our role as OSCE is not only to identify and criticise issues, but to also find ways to overcome them.”

Among many recommendations, the Declaration asks OSCE countries “to place promotion and protection of human rights at the centre of their domestic as well as their foreign policy agendas” and encourages governments, parliaments and human rights institutions to consider requesting legal reviews of laws and draft laws to the OSCE Office for Democratic Institutions and Human Rights, in order to ensure their compliance with OSCE commitments and requirements. Also, on more specific topics, it mentions the issue of abuse of INTERPOL systems, urging participating States “to combat the politically motivated abuse of INTERPOL systems by respecting the rule of law and, within appropriate INTERPOL channels, urging faithful implementation of INTERPOL’s Constitution and Rules on the Processing of Data, challenging abusive requests for INTERPOL notices and diffusions, calling for greater accountability for abuse, supporting transparency that exposes abuse, and effectively and efficiently communicating with INTERPOL on behalf of victims of abuse, in particular refugees and asylum seekers”.

Some of the most relevant points of the Declaration focus on OSCE’s connection to civil society  organisations: OSCE commits “to protect and promote the work of individuals, alone or in association with others, to know and act upon their rights and freedoms, to peaceably assemble to advocate those rights, to observe the ongoing work of the OSCE and to contribute directly to that work”. Also, the Declaration suggests the OSCE PA to “consider designating a representative among its delegates to serve with Secretariat support as a focal point for public engagement, with the goal of facilitating access of individuals and non-governmental organizations to meetings of the Assembly” as well as “develop and present to the Assembly for consideration proposals to increase opportunities for non-governmental organizations to suggest and work with delegates to organize side events, especially at Winter and Autumn Meetings, within the existing timeframes and venues”.

The Open Dialogue Foundation positively welcomes this declaration and the willingness to make OSCE more accessible to civil society, with the hope to see its successful implementation soon.