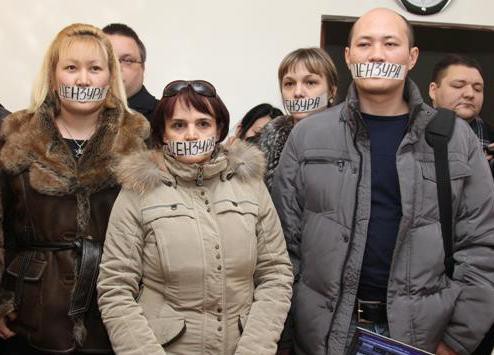 Kazakhstan: the courts banned the activity of the media outlets on the eve of the anniversary of the tragic events in Zhanaozen 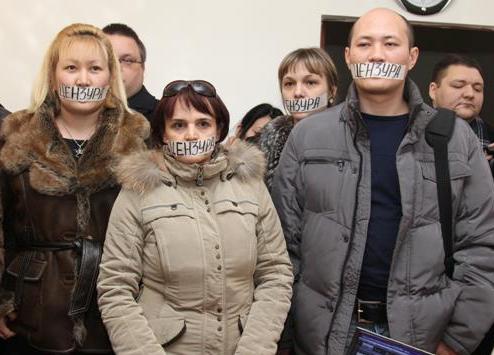 A number of independent media outlets have been banned in Kazakhstan. The court suspended the activities of the “Golos Respubliki” (“Voice of the Republic”) and “Vzglyad” (“The View”) newspapers and prohibited the distribution of online products of the ‘stan.tv’ video portal. The threat of closure is also hanging over the website guljan.org. The prohibition of the activity does not concern just editorial offices of these media, but also the journalists who have worked for the outlets.

Let us remind ourselves that on the 20th November, 2012, the Prosecutor’s Office in Almaty filed lawsuits and motions against the civil associations: “People’s Front – Khalyk Maidany” and “Alga”, as well as against more than 20 media organisations, including the newspapers “Respublika” and “Vzglyad”, the “K+” TV channel as well as the “stan.tv” Internet video portal. Prosecutors requested that these outlets be recognised as extremist and their activity be prohibited throughout the territory of Kazakhstan. In response to the motions filed by the Prosecutor’s Office, on the 21st of November, 2012, the court announced a decision to suspend the publication of “Golos Respubliki” and “Vzglyad” newspapers.

To date, the first court hearings in the case of all the following media outlets have been held:

– “The “Vzglyad” newspaper; On the 30th of November, 2012, in the Bostandyk District Court, the first hearing regarding the lawsuit of the Prosecutor’s Office against the “Vzglyad” newspaper was held. The defence petitioned that an expert who had prepared the report forming the basis of the charges put forward by the Prosecution’s Office, be examined in the courtroom. The court granted the motion. The next hearing will take place on the 14th of December, 2012 (in the Bostandyk District Court – 050043, Almaty, the Orbita residential district, building No. 2).

On the 28th of November, 2012, the editorial staff of the “Vzglyad” newspaper released a collection of articles in the issue called “NeVzglyad” (“Not The View”) totalling 99 copies. According to the law of the Republic of Kazakhstan, should a media organisation issue a circulation not exceeding 100 copies, it is not obliged to be registered with the Ministry of Communications and Information. In spite of the injunction, the editors released the issue of “NeVzglyad” in the form of photocopied pages stapled together. From a legal point of view, the decision of the court to suspend the activity of the media has not been violated as it only applied to the “Vzglyad” newspaper. However, the police seized the full issue of “NeVzglyad” as soon as it appeared on newsstands.

Immediately after the seizure of the circulation of “NeVzglyad”, bailiffs stormed the office of the “Vzlgyad” newspaper and conducted a thorough search of the editorial office. The bailiffs did not hold an official search warrant and presented only the court verdict under which the publishing of the newspaper had been suspended. As stated by the journalists of the newspaper, after breaking into the editorial office, bailiffs provoked a fight; they twisted Guzyal Baydolinova’s arms and pushed lawyer Sergei Utkin; consequently, he sustained a head injury. As a result of the search, several copies of archival newspaper issues were seized. On the same day, the court officers tried to enter the office of the “Vzglyad” newspaper, but they were not allowed inside.

– The “Stan.tv” internet portal: On the 4th of December, 2012, the Bostandyk District Court in Almaty within several hours handed down a decision to suspend the dissemination of the production of the international mass media outlet – “Stan.tv” internet portal www.stan.tv – on the territory of the Republic of Kazakhstan. The trial was held without the presence of the defendant. The judgment states that the internet video portal “contains information which contravenes the legislative acts of the Republic of Kazakhstan”. The decision was issued based on the motion filed by the prosecutor, who quoted the results of the forensic psychological and philological examination carried out by experts of the regional scientific and industrial laboratory in Almaty, in the Department of Justice of the Republic of Kazakhstan in connection with “Kozlov’s case”. Lest we forget that the sentence against opposition politician Vladimir Kozlov and others “in connection with the acts of fomenting social hatred and calling for the violent overthrow of the government and undermining of national security”, handed down by the Aktau City Court, entered into force on the 8th of October, 2012. According to the sentence, “the conceptual content of the materials in the web portal ‘Stan-TV’ is aimed at inciting social discord as it demonstrates the presence of propaganda in support of seizing power by force and destroying state security”.

– Guljan.org: On the 4th of December, 2012, the Bostandyk District Court also upheld the motion of the district prosecutor requesting that the website guljan.org be suspended for 3 months. The reasons for which the suit was filed by the prosecution, have not been revealed. The court decided to suspend access to this Internet resource and the distribution of the online newspaper’s products throughout the territory of the Republic of Kazakhstan.

The “Respublika” newspaper: on the 6th of December, 2012, the Medeu District Court in Almaty held the first hearing regarding the lawsuit filed by the Prosecutor’s Offfice against “Respublika” as a joint media outlet. The court session was held without the defendants, as so far it impossible to determine against whom in particular the prosecutor’s motion was addressed. According to the defence of the independent media outlets, “the lawsuit filed by the Prosecutor’s Office mentions the newspapers and online resources that, under the legislation of the Republic of Kazakhstan, are not legal entities. Thus, they cannot be held liable, as required by the Prosecutor’s Office”. Prosecutor Timur Autalipov stated that the plaintiff, the Municipal Prosecutor’s Office, refused to change the content of the claim. Having heard that, the judge agreed to continue the trial without the defendant’s presence. Representatives of the opposition media outlets requested that the judge postpone the hearing so that they can familiarise themselves with the motion of the Prosecutor’s Office. Judge Gulminar Beysenova granted their motion. The next hearing is going to be held on the 13th of December, 2012 (the Medeu District Court – 050016, Almaty, 34 Nusupbekova Street).

On the 30th of November, 2012, editors of the “Golos Respubliki” newspaper, not willing to breach the injunction issued against a wide number of media outlets named “Respublika”, published their articles in a newspaper called “Azat”. Immediately after the circulation of the “Azat” newspaper reached the newsstands, it was seized by bailiffs.

In the past, the independent media in Kazakhstan have often been subjected by the authorities to various kinds of restrictions so they have come up with alternative methods.

Employees of the newspapers “Golos Respubliki” and “Vzglyad” state that today, not only is the activity of their media organisations banned, but also their individual activity as journalists. They are forbidden to publish their articles in any media, as this would be regarded by bailiffs as a violation of the court’s decision. Tatiana Trubachova, the editor-in-chief of “Golos Respubliki”, addressed the court with a request that it be clarified whether the ban on the publication of the “Golos Respubliki” newspaper is tantamount to a ban on the journalists of the newspaper and on their publishing of any materials. The court refused to give any explanation regarding this matter.

If you wish to show your support for journalists and representatives of the civil society in Kazakhstan, it is vital that international observers be present at the trials and the situation be constantly monitored. For those who cannot take part in the monitoring of the judicial processes, it is requested that you send letters and call the telephone numbers listed below to address representatives of law enforcement agencies and authorities of Kazakhstan with a demand that the persecution of independent media and civil society activists be stopped: