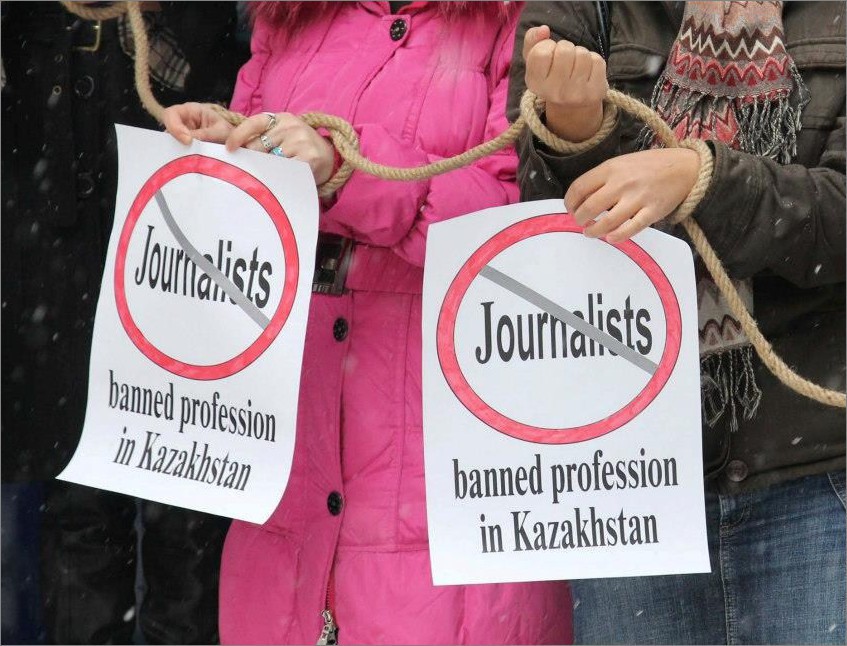 Court hearings in the case against the following mass media outlets: the newspapers ‘Vzglyad’, «Respublika» as one mass media outlet, the «stan.tv» internet portal, the «K+» TV channel as well as the unregistered party «Alga!»

In the period from 22 November, 2012 to 28 December, 2012, members of the Observation Mission to Observe Human Rights and the Rule of Law in the Republic of Kazakhstan visited Kazakhstan. The aim of the visit was monitoring and legal evaluation of judicial processes against a number of Kazakh media outlets (newspapers «Vzglyad» and «Respublika», the «stan.tv» Internet portal, the «K+» channel), as well as of the unregistered party «Alga!». The Mission was organised with the support of the Open Dialog Foundation (Lublin, Poland). The Mission included representatives of civil society from the Republic of Belarus and Ukraine: Olga Chernykh, Olesya Dubovik, Tatiana Ivanochko, Dmitry Belotserkovets, Oles Doniy, Anastasia Rozlutskaya, Nazariy Boyarskiy, Yuliya Khlaschenkova, Ilya Petrovec, Aleksandr Goyshik, Viktor Lutsenko, Konstantin Kozyrev. The members of the Mission visited the city of Almaty, where all the court trials were being conducted.

During the preparation of the report, the main source of information were direct observations of the members of the Mission during their participation in the court hearings and the monitoring of Kazakh mass media outlets. The Report on the outcome of the work of the Observation Mission to Observe Human Rights in the Republic of Kazakhstan has been produced as a result of processing the obtained information.

During the evaluation of the judicial processes against a numer of Kazakh mass media outlets and the «Aga!» party, the members of the Mission were concerned about the following  issues:

– Failure to disseminate information to the Mission members by the Akimat of the city of Almaty and the local Prosecutor’s Office.

– In the motions of the Prosecutor’s Office, the defendants weren’t determined properly. In the case of the «Alga!» party, the lawsuit was brought against an undefined group of people, due to the fact that the party is not registered, and therefore has no legal propriety. In the trial in the case against the «Respublika» newspaper, the term «one mass media outlet» was used, although such a term does not exist in the law of the Republic of Kazakhstan. In addition, the court ruling, just like the petition to sue, filed by the Prosecutor’s office, states the «one mass media outlet» as a fait accompli, which indicates the bias and the political nature of the trial. Moreover, during the trials in the case of the media, a legal action was filed against newspapers – inanimate objects, which are not a legal entity, and therefore, they cannot appear in court as defendants. The trial of the «K+» TV channel was held in the absence of the defendant’s representatives.

– Allegations against the opposition media and the unregistered party «Alga» are based on the text of the court sentence in the case of Vladimir Kozlov, which has been conducted with gross violations of international fair trial standards. The European Parliament in its Resolution of 22 November, 2012, expressed its deep concern over the sentencing of Vladimir Kozlov and stated that the trial, accompanied by numerous procedural irregularities, has led to further restriction of political freedom of the opposition in Kazakhstan. In addition, the opposition media outlets and the «Alga!» party did not participate in that process, and therefore, they didn’t have a constitutional opportunity to defend themselves.

– The judges did not take into account the results of examinations, submitted by the defence.

– The court banned journalists of the «Vzglyad» and «Respublika» newspapers from publishing their articles in publications under different names, which, in fact, implies an outright ban on journalism in Kazakhstan.

Recommendations regarding the improvement of the current situation:

1. The judicial authorities of the Republic of Kazakhstan – paying particular attention to the appeals filed by the newspapers: «Vzglyad», «Respublika», the «stan.tv» news website, the «K+» TV channel and the unregistered party «Alga!», and restoring the rule of law.

2. The Ministry of the Interior, the National Security Committee, the General Prosecutor’s Office and the Ministry of Information – ensuring the unhindered functioning of the media; stopping the intimidation of journalists and the restrictions on freedom of expression, exceeding the specific national legislation and international standards framework.

3. MinistryofInterior – taking steps to protect journalists in the exercise of their professional activities.

4. The Ministry of Foreign Affairs – making possible the visit of the OSCE Representative on Freedom of the Media in the country in order to receive information on the implementation of the commitments on media freedom, which were assumed by the Republic of Kazakhstan within the framework of the OSCE.

5. OSCE Representative on Freedom of the Media – carrying out continuous monitoring of the implementation by the Republic of Kazakhstan of its obligations on the freedom of the media in connection with its participation in the OSCE and facilitating a prompt improvement of the situation, also by means of paying an official visit to the country, as well as by other means of communication at the highest level.

6. Governments and Parliaments of democratic countries of the European Union – developing diplomatic and economic relations, taking into consideration the recommendations of the European Parliament resolutions of 15 March, 2012, and 22 November, 2012. It is important to emphasise that enhanced cooperation between the EU and Kazakhstan is only possible if the Kazakh party makes a major effort to improve the situation of democracy, human rights, and if it guarantees freedom of expression and freedom of association.

7. Professional associations of journalists in different countries,non-governmental organisations, carrying out activity aimed at the protectionof journalistsand freedom of speech – expressing solidarity with their colleagues in the Republic of Kazakhstan, sending letters of support to the persecuted media outlets. Demanding from the Kazakh government the guarantees of freedom of expression and freedom of association in the country, as well as coordinating work with civil society in Kazakhstan through training, visits and seminars. Widespread dissemination of information and education programmes for ordinary citizens, activists, journalists may be of help in developing positive change in Kazakhstan.