In the area of ​​lustration, understood as carrying out a wide review and verification of state officials in Ukraine, the Foundation worked closely with the Civic Lustration Committee, headed by Yegor Sobolev. Analyses, which form the basis for expert opinions and recommendations, subsequently used in the legislative process by representatives of the Civic Lustration Committee and members of the Verkhovna Rada of Ukraine, were produced within the framework of the cooperation. Apart from the expert work, the Foundation also organised study visits for representatives of the Lustration Committee, to the EU countries, where meetings with themanagement of national and transnational institutions, responsible for lustration and observance of law and justice, were held; also, numerous conferences and seminars were organised in various regions of Ukraine. The international conference entitled ‘Lustration: solutions for Ukraine’, has become the key event. It has attracted more than a hundred Ukrainian and foreign experts, law theoreticians, civil society activists, as well as representatives of the media, business and government. In addition, a number of other undertakings, designed to transfer experience from Central and Eastern Europe, were held.

The Ukrainian authorities did not manage to take advantage of a window of opportunity which appeared after the overthrow of the Yanukovich regime. To date, no concerted efforts have been undertaken to implement deep systemic reforms by the President, the parliament and the government.

Delay in the implementation of reform in Ukraine: the authorities should more attentively heed the voice of civil society 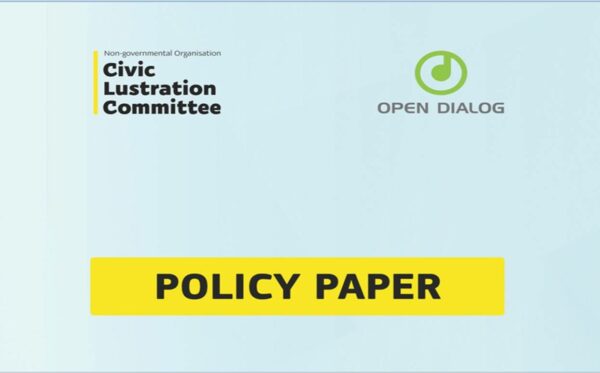 This analysis has been created to present the current status of lustration in Ukraine and reflect the need for it's implementation and improvement. It is a joint work of the Open Dialog Foundation and Civic Lustration Committee.

Current challenges of lustration in Ukraine

A year after Euromaidan, the crimes of the Viktor Yanukovych regime are yet to be investigated. The former leadership of the General Prosecutor's Office should be held accountable for the department’s poor results.

Vitaliy Yarema “achievements”. Results of the activities of the Ukrainian General Prosecutor’s Office: a year after Euromaidan

Yesterday, 26th January 2015 deputy to Verkhovna Rada of Ukraine Andriy Levus together with two other deputies registered initiative to implement changes to the law “On the purification of government”.

The report summarises the problems of Ukrainian lustration in the context of current political circumstances, and describes in detail the work on the act “On Purification of Government” adopted by Ukraine’s Verkhovna Rada on 16th September 2014.

Summary of Legislative Work on Lustration Act No. 4359 “On Purification of Government”

Since late March 2014 we actively support Lustration Committee of Yehor Sobolev by organizing thematic conferences, study visits in the dedicated institutions in Europe and also a direct hands-on consulting on draft law of Ukraine "On Purification of Government".

Report: Collected expertise on draft law of Ukraine “On Purification of Government”

Lyudmyla Kozlovska about the perception of lustration by Ukrainian media