In many Eastern European countries, the work of a lawyer is fraught with many risks: murders and attempted assassinations, criminal prosecution, beatings, threats, pressure on relatives, illegal searches, surveillance, attempts to withhold licenses of attorneys, and slanderous media campaigns. Legislation deficiencies in professional activities of counsels, ineffective law enforcement agencies, and the difficult general situation with respect for human rights all subject lawyers to danger.
The tightening trend of authoritarian regimes insome of the eastern countries is accompanied by an increase in the number of cases of political repression. Lawyers involved in politically motivated cases become, in turn, victims of persecution and pressure.
Several examples are the cases of lawyers being prosecuted in Russia, Moldova, Azerbaijan and Ukraine, as well as cases of prosecution in the territory of European countries (Belgium, Czech Republic) by extra-European authoritarian regimes (Kazakhstan).

Lev Ponomaryov and Emil Kurbedinov were subjected to shocking cases of administrative arrest for posting on social networks. In this way, the authorities continue to apply the policy of intimidation and punishment of individuals who dare criticise the actions of the regime.

Russia: Stop the prosecution of lawyers and human rights defenders

The right to defence is one of the fundamental human rights that is enshrined in a number of international agreements. The Universal Declaration of Human Rights proclaims the principle of equality of all before the law, the presumption of innocence, and the right to be examined openly.

Defence for the defenders: Lawyers and attorneys under attack for participation in politically motivated cases

The International Observatory for Lawyers in Danger (IOL) recently published two statements expressing its concern for Ana Ursachi and Botagoz Jardemalie, both lawyers and human rights defenders, from Moldova and Kazakhstan, respectively.

Year in and year out, Moldova cannot shake off the shackles of corruption, oligarchy, and selective justice. International partners expressed their readiness to render assistance to the country in carrying out the necessary reforms, but they have faced sabotage and inactivity

Report: The authorities of Moldova roll back the democratisation process and fail to fulfill their obligations to the EU

On March 13, 2018, MEPs submitted a written question to the EU VP/HR, Ms Federica Mogherini, on the harassment and persecution of lawyers taking place in Azerbaijan. In their address, P. Auštrevičius, J. Ward and T. Zdechovský made reference to individual cases of persecuted lawyers.

A Moldovan court has sanctioned the arrest of counsel Ana Ursachi. The court session was carried out in the absence of her defenders. The authorities engaged a public defender in the judicial process, which can be regarded as a way to legalise the court decision

Moldova: In violation of the right to defence, court issued an order to arrest counsel Ana Ursachi

The work of a lawyer in the Eastern European member countries of the Council of Europe is fraught with many risks: murders and attempted assassinations, criminal prosecution, pressure on relatives, illegal searches, attempts to withhold an attorney's license, and slanderous media campaigns. 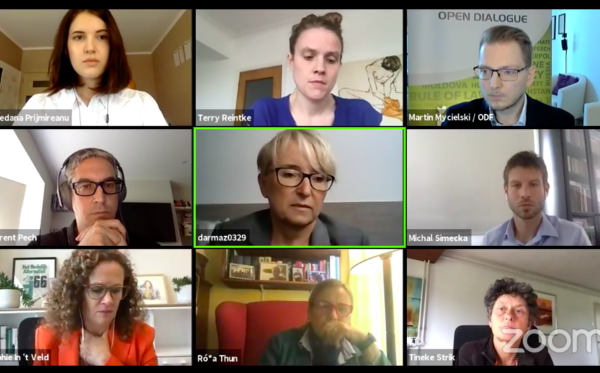